Directed by
Genre
Similar to Versus but not as good 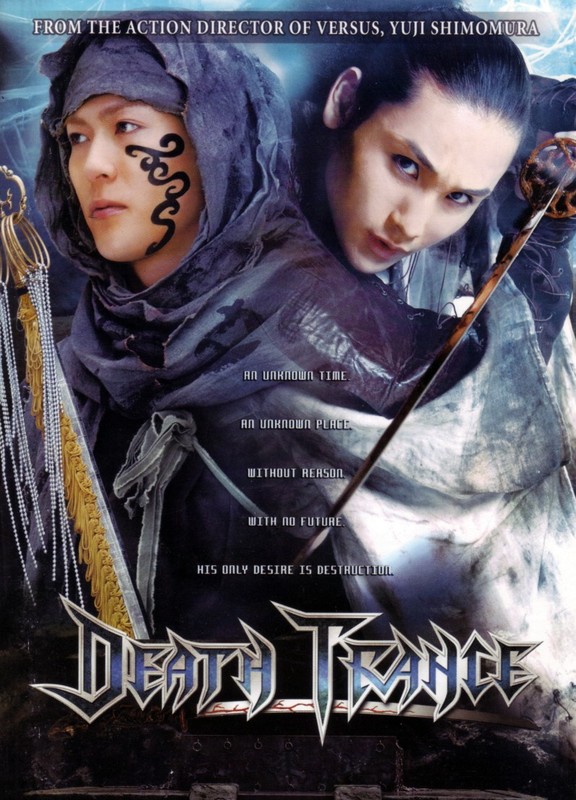 Versus is one of my favourite films of all time, and I've been disappointed by each of Ryuhei Kitamura's subsequent films because they simply aren't as much FUN. "Who was the real talent behind VERSUS?", I have often wondered. Was it assistant director Yudai Yamaguchi? The commentary track on VERSUS seemed to suggest it was, since Kitamura identifies several of the best scenes and ideas as his work or idea... but Battlefield Baseball didn't support the theory (I haven't written him off though). Given that VERSUS is 90% action, Yuji Shimomura surely had to take some of the credit too... and the advance trailers for his directorial debut, DEATH TRANCE, seemed to suggest it might be more than a little. It looked like the film would be the closest thing to another VERSUS that we've seen yet - especially with the photogenic Tak Sakaguchi in the lead role.

... and in many ways DEATH TRANCE is the closest thing to another VERSUS any of the team have produced - an action-packed, low budget movie set in a surreal world where zombies and demons co-exist with super-stylish characters with superhuman powers and no back story, who seem to exist primarily for the love of a good fight! Well, that and the fact it's set mostly in a forest :-)

Unfortunately, despite being similar to VERSUS in many ways, DEATH TRANCE is still not as good - it lacks several of the elements that made its big brother so much fun - e.g. the gore and ultra-violence, and some of the blacker humour. Mostly though, it lacks the fluid and kinetic camera work that really helped VERSUS to transcend its budget. Although the action scenes feature some great imagination, they feel a lot "cheaper"... mostly because of the camera work. Although the character designs are extremely stylish (even more so), the camerawork doesn't take their "coolness" up to such absurd levels. I guess one of Ryuhei's major contributions to VERSUS was his gift for composing a shot.

It's always a little unfair to judge a film solely by comparison to another, but since "make something like VERSUS" does seem to have been the mission of this film it's not entirely unreasonable, and of course I'm not the only person hoping to see the VERSUS experience recreated one day. DEATH TRANCE isn't quite it, but it's a pretty good effort that's enjoyable enough in its own right. I suppose the answer to the question "Who was the real talent behind VERSUS?" has found an answer though - it was... everyone! It was one of those serendipitous coming togethers of various talents who complemented each other, resulting in a work that was better than anything they could have made without each other.

Anyway, despite being a little disappointing, DEATH TRANCE is still definitely worth a watch - not a masterpiece, but still vastly more interesting and entertaining than any trillion dollar Hollywood action movie of late :)