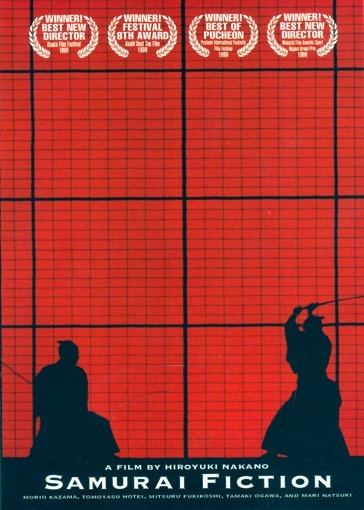 A Parody Samurai movie... i.e. they didn't have the guts to make a genuine Samurai movie in this day and age, so there's some tacked on over-acting etc to make sure the audience knows that they know that Samurai movies are cheesy and cliched. Kind of like for years nobody could make a serious horror movie, or modern attempts at Westerns have to be post-modern or die of embarrassment.

In this case, Samurai Fiction dies not of embarrassment but of boredom. Totally dull characters doing totally dull things. Some of the black & white photography is pretty, but I kept wishing there was at least some colour to build a little interest. I fell asleep after about an hour, but my colleague tells me it got better to the end when they stopped trying to be 'parody' and just did what they clearly really wanted to do, which is make a Samurai movie.

Currently I feel absolutely no inclination to confirm this for myself.