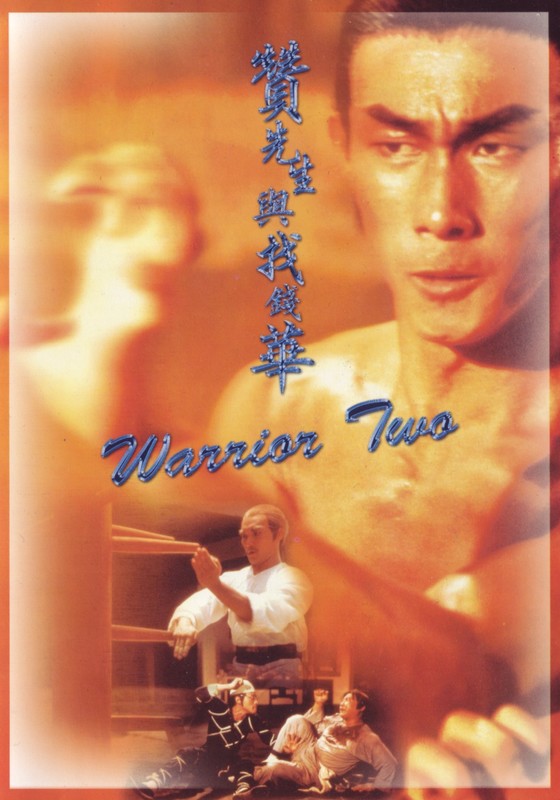 A group of bandits set up a bank in a small town with the proceeds of his crime, and plot to kill the village head in order to take over the town so that they can live like kings. The bank's cashier (Casanova Wong) catches wind of their plans, but the first person he trusts with the information nearly costs him his life. His second confident, Sammo Hung, is a much better choice, and he tries to enlist the aid of his Wing Chun instructor (Leung Kar-Yan) to teach the cashier some skills so he can protect himself and fight the bad guys.

Wing Chun has been a popular school of martial arts for Hong Kong filmmakers, despite the fact that it emphasises economical movements which are not well suited to the dramatic exaggeration typical of martial arts cinema, so most films about Wing Chun actually feature little genuine Wing Chun. WARRIORS TWO is an exception to this, intended as a showcase for the principles and techniques of the Wing Chun style. The training sequences certainly showcase the technique well, though once it comes to fight time things are necessarily a little more flexible

The film has a basic three act structure - the first section introduces the various characters, good and bad, through a series of scenes that vary between the dramatic and the comical (Sammo and Dean Shek get most of the comedic scenes, whilst Casanova Wong and Leung Kar-Yan are allowed to preserve their characters' dignity). The middle section, probably the longest, primarily focusses on the cashier's training in the art of Wing Chun, whilst the villains helpfully disappear. The third act is basically when the good guys strike back.

WARRIORS TWO marks the beginning of Sammo Hung's golden streak as a director, and was one of the front runners of a transformation of martial arts films (along with Snake In The Eagle's Shadow) into kung fu comedies, a movement which had a profound impact on the genre and which propelled Golden Harvest to the top of the Hong Kong movie world, supplanting the previously dominant Shaw Brothers studio, which failed to move with the times. Although it feels much like a Shaw Brothers film at times, Sammo's vision and talent is beginning to show through, and he assembled a fine team of skilled martial artists to help him realise it. Although he tends to play bumbling, somewhat stupid characters in his films, it is clear that Sammo is a very smart and shrewd director, who plays the clown on screen simply because he knows he does it very well.

Casanova Wong is the other 'warrior' of the title, one must assume, and the Korean kicker delivers a great physical performance, though Sammo wisely doesn't ask too much of him in the acting department. Leung Kar-Yan has tremendous presence, as always, as the stoic Wing Chun master whose philosophy that "someone must give way first to avoid bloodshed" is proven to be not entirely flawless, but whose exposition and demonstration of Wing Chun can not be faulted. As the film is moving into Kung Fu Comedy territory, an appearance by Dean Shek was presumably mandatory - he is irritating, as usual, but his character in this film is probably the best example of his particular shtick.

The film features some great fight choreography, showcasing the techniques of Wing Chun and other styles, in a way that is only possible when you have a cast that have been training in martial arts since they learnt to crawl. There was a time when I would have rated it an 8 or a 9, because I could happily watch films like this all day long, but after consuming so many of them I finally overdosed and now my brain tends to switch off and my attention wander whenever people start fighting on my television... which is a problem in a film like WARRIORS TWO. However, I can still appreciate what a well-made film it is for the genre, and its importance in the genre's history, so if I have to mark it down a little bit it is more because the genre itself doesn't satisfy me as much as it once did than because of any failings of the film itself.

2022 Update - my brain learnt to appreciate martial arts again, and this film is an easy 9/10