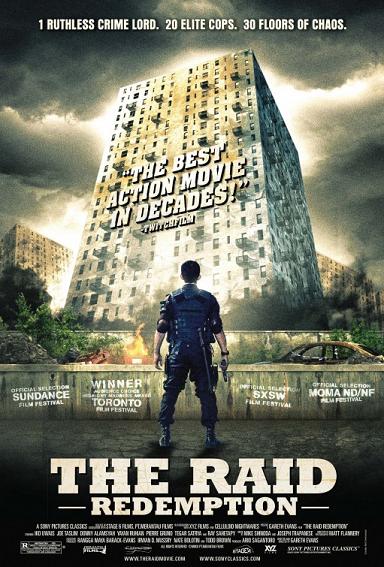 A team of Indonesian SWAT members raid a block of flats owned by a notorious crime lord, and home to a motley assortment of gang members and criminals. It does not go well.

Remember the buzz that built up around Ong Bak before it was released? The rumours of a new martial arts talent to rival Jackie Chan and Bruce Lee? The word that it was a throwback to the kind of full contact stunts and fights that Hong Kong seemed to have forgotten how to make? Remember the thrill when you got to see it and it actually delivered? How impressive Tony Jaa actually was? Well, THE RAID: REDEMPTION is like that all over again, and then some.

Directed by a Welsh man living in Indonesia, THE RAID: REDEMPTION is a pure-blooded action film, wasting almost no time on narrative set up and jumping straight into a string of some of the most remarkable action scenes in living memory. The film starts off predominantly gun-based, with some terrifically brutal and explicit violence being meted out in large quantities right from the start. Both sides are quickly whittled down in numbers, and out of ammo, and from then on things move mainly into hand to hand and melee combat with a lot more one on one encounters (or one on many), showcasing some staggeringly talented fighters and some incredibly dangerous looking stunts. The cast and stuntmen are clearly very talented and dedicated - willing to take serious amounts of damage in the pursuit of their art. If Hong Kong had the most daredevil stuntmen of the 1980's, and Thailand of the 2000's, Indonesia seems to be making a bid for the crown in the 2010s. This is the kind of film that Hollywood could never make, primarily because of health and safety regulations. 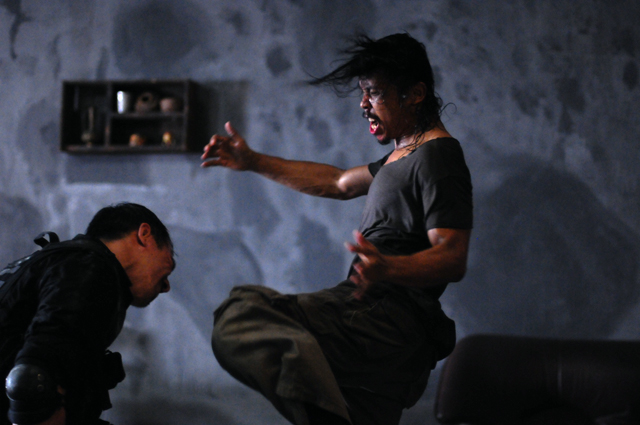 Gareth Huw Evans is the man behind the camera, and he shows a considerable amount of skill. Production values are high all round, with some brilliant camera work and surprisingly good special effects. I can't imagine it was a high budget project, but the money was certainly well used. It looks good, sounds good and is very precisely shot and edited. Hollywood fight scenes have always been ruined in the editing room, and lately even Hong Kong's cameramen and editors seem to have forgotten how to shoot a fight scene so that you can actually appreciate the skill of the performers involved. Evans clearly understands the importance of showing us what's happening without cutting away to inserts, or zooming in so close that it's all just a vague impression of violence. Every move and every fall is shown in often shocking detail. Of course it helps to have a cast who can really do the moves, and really take the falls, so that you're not relying on camera placement and editing room tricks to mask the fact that not all that much is actually happening.

It's films like this that I live for... honest, unpretentious physical virtuosity - and terrible, terrible violence :D As soon as I saw the trailer for THE RAID: REDEMPTION I was itching to see it, but I wimped out on making the trip to the cinema to catch it when it was released here - shame on me! At least I finally got around to seeing it on DVD... and it was certainly worth waiting for.