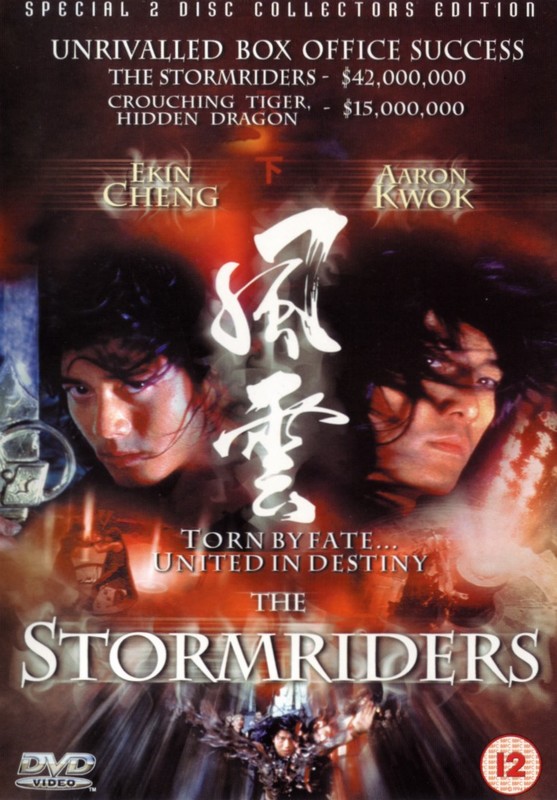 Prophecy says that if Lord Conquer can take on two disciples with particular birth charts he will be invincible for ten years. What happens then is apparently a secret, but Conquer is confident it must be something pretty good so he sends his men out to find two boys that fit the bill. Ten years later Wind and Cloud have been raised by Lord Conquer, but whilst Cloud remembers the circumstances of his father's death at the hands of Conquer's men, Wind believes another swordsman killed his father and Conquer rescued him.

Impatient to find out what the rest of his destiny holds, Conquer sends Wind out into the world to find the prophet Mud Buddha, and Cloud to assassinate his strongest rivals.

THE STORM RIDERS was one of the first big films to come out of Hong Kong post-Handover, a film which took full advantage of the opportunities to shoot in lush mainland countryside, and a pioneer in using CGI to realise the kind of fantastical action scenes depicted in Chinese literature and comic books. It was based on a Hong Kong comic by Ma Wing-Shing, and its style is thoroughly influenced by that medium.

THE STORM RIDERS was also the first Hong Kong film that I saw when it was "new", as it was released on Australian VHS not long after it debuted in Hong Kong, which was not long after I became interested in HK cinema. I was absolutely blown away by it - a genuine epic with some stunning cinematography and ground breaking effects work. As I was working in video games I was especially impressed by the CGI, knowing how difficult it was to produce action of this calibre with the technology of the day - remember this was the PS1 era. I watched the film over and over - it's one of my most watched films - and studied the effects work closely for inspiration.

I think it's fair to say that my opinion of the film was not the consensus view, at least amongst Western enthusiasts. Many were the teeth gnashed anticipating that this marked the end of traditional martial arts films starring physically gifted performers and practical stunt work... it would all be pretty boy pop star waving their arms around in front of a green screen from now on.

My view was that this was a false dichotomy - this film introduced something new into the world, something which didn't exist before, but that augmented rather than replaced the practical action that Hong Kong was known for.

It looked like the detractors were going to win the argument for a while, as Hong Kong did basically stop making martial arts films with actual martial artists for quite a long time, with the exception of some very low budget things like Chinese Heroes. I don't think that was really the fault of THE STORM RIDERS though, it was the way the wind was blowing well before Andrew Lau and Manfred Wong realised they could use computers to turn Aaron Kwok and Ekin Cheng into fighters.

It wasn't like there was suddenly a wave of CGI enhanced martial arts films either - there were a few, mostly from the same team, but with obviously lower budgets and less inspired scripts that didn't capture the same qualities, so they petered out after a couple of years. The high production values of THE STORM RIDERS did show local audiences that Hong Kong still had something to offer in a world increasingly dominated by Hollywood, and helped to establish a new presence for the industry following the mass exodus of many of its biggest names in the run up to the handover.

Films like this are ten a penny these days of course, mostly coming from Mainland China though often employing Hong Kong talent behind the camera. There's also plenty of non-CGI martial arts films coming out too though, so I will claim that history has proven me right and there is a place for both.

22 years later the effects in THE STORM RIDERS look pretty laughable, compared to the sort of thing that is commonplace these days, even in mid-tier TV shows. Computers are a lot more powerful now, and the software they run is equivalently more advanced. Perhaps most significantly, an entire generation has grown up with CGI effects and the tools and resources that allow them to learn how to create them. They can thank Centro pictures pioneering work here for that situation - at least in part.

Films like A Man Called Hero proved that cool CGI effects alone aren't enough to carry a film, and I maintain that THE STORM RIDERS succeeds where others failed because it is actually a good film. The story has some emotional weight, the characters are cool, the cinematography is stunning and the whole thing is tightly edited. It looks like it was an expensive film to make (I vaguely remember the VHS saying it set new records with its budget), and it is visually opulent. It features some elaborate sets and fancy costumes as well as the stunning natural (and artificial) scenery of its shooting locations.

It's a very plot heavy film - it's amazing just how much happens in two hours. It's not a deep film (greed and hubris contain the seeds of downfall), but it effectively sets up its themes and conflicts and assembles all the pieces into an arc that delivers an impact.

Aaron and Ekin came in for quite a lot of criticism for their acting, and in Ekin's case I think that's probably fair here, his hair does do most of the work, but Aaron was already showing signs of being at least competent - he instils Cloud with just the right mix of brooding resentment and repressed fury, and is undeniably cool. Sonny Chiba is the real star of the show though, giving Lord Conquer charisma and gravitas despite very obviously being dubbed into Cantonese.

Shu Qi also makes a good impression in one of the first films to cast her in a substantial role that didn't involve taking her clothes off. Her goofiness adds a touch of levity to a film that would otherwise perhaps be a bit too serious... it's a shame the same can't really be said of Kristy Yeung.

I was a bit apprehensive rewatching the film in 2021, at least ten years since my last viewing (probably more), but I think it's held up well enough even if other films have since done what it does better. I think it suffered mostly from people judging it for the things it is not, rather than on its own terms. It's not Kung Fu Cult Master, it's not The Bride With White Hair, but it was a bold new way to present Hong Kong's wu xia heritage on screen.