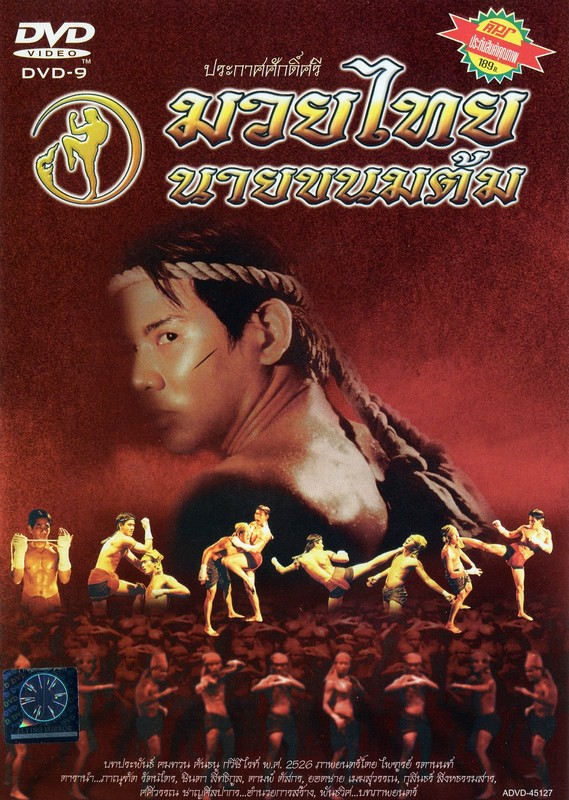 After watching the wonderful ONG BAK I was quite in the mood for some more Muay Thai action, and as luck would have it I had another DVD lying around that promised some - "MUAY THAI - NAI KHANOM THOM" (roughly translated as "Muay Thai - Something" :p). MT-NKT tells the story of a guy who gets beaten up by local fighters, and manages to persuade a mysterious long haired man to teach him to fight. Once he's learnt some skills he decides to go off to a forest that may or may not be home to Bang Rajan and learn more skills to fight off the invading Burmese.

He gets there and discovers the local fighters are in a bit of a mess because of the rivalries between the schools - in particular, one young fighter who is reckoned the best in the land and his teacher have an ego problem that makes it hard for them to cooperate with the other fellows. This fighter takes a real dislike to the hero, because of the interest the town hotty shows in him. Conflict!

MT-NKT was clearly made in the aftermath of Ong Bak and Bang Rajan, and attempts to combine the strengths of the two into a strong Muay Thai historical epic. Except, on 1/100th of the budget of either. More than just budget is lacking, in fact - all forms of talent and experience in the art of filmmaking are also curiously absent. The film manages to go beyond "amateurish", to the point where one is led to speculate whether we are witnessing an alien invasion, by a species that caught extraterrestrial transmissions of ONG BAK and BANG RAJAN and concluded that the Thai film industry was the centre of the world's power base. The aliens, it appears, have the technology to replicate our bodies almost perfectly, but they don't understand our ways of making film at all.

Eventually, however, I concluded that the alien conspiracy theory is probably not correct - it's just that the makers of the film really didn't know what they were doing. Part of the problem undoubtedly comes from the fact that most of the cast seems to be real Muay Thai students, not actors - or even reasonable facsimiles of actors. Or writers, directors or cinematographers.

Still, since Muay Thai action was what I was really looking for, their skills do somewhat compensate for their weaknesses. There are some fight scenes featuring the same kind of bone crunching full contact Muay Thai that made ONG BAK so compelling - but the fighters are clearly more trained for real Muay Thai competition, so there's none of the stunning acrobatics and stunts that Tony Jaa pulls off in ONG BAK - just people hitting and kicking each other quite hard. That would be good enough for a time passer, but the film commits one further huge mistake - it tries to incorporate sword fights too. The sword fighting is so bad it's quite comical - they can't do the full contact stuff, so it's really just a lot of waving swords around each other, filmed in a totally unflattering manner. Unfortunately, these dreadful sword fights make up at least 50% of the fight scenes. Muay Thai good, sword fights baaaaad.

Further problems arise from the fact that the film is terribly post-dubbed (perhaps making it a little unfair to judge the acting), and the Thai DVD features truly atrocious subtitles. Actually, the subtitles turned out to be a blessing in disguise - they may not make a lot of sense, but they're quite entertaining. There are a huge number of very quotable lines, which would probably have been totally vacuous if they'd actually made sense. In fact, I think I had more fun trying to decipher the subs than I did with the fight scenes in the long run :)

So, all is not entirely lost in a film that scores dismally on almost every "standard" criteria by which films are judged, but the many flaws are enough that I can't really recommend seeking it out. If you happen to find the DVD lying around when you've just watched ONG BAK and you've nothing much else to do, then there is some merit to be had in watching it. Of course, if the alien theory is true it may be essential that everybody see this film - at least to ensure themselves that our world film industry is safe even if we're all going to be alien food additives in a few years :)