Directed by
Genre
Undoubtedly expensive but lacking something 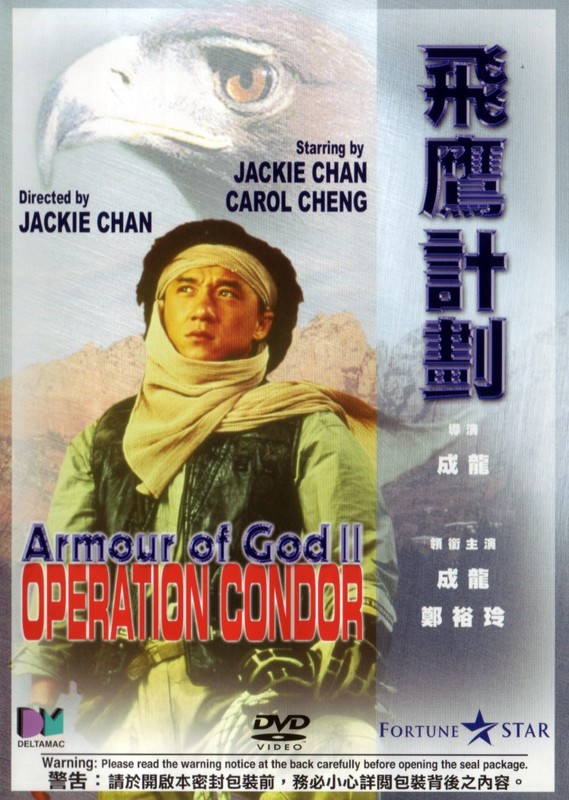 Jackie Chan returns as globetrotting treasure hunter Asian Hawk (or Jackie to his friends) in this sequel to Armour Of God, released a respectful four years after the original. This time Jackie is hired by the United Nations - allegedly - to go and look for 200 tons of Nazi gold that was hidden in the Sahara desert and lost to history. Carol Cheng is his assigned partner and he opts to take along Eva Cobo De Garcia as the last living relative of the Nazi officer (Spanish?) that took the gold to its desert hiding place.

The film's indebtedness to Indiana Jones is obvious, but the film also gives Jackie a chance to pay homage to the silent comedians he admires, with a lot of slapstick and physical comedy throughout - and of course liberal helpings of the kind of acrobatic stunt work we expect from the maestro.

OPERATION CONDOR was clearly a film with a much higher budget than most Hong Kong productions could ever dream of, and this is reflected in the international shooting locations and the massive and presumably bespoke set in which the final leg of the film takes place. It opens James Bond style, with the climax of a previous mission to give us an action-packed start to the film, where we see Jackie using some interesting technology to show us something we almost certainly hadn't seen on screen before. It sets the tone quite nicely.

From then on action comes regularly in small bursts, as does comedy, with the plot somehow proceeding without much actual contribution from the protagonists until they eventually locate the secret bunker where the gold awaits... as do the bad guys about half a minute later. From that point on it's basically 30 minutes of stunts and skits until the credits roll.

I don't really know why but I've never particularly enjoyed OPERATION CONDOR, it just seems to be missing something to me. The thinness of the plot means that I never really feel engaged with what's happening on screen, and the characters' motivations are so nebulous that I absolutely don't care if they get the gold in the end or not. It's an action film though, we all know the plot is really just a semi-plausible explanation for why Jackie Chan keeps getting into fights and has to perform a series of death-defying stunts. It does help if we care about the characters though, so that their defying of death seems... significant.

The film's casual racism certainly isn't a selling point, but it's far from the worst example from the time and place. The clownish buffoonery of the two "Palestinian" characters (definitely not Palestinian actors) is too juvenile to take real offense at it (YMMV). The film feels a bit condescending towards its female characters, but it's not as if the men in their lives are shown any more respect.

So what about the action? Well, it's pretty good... I guess? The film clearly had the budget to enable Jackie to stage the kind of intricate fight-stunt scenes that he wanted and to shoot as many takes as it took to get them right. It is all very impressive on a technical level, but the action seems to be undercranked more than usual for a Jackie Chan film, which is quite unnecessary given the speed and intricacy of the choreography - as a result it all happens so fast it's quite hard to take it in. By the time your brain registers that something impressive just happened it's already trying to process the next move, so it's a bit of a blur.

Tradition demands that there be some sort of elaborate set piece to end the film, and a sequence in a giant wind tunnel is certainly elaborate, with the characters getting blown and thrown about the set quite creatively as the machine's settings are changed. It barely qualifies as a fight scene though, since the opponents are mostly just fighting to stay upright, and it's mainly played for laughs, so it doesn't deliver the kind of endorphin rush of e.g. Jackie's showdowns with Benny Urquidez in Wheels On Meals and Dragons Forever.

I felt like I might be in a minority with regards to this film, but a quick survey of reviews on some fellow sites shows that I'm definitely not alone. It does seem to be quite divisive, with some ranking it amongst Jackie's very best and others finding it a bit uninspired. Nobody seems to think it's a bad film, but I guess it either grabs you or it doesn't. There's plenty of craftsmanship to appreciate, but it's not a film that leaves me with a massive grin on my face like Police Story.

Sequel to ARMOUR OF GOD