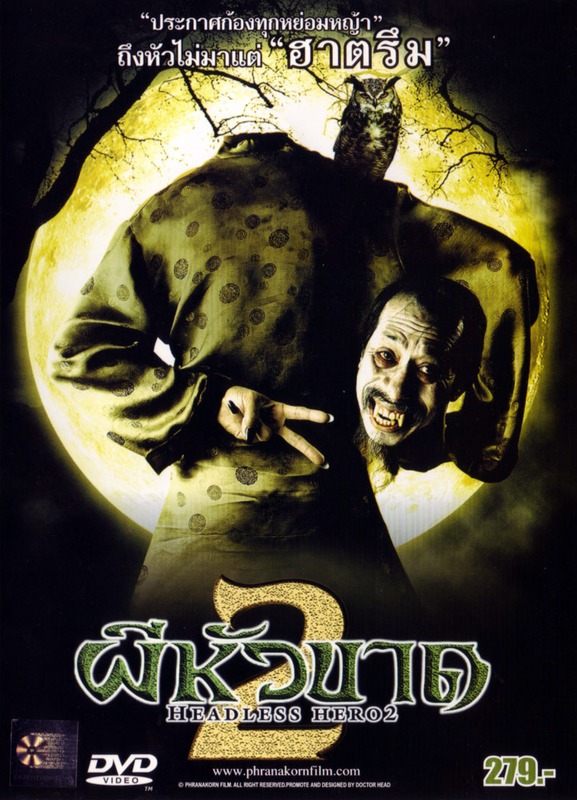 2003's Headless Hero was one of the surprises of the year, being a comedy-horror from Thailand that didn't suck. In fact, it was rather good, thanks to a decent story, promising young male lead, good production values and some inventive special effects. Perhaps because it kept the comedy in the background too. If you've seen the film, you may be a little surprised that it's spawned a sequel, since the plot didn't naturally suggest one. The sequel is pretty much a "name-only" sequel as it happens though, and it eschews pretty much all the things I listed as virtues in the first film in favour of... well, not having them, basically :(

The first PII HUA KAAD didn't exactly have the tightest scripting, but this helped to keep the film fresh and interesting as it went in sometimes surprising directions. PHK2 also does not have tight scripting, but rather than "unexpected and interesting", it wanders rather close to "incoherent" in this film. The overall story just about hangs together, though due to some bad editing it takes more brain-power than necessary to realise that it's actually a very inane tale. Strangely, the ending credits include clips from a bunch of deleted scenes, some of which would seemingly have really helped to make the story flow better and make sense. Perhaps their removal was a deliberate attempt to obscure the fact it wasn't very interesting.

If those scenes had been replaced with quirky, inventive or amusing scenes it might have been a wise decision, but the bulk of the film consists of really dull humour involving stupid people doing stupid things. I'm not sure where the idea originated that giving the hero a really annoying, stupid, cowardly best friend and sidekick would make him seem more heroic in comparison... but I wish it would go away. And transvestite side characters who bear the brunt of some stereotyping and bigotry for comic effect then die unpleasantly aren't exactly welcome anymore either. Some of the comedy is undoubtedly lost in translation, but there are plenty of scenes that don't rely on verbal humour, and none of them are funny, so I don't really expect the wordplay is very amusing either, even if you do speak the language. The soundtrack composer tries overly hard to convince you you're being amused, which isn't a good sign. Or soundtrack :p

Maybe I'm being unfair to the film, and it just caught me in the wrong mood - or it suffered due to high expectations from the first film (which in turn probably benefited from low expectations when I watched it), but I don't think I am - I think HEADLESS HERO II is genuinely a poor film. It is a little better than the bulk of the "horror comedy" films from Thailand, but that's not really saying much given that most of them are unwatchable. HH2 at least has decent production values and is just about watchable, though I don't think I'd go so far as to say "enjoyable".

BTW, PII HUA KAAD has acquired an official English translation for its second cinematic outing. The literal translation is apparently "Headless Ghost", which makes sense for both films, but the official English name is now "Headless Hero (2)". Unfortunately, this translation proves to be completely inappropriate for the second film... the only headless guy here is definitely not the hero.