Directed by
Genre
Cliched and redundant 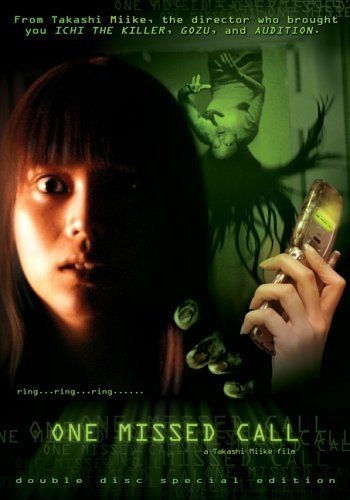 Takashi Miike pretty much admitted that he made this film because he needed a commercial hit that made some money, so he turned his attention to the "New Japanese Horror" subgenre, aka "Scary Phones".

Basically, people keep getting "One Missed Call", and when they check the message it turns out the call comes from themselves, but a day or 2 in the future. They hear themselves dying. Then a day or 2 later, they die. A girl and a guy are a bit upset and puzzled (because it seems to be mostly their friends dying) and try to find out what's happening - and naturally the matter is made more urgent when one of them gets the missed call.

OMC basically takes a lot of Ringu, a chunk of DARK WATER and a smidgeon of KAIRO and mixes them all up without any particular purpose or discretion into a big old scary mess. There's probably other films in there too, but those are perhaps the only 3 I've seen since I'm not much of a horror fan. All the usual cliches turn up somewhere or another though - phone messages, long black hair, spooky kids etc etc, and none of it makes any sense whatsoever. But that seems to be a standard feature for Japanese horror films, which is the main reason I am not much inclined to watch them.

None of the story is very suspenseful, because the film tells you who's going to die and when they're going to die, and even hints at how it will happen. Then it happens. Huzzah! There are some scary moments, but they're entirely created through sound, music and cinematography, rather than any kind of appeal to the rational part of the mind. If you like that sort of thing, all well and good, but it seems rather perverse and pointless to me.

I certainly wouldn't put this in the same league as Korean films like A Tale Of Two Sisters and THE UNINVITED, that take the same post-RINGU horror vibe and manage to make actually good, somewhat thought-provoking films out of it.

Oh well, if Miike has to make a film like this once in a while to keep his funding coming, I can forgive him - as long as he follows it up with an Audition or a Gozu or something to compensate us!