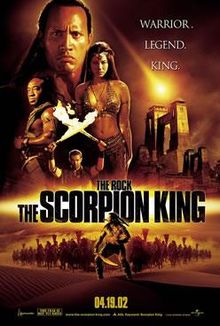 The problem with the Hollywood studio system is that movies are so tightly bound to the initial script, and very little on-set creativity is allowed. Sometimes this is ok, but usually it's placing far too much trust in the scriptwriter - trust that few scriptwriters deserve, from experience. The Scorpion King is a good example of this - a movie that is in many respects well made, but shackled by a lame cheesy script. But hey, it's a Hollywood action movie... if you go in expecting anything else then you're only suckering yourself.

The flaws in the script are numerous, but best represented by the pointless inclusion of an annoying comedy sidekick and a cute street urchin. These feel like rejects from a Disney movie, and really had no place in this film. Maybe they're what got the movie its PG-13 rating, which I think was actually a poor decision. Scorpion King is a very violent film - people are slaughtered in the hundreds, and 90% of the killings are executed by the good guys. True, you may not see any blood, but the cabbage slicing sound effects fill the role just as well.

But violence is rather unavoidable in an action movie, which is what the movie primarily is. And the action is actually very good by Hollywood standards. The influence of Hong Kong choreography and camerawork is clearly felt, though the action is still dominated by American big muscles and testosterone in the end. Well staged and filmed though, and quite satisfying.

The movie also scores well on production values - the costumes and sets are all very evocative of the time and place in which the movie is set (though some of the CGI used to create certain scenes could have been better). It's a good looking movie, and not just the scenes with Kelly Hu.

Overall verdict, not one to watch over and over, but a pretty good popcorn experience.