Directed by
8/10 - Amazingly bleak film, and quite shocking to watch 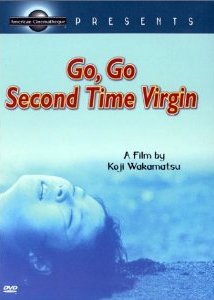 First things first - quite possibly the best name for a movie ever! A strangely jaunty, optimistic sounding title for such a grim and nihilistic movie though.

"If you tell me why you want to die, then I'll kill you"
"Really?"
"Yes?"
"It's because I'm so hopelessly unhappy in this life"

(Bit of an approximate quote there I'm afraid).

GGSTV! opens with a 17 year old girl being dragged to a rooftop and raped by a gang of thugs, whilst a boy of a similar age watches on expressionless. The sun rises the next day to find boy and girl still in the same positions, sat in silence until the girl rises and wishes him "Good morning". Awkward conversation arises, and the girl reveals that this is the second time she's been raped. She is surprised to find that she has bled this time too (hence the title, which is actually a line from a song she sings to herself). The conversation progresses little better when she asks the boy to kill her.

Throughout the course of the day, the boy lets her into his own life a little, which we find to be at least as f***ed up as hers. I don't know what it is about the Japanese, but they seem to have a knack of producing the strangest and most disturbed movies in the world. Takashi Miike might be shocking audiences and provoking walk outs now, but 32 years ago Koji Wakamatsu was producing movies that were at least as dysfunctional and disturbing. Whilst the west was having flower power and free love, Japan appears to have had quite a different approach to the hippy movement (though this may not be an entirely representative sample!).

If GGSTV! were to be made now, it could only be a student film, and it would be largely criticised for its naivety, probably accused of being self-indulgent. And for having some truly awful acting. But movies in general were different in 1969, and GGSTV! was certainly a pioneering film and seemingly quite sincere in its bleak world view. It feels in many ways more 'film' like than most movies today... the cinematography is all very photographic, as is the way the interesting soundtrack is blended with the movie - definitely 'cinema as art'. I'm not going to suggest it's a great movie, but it is fascinating and provocative, and deeply bleak and depressing, so that might appeal to some :-)