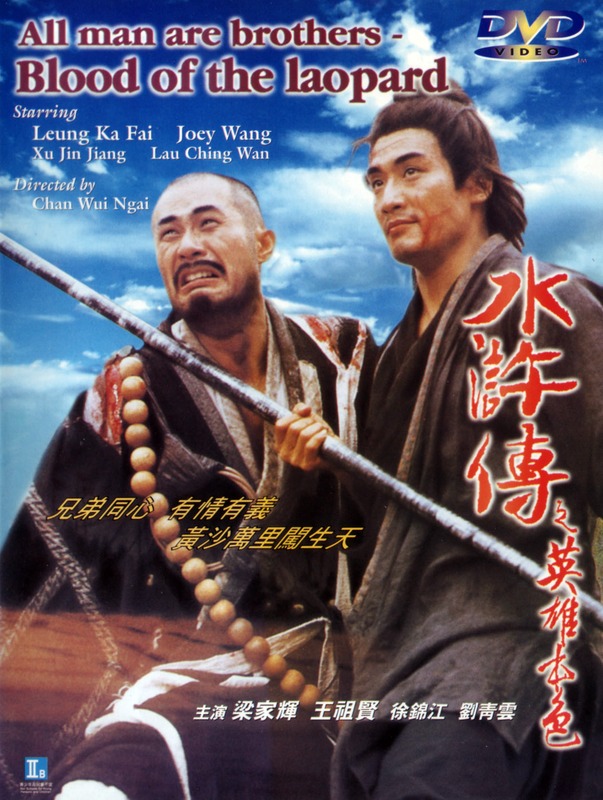 Tony Leung Ka-Fai is the leader of a general's army, honest and just. Elvis Tsui is a monk, loud and hot-headed. Both are masters of kung fu, and despite their differences they become best of friends then declare themselves brothers. When the general's whiny, spoilt son takes a shine to Leung Ka-Fai's wife (Joey Wang) he frames the husband to clear the path to his wife. Leung Ka-Fai believes he should submit to the law and accept punishment, whilst Tsui believes in fighting for honesty and for his brother. Perhaps they can learn something from each other?

ALL MEN ARE BROTHERS: BLOOD OF THE LEOPARD is a riotous fantasy, with devastating kung fu stances taking out half the scenery at regular intervals. The wirework and the editing are quite unrestrained, and though the action scenes look a bit amateurish at the beginning they certainly find their stride by the end.

Elvis Tsui steals the show as usual, running around drinking, shouting and smashing rocks with his head like a good monk. It's great to see him playing a good guy for once. Big Tony turns in a respectable performance, as does Joey Wang. Lau Ching-Wan only has a small part, as a chirpy young man from the country. The only annoyance is the general's son, whose whining brat character is clearly supposed to be annoying, but just comes across as badly acted.

Overall, it's a good fun film with enthusiastically over the top fights and stunts, and quite a strong story behind it. Should be better known than it is, really!