In the near future, Japanese society has broken down. The children are rebellious, and the adults are afraid. In response, the government enacts the Battle Royale Act, whereby each year a class of school children around the age of 15 are randomly selected and sent to a deserted island for a three day trip... with the proviso that only one of them is allowed to leave at the end. Each student is provided with a random weapon, and fitted with an explosive collar to deter them from trying to escape. There are no rules except 'kill or die'.

Quite what exactly the government hoped to achieve with this plan is never explained in BATTLE ROYALE, either the film or the novel. It is acknowledged, however, that it is a metaphor for the Japanese educational system - one of the most high pressure environments for teenagers in the world, in which competition is fierce and many are driven to suicide. Many others are driven to disengagement, however, with class discipline apparently being entirely absent in many schools, leading to pupils turning up but sitting around doing anything but study. It is this attitude that Kitano, the current year's former teacher, blames for the students being in their current predicament.

At the start of the film there are 43 students in class B, but two of them don't even make it past the introductory video which explains the Battle Royale to them (itself a brilliant piece of satire, being hosted by a super-cute girl dressed in a sexy parody of military fatigues). Kitano (played by Takeshi Kitano) has a grudge against class B after one of their members wounded him with a knife, and seems to have little compulsion about sending them out to their competitive deaths.

There are two strangers in the group as well, both older and clearly not as surprised by their predicament as the rest. Kawada (Taro Yamamoto) eventually reveals himself to be a former winner of the game, forced to return to 'mix things up a bit'. Kiriyama (a barely recognisable Masanobu Ando) apparently signed up just for fun.

It is not long before the class are handed their randomly assigned kit bags and sent out into the island... and not much longer before more bodies start appearing. The film does a good job of giving a majority of the 43 students a chance to reveal their characters, albeit very briefly in some cases, and presents a wide spectrum of possible, convincing responses to the terrible situation they suddenly find themselves in...

"Could you kill your best friend?", as the tag line had us ponder upon the film's UK release.

BATTLE ROYALE's greatest accomplishment is to force the audience to truly consider how they would react in similar circumstances. It achieves this by being unflinchingly, shockingly, real in its depiction of violence and horror. The level of violence is astronomical, and it is some of the most horrific violence commited to film, because of the age of the participants and their (relative) innocence. Death comes to many in the course of the film, and it is often up close, full of frantic panic and swift horror, petering out into despair, remorse and regret. Some characters take to their situation rather more comfortably than others, but for most there is nothing but confusion, paranoia and terror... or disbelief and vain hope. Only occasionally there are moments of nobility and bravery.

Kinji Fukasaku says that his approach to the film was strongly influenced by his experiences in World War II, memories such as hiding under the dead bodies of his friends to gain some small protection from the bombs. In the 21st century, most of us in the West (and indeed in Japan) can be comfortable in the knowledge that war is something we will never have to actively confront... that it has become the domain of professionals, for whom we might give thanks and praise, but whose circumstances we rarely force ourselves to imagine in any great detail. By placing ordinary people in situations of sudden, violent, terror, BATTLE ROYALE perhaps forces us to consider things we would rather not. It was to be the last film Fukasaku made before succumbing to cancer, and is a fabulous way to end a long career. He said it was a message he wanted to leave to the younger generation... the content of that message being "Don't trust adults, and always be ready to run!". Not a terribly optimistic message, it must be said! 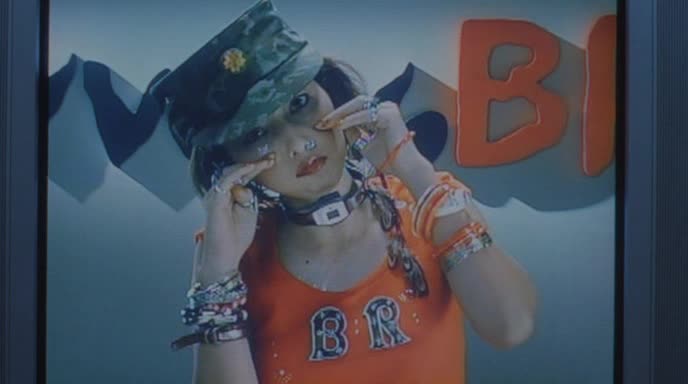 Recently, BATTLE ROYALE has entered a slightly wider public awareness in the West due to the popularity of the movie THE HUNGER GAMES, which has so many similarities to BATTLE ROYALE that it is hard to imagine there was no direct influence. BATTLE ROYALE was denied an American release for a long time, perhaps being a little too close to the bone in the era of Columbine, though it was well known amongst those who made any sort of effort to expose themselves to cinema outside Hollywood's mainstream fair. Apparently this still left a large audience who were unaware of it though, as it is hard to imagine HUNGER GAMES shallow, neutered imitation having made much of an impression (other than disappointment) on any who'd seen BATTLE ROYALE.

To be fair, BATTLE ROYALE is probably never going to make a very positive impression on mainstream audiences... the violence is too intense, too shocking, too horrific for the average moviegoer, I would assume. It is shocking even compared to brutally violent films like THE RUNNING MAN, because of the context... neither the victims or the perpetrators are testosterone fuelled killing machines who are prepared for death or murder. They do not meet their ends stoically, they do not serve death with cool one-liners... they suffer, palpably.

But it is this that makes BATTLE ROYALE such a special film... the violence is not sanitised, nor is it dehumanised. It is not presented as courageous, noble or just. It is terrible, raw and full of horrific emotion, robbed even of the justification of being for a worthwhile cause that might make the horror of a war film at least seem to have been worth enduring.

Whether Fukasaku's final message to the younger generation is truly one which needs to be heeded may be something worth questioning, but it is beyond doubt that it was a fantastic way to cap a career and a life... definitely going out with a bang. To be honest, I have not enjoyed many of Fukasaku's other films all that much, and certainly none have had the impact of BATTLE ROYALE. Outrageous in concept and remarkable in execution, BATTLE ROYALE is one of the best and most important films to have ever come out of Japan - or indeed the world!