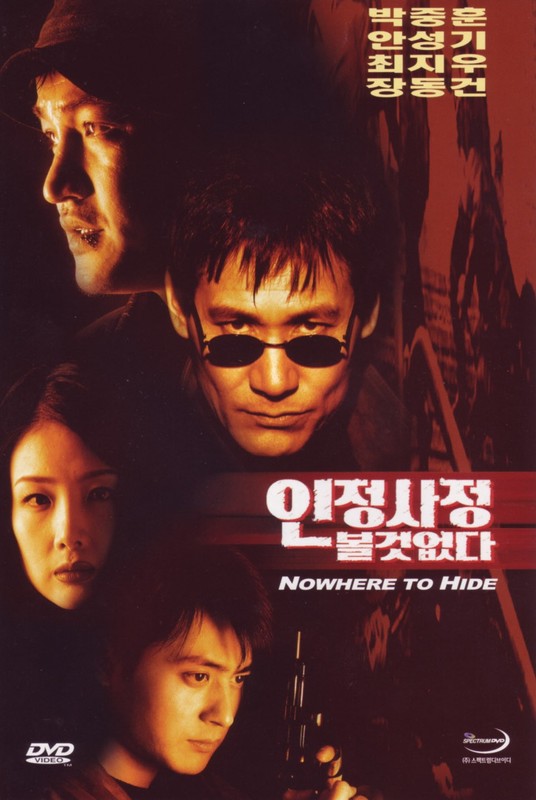 After a gangland killing, a group of cops set out to track down the killer using what seem to be the only techniques in Korean cinema cops' arsenal - long stakeouts and beating up potential suspects or witnesses.

The story is as far from original as it's possible to get, and such films are usually about either character and dialogue, action or style. In the case of NOWHERE TO HIDE, there is no question that the film is an exercise in style. Lee Myung-Se brings to bear every camera technique he can muster in the pursuit of visual stylisation, with character development and action getting a look in, but clearly placing significantly lower on his priority list than making stuff look cool.

On a long defunct message board somebody once observed that in NOWHERE TO HIDE it was often obvious that the rain (of which there is much) was generated by somebody standing behind the camera with a hosepipe, and that at least Hollywood went to the trouble of erecting large sprinkler scaffolds to create a more realistic coverage. At the time it struck me that whilst what she said was true, it wasn't right, though it took me years to formulate an appropriate response... which is that there was never a Hollywood film where rain looks as cool as it does in NOWHERE TO HIDE. Realism was clearly never the goal, so to criticise the film for not achieving it is to miss the point, which is that it does achieve exactly what it set out to do - bamboozle the viewer with style. 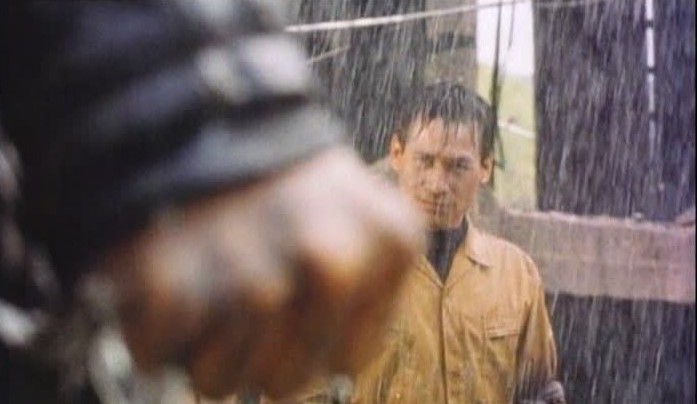 NOWHERE TO HIDE came fairly near the front of the "New Korean Wave", that period in the late 90's and early 00's when it looked like Korean Cinema was on an unstoppable roll and was going to win the hearts and minds of Asian cinema fans world-wide. It was probably amongst the first Korean films I saw, and it certainly impressed. With production values that put Hong Kong to shame and a sense of style that the territory seemed to have been struggling to capture of late, and perhaps a quirkiness and dark humour that recalled the charms of Japanese cinema, it was easy to see why the buzz was all about South Korea. Lee Myung-Se was often compared to Wong Kar-Wai at the time, thanks to his use of (and perhaps reliance on) visual demagoguery, though in Lee Myung-Se's case it seemed more apparent that the camera techniques and effects were an end in themselves rather than a tool wielded to serve a deeper purpose.

NOWHERE TO HIDE certainly impresses visually, but makes little impression otherwise - there is a sense that it is not entirely sure what message it wants to convey, or even what sort of film it wants to be. Early on there are scenes that are clearly comedic, arguably a parody of cop/killer films, but then later there is a downbeat middle section where we wonder if we are being asked to consider the sacrifices police make in the service of justice, which eventually follows a tangent into testosterone and the appreciation of hard-boiled cops who will stop at nothing to get their man.

The conclusion I reached in the end is that Lee Myung-Se did not really have any deeper ambition than to dazzle us, to make us coo at the pretty pictures (coupled to an eclectic soundtrack). If that is the case, then he certainly accomplished his goals... and definitely made rain look cooler than Hollywood with its sprinkler scaffolds ever has :-)