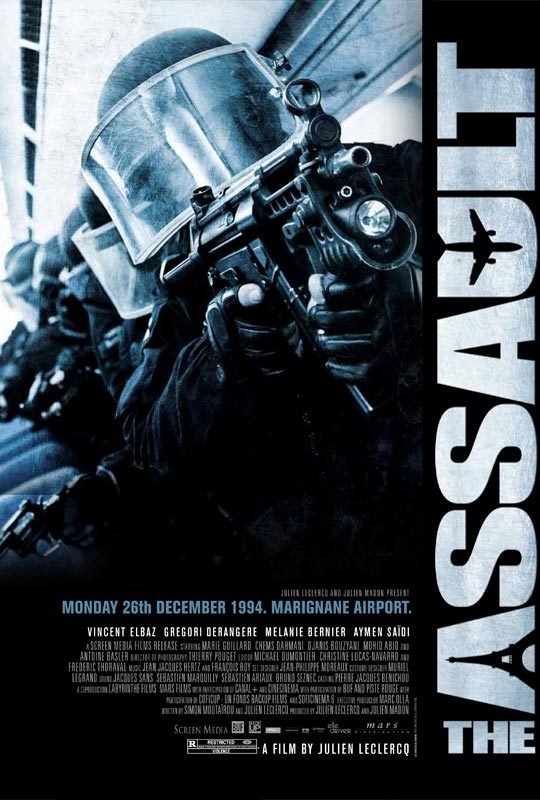 Based on a real life hijacking in 1994, when a group of Islamists from Algiers take over a plane destined for Paris, demanding the release of some prisoners in exchange for the hostages' lives. The government attempt to negotiate, but ultimately French special forces (the GIGN) storm the plane in the belief that more lives will be saved that way.

Basing yourself on real life events does somewhat constrain your options with the story, but film makers usually at least decide what angle they want to view the story from. Is it a film about the bravery and skill of the special forces, as the title L'ASSAUT and the poster/cover artwork would seem to imply? Not really - whilst they are a presence throughout the film, it is not until near the end that they actually take any action, and when they finally do it is a most unspectacular assault, showing very little in the way of superior skill or training, or indeed having much of a plan.

Is it instead a film about the incompetence of the authorities leading to tragedy? The special forces demonstrate little real skill, and their commanders little real sense (at one point snipers have a pretty clear line of sight on all four terrorists, but they decide to send a squad into the plane anyway, and before doing so the snipers inexplicably relocate to a rooftop where they can't see what's going on in the plane or offer much support). The film doesn't seem to be trying to make this point though - it never tries to draw a line between poor decisions and disastrous consequences (of which there aren't really any), or point blame at the decision makers behind them.

Various government personnel are given screen time, but if you are expecting clever plans or negotiations you'll be waiting a long time for them. It's remarkable how little is actually done for the roughly two days in which the terrorists are on board the plane. One female civil servant (her exact job is not made clear) gets one of the largest roles in the film, showing more initiative and perhaps more insight into the situation than her superiors (for whose authority she seems to have little regard), but the film does not really succeed in portraying her as the unsung hero of the hour, if that was ever its intent.

In the meantime we are shown various scenes of life on the plane under the hjackers, who are probably given as much character development as anybody else, but do not come across as particularly smart, cunning, evil, inept, misguided, complicated or even interesting. They are driven by religious fervour, believing they are doing God's work, and that's about it. A couple of passengers are singled out for a bit of screen time, but none of them come across as particularly interesting either... the vast majority of the passengers are neglected by all concerned, but are seemingly content to sit around in a plane for a couple of days without even questioning their situation, let alone doing anything about it.

So, what exactly was the angle that L'ASSAUT wanted to tackle its real life story from? I have no idea. Perhaps they just wanted to document events as accurately as possible, thereby showing that even a 2 day hijacking and hostage scenario ending in an assault by special forces can actually be pretty dull in practice. The heavily desaturated colour palette (almost to the point of monochromaticy) might be a subtle nod towards the surprisingly mundane characters and events involved - though the restless camerawork argues that this was not a deliberate intention.

I think that Julien Leclercq simply imagined that he was making a far more interesting and exciting film than he actually was... scenes such as those involving the home life of one particular GIGN member seem like they were intended to give us some emotional investment (but do not). I suspect that he just imagines his ability to tell a dramatic story to be far greater than it is.