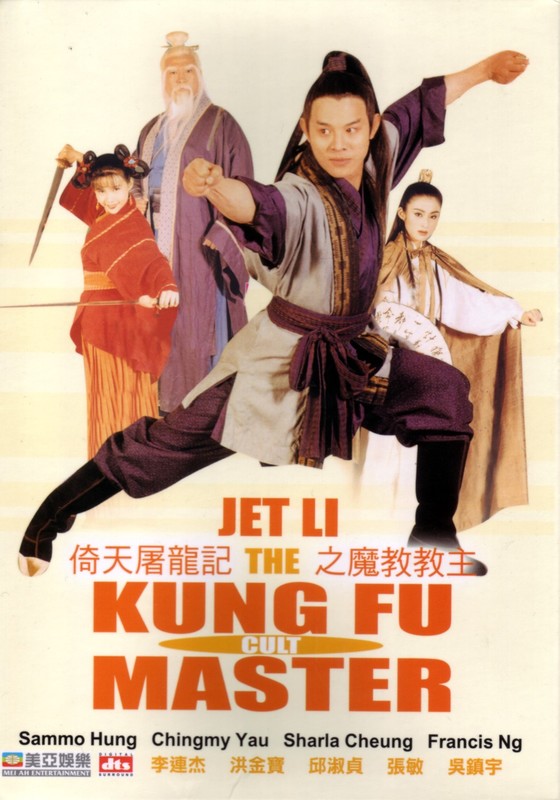 Two martial arts masters forge a pair of powerful swords, and inside them they hide scrolls with the secrets of their powerful techniques. The various clans of the martial arts world desperately want to obtain the swords and their secrets, and various alliances are formed, as conflict consumes the land. The Chinese clans form a loose allegiance against the Evil Sect from Persia, and war is waged... but the daughters of two clan leaders fall in love and go into seclusion, giving birth to a child named Mo Kei.

To celebrate his 100th birthday, the couple take Mo Kei to see his grandfather, King of Gold Lion, leader of the Evil Sect, but they are ambushed and Mo Kei is wounded by the Jinx's Palm strike. Chang San Fung intervenes and rescues them, but the other clans track them down and try to force them to reveal the location of King Of Gold Lion. To protect their friend and preserve their honour, Mo Kei's parents commit suicide, swearing Mo Kei to seek revenge. However, the Jinx's Palm strike has sapped Mo Kei's power, meaning he can never learn kung fu.

That covers about the first 10 minutes of KUNG FU CULT MASTER, and is already enough plot to fill a movie. The pace slows a little from there, but only for a while, and the remaining 100 minutes cram in a whole lot more. The film is based on Jin Yong's HEAVEN SWORD & DRAGON SABRE story, which probably tells you much of what you need to know about it... i.e there are dozens of main characters, numerous rivalries and conspiracies amongst the different clans, a profusion of magical weapons and mystical martial arts techniques, and lots of people flying around the place shouting at each other. 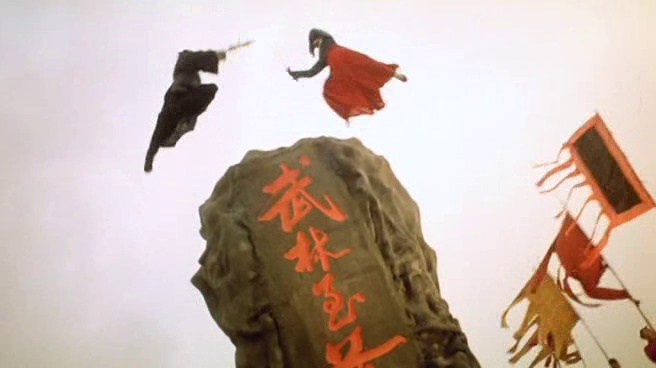 There were any number of films along these lines coming out of Hong Kong in the early 90's, but with its all-star cast and well above average budget, KUNG FU CULT MASTER certainly had ambitions to be amongst the best of them. It largely succeeded in these ambitions, but unfortunately it was a victim of timing - audiences had just about had their fill of wire-powered wu xia films when it came out, and it was a flop at the box office. The unfortunate consequence of this is that the planned second part was never made - the film ends on a cliff hanger which leaves the viewer keen for more, but there is no more to be had.

All is not entirely lost, though, as the film follows basically the same events as Part 1 of Chor Yuen's telling of the story, Heaven Sword and Dragon Sabre from 1978, for which the second part was made - so if you want to know what happens next, jump back in time 15 years and pick it up again there :-) It's not quite the same as having a proper sequel to KUNG FU CULT MASTER with the same stars and the same production values, but it's a mitigation of the frustration.

It is a real shame that KUNG FU CULT MASTER will forever remain an incomplete entity, as it was genuinely one of the best exemplars of the early 90's style of martial arts film that proliferated in the wake of Swordsman II. Jet Li was about the hottest property in town at the time, and does a good job of playing Mo Kei despite it not being the sort of character he was best at, and despite not that much demand for his physical skills in a film where most of the martial arts take place 20 feet above ground and involve the destruction of much of the surrounding scenery. He still manages to give Mo Kei a certain amount of sincerity, and use his gifts to at least make the various stances that induce the fantastical destruction a Jin Yong fighter is capable of unleashing look somewhat convincing.

There is a strong supporting cast, with Chingmy Yau having the largest role after Jet, and making it into one of her better roles. She is cute and sassy, as you would expect, but makes some effort to act for once. Wong Jing's other favourite female of the time, Cheung Man, is given two substantial roles in the film for no obvious reason except that Wong Jing seemed duty bound to send as much work her way as possible at the time (knowing Wong Jing, one might be tempted to conjecture what he got in return, other than a reasonably capable actress). Of the remaining cast, Sammo Hung and Ngai Sing are the most notable, though Richard Ng's character and performance leave a strong impression despite not getting all that much screen time. 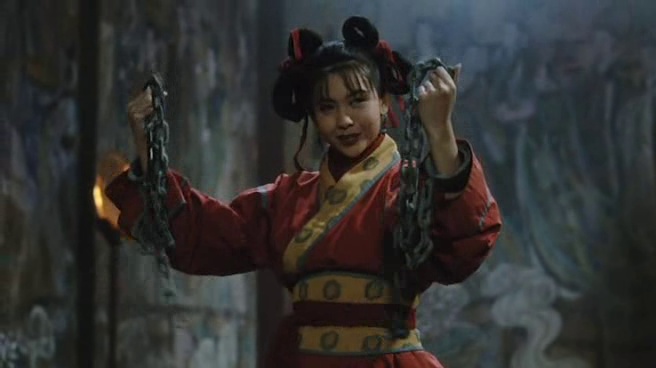 KUNG FU CULT MASTER is a great example of what made Hong Kong cinema so magical in the early 90's - the manic pacing, fantastical plotting, gleeful invention, genre mashups and of course the spectacular action. Those who like their kung fu grounded and realistic should stay far away, as this is firmly not what is on offer here. Jet Li and Ngai Sing do get a few chances to show off their power and agility (though inevitably at turbo speed thanks to some serious undercranking), but for the most part KFCM embodies the principle 'why walk when you can fly?', and the martial arts techniques used are firmly in the realm of the fantastic. Sammo Hung is normally a choreographer you'd turn to when you want something more realistic, gritty and hard-hitting, but he shows here that he can manage the techniques of fantasy wu xia as well. There are copious fight and battle scenes, featuring some imaginative and elaborate choreography and plenty of wanton destruction. It's not the best example of the style, but there is plenty that is good, and the film's budget means not too many corners have to be cut... if Sammo or Wong Jing wanted a dozen people flying through the air, they got them. Even though there is plenty of action, it isn't the main focus on the film - despite the clearly elaborate set ups for some of the scenes, the film lets them pass by without lingering unduly, focussing more on delivering the story.

Of course, when you have as much plot as KUNG FU CULT MASTER tries to squeeze in, you can't afford to waste too much time not cramming in dialogue and exposition as quickly as the cast can deliver it. Despite only being half a film, by some measures, it could just have easily have been turned into two. There are so many characters, and their relationships take so many twists and turns, that keeping track of it all is a real challenge - I think I'd probably seen it three times before I could really say I had a decent grasp of who exactly all the different characters were and how they were related. On first viewing I largely gave up trying to make any sense of it, and just marvelled at the visual ingenuity on display. Keeping track of all the different groups introduced in the first five minutes is barely necessary to making sense of what follows, as long as you are not unduly concerned about understanding exactly why people do what they do at every twist and turn of the plot. Wong Jing wisely picks a few strands of the story to get the main focus, unlike Chor Yuen, who seemed incapable of leaving any character or plot detail on the editing room floor. 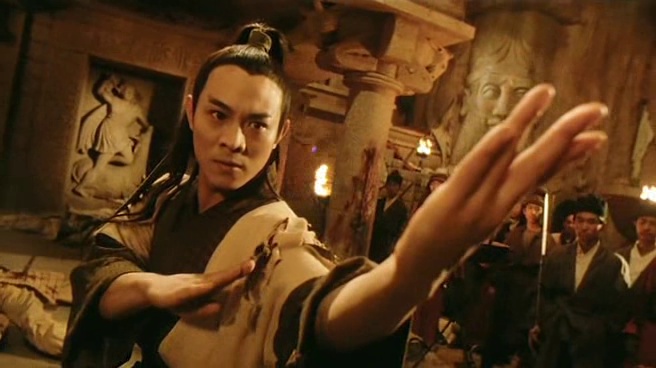 I must have seen the film 5 or 6 times now, and have grown much more familiar with the cast and the story since I first saw back in the 1990's, when I was first discovering Hong Kong cinema. Whilst being able to follow the plot is quite satisfying, my inability to do so the first time I saw it did not prevent me from enjoying and marvelling at it... piecing it all together does help to sustain interest on repeat viewings though!

I guess it's a film that can be appreciated on a couple of levels... if you're a novice to this style of film, and all the convoluted developments involving mystical martial arts skills and obscure clans of fighters goes over your head, just switch off your brain and enjoy the spectacle. If you're an afficionado, free up some short term memory capacity and try to keep track of who's who and why they're doing what they do from beginning to end :-)

Being a Wong Jing film you know you're not going to get much intellectual stimulation or a profound message... more a bunch of knob and rape jokes, really. KUNG FU CULT MASTER is certainly not a deep film, though I suppose there's a message of some sort in there... the perils of greed and ambition, perhaps... or not to assume that just because somebody is a member of The Evil Cult they're a bad person.

It's worth knowing going in to the film that it's going to leave you on a cliffhanger for which there is no resolution, to avoid the frustration of being left hanging (though much has been wrapped up by the end of the film - it's mainly new elements that are introduced at the end in anticipation of a sequel). The fact that Chor Yuen's version of the story is now available (or was - guess it's out of print again by now) ought to soften the blow a bit too, though his interpretation of the tale is a little less satisfying than Wong Jing's (arguably prettier, though). The lack of a proper sequel certainly ought not be a reason to avoid seeing this film anyway, as it is still a great piece of cinematic creativity.