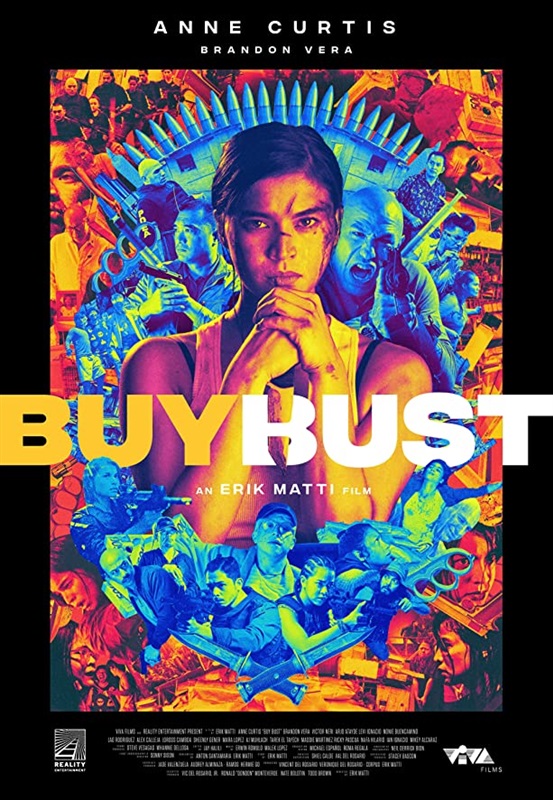 A S.W.A.T. team enter a Manila slum to bust a major drugs dealer, but the gang knows they are coming and the boss compels the slum's residents to assist in trapping the police so they can be hunted down.

Yes, it's basically The Raid: Redemption in a Manila slum, and is very clearly the Philippine's entry into the genre of raid-a-likes. The film introduces its characters quickly and efficiently, sets the stage and then lights the fuse. Violence explodes and the rest of the film is basically a hunt through the ramshackle alleys and buildings with fights that become increasingly desperate as ammo and bodies are exhausted.

Sadly the choreography and direction of the action isn't up to the standard of films like Wira and THE NIGHT COMES FOR US and it feels a bit amateur hour with little impact to the action - though there are individual shots and sequences that definitely work. In fact it seems to improve as the film goes on, as if they were learning as they went... perhaps they were, it would definitely have made sense to shoot the film in chronological order so maybe they gathered around at the end of the day to watch the rushes and work out how to make the next day's action more convincing, more brutal and more exciting.

There is one sequence in particular towards the end of the film that is really quite impressive, the now obligatory single-shot fight sequence pioneered by Tom Yum Goong, with the camera tracking Anne Curtis through and over the slum buildings as she is besieged by attackers from all directions for several minutes. The film gets a whole extra point in its rating for that shot.

Anne Curtis is pretty awesome in the film overall, tough and very physical in her fights. Apparently she wasn't a fighter before but trained for the role, and she is quite convincing. In fact she is arguably more impressive than Brandon Vera, who really is a trained martial artist and wrestler (and a clone of The Rock if I'm not mistaken?).

The film looks nice throughout, mainly thanks to some stellar lighting. The slum provides some really interesting geometry for light to filter through and bounce off, and the cinematographer does a good job of capturing it. Unfortunately the soundtrack is... less good, and there's some peculiar sound mixing, though that's another thing that seems to improve as the film goes on.

I ended up liking BUYBUST quite a lot more in the end than I did in the first hour or so, as the tension ratchets up and the action becomes more and more desperate, with hordes of attackers with makeshift weapons making it feel almost like a zombie film (I was reminded of the French film Nid De Guepes at times, which was more or less a remake of ASSAULT ON PRECINCT 13, which was inspired by Night Of The Living Dead). The ending hits kind of hard as well, in the context of Rodrigo Duterte's war on drugs.

The weak parts of the film prevent me from giving it the kind of unreserved recommendation that I would for the best films of its type, but if you can handle a bit of shonk BUYBUST does pay off eventually.