Directed by
Genre
Sleepy but restless 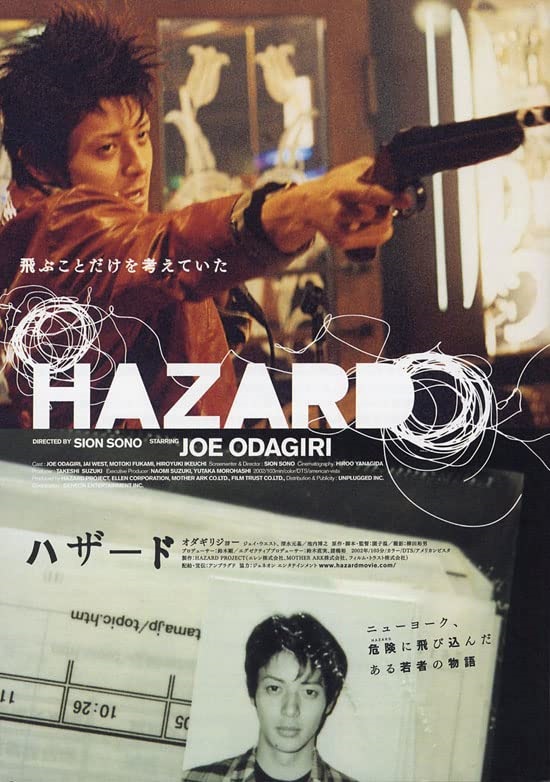 Shin finds Japan sleepy and boring, and wants some excitement his life. When he reads that New York City has the highest crime rate in the world he decides to visit, to experience some danger. Upon arrival he is promptly robbed, fittingly, but then a couple of Japanese-Americans decide to take him under their wing.

The duo (now trio) live a carefree life, selling drugs from an ice cream van and committing armed robbery when they need a little extra, so Shin definitely gets a taste of the "hazard" he was looking for.

HAZARD is filmed on location in New York, presumably guerrilla style with hand held cameras and what seems to be a lot of improvisation. It's a peculiar entry in Sion Sono's filmography, though I suppose there aren't many films of his that aren't peculiar in one way or another. Despite the dramatic poster and synopsis it's not a crime film in any familiar sense, it's more arthouse than genre cinema.

The film moves along quite swiftly but with only a vague sense of direction - there is a narrative arc but it's spread out amongst scenes of reflection and mood setting, painting a picture of its characters and of New York as they see it.

Whilst this freeform approach makes HAZARD interesting it also leads to the film's biggest problem - the acting, and especially that of Jai West. He is absolutely insufferable as he hollers and whoops and yells his lines in a mix of English, Japanese and wannabe gangsta. It comes across as completely fake, and annoying.

It's a shame, as Joe Odagiri and Motoki Fukami do a much better job. They're more down to earth and believable as characters, as is Hiroyuki Ikeuchi in his small role. When they were the only ones on screen the film was usually quite interesting and enjoyable, but every time Jai West appears it immediately falls apart and becomes irritating - and he's never off screen for very long.

Most of the smaller roles seem to have been filled by non-professional or semi-professional actors... and it shows. Whilst most aren't actively annoying they don't really inhabit their characters well, and the film feels artificial as a result.

There are some moments in HAZARD that are quite poetic - literally so in one section that's perhaps the film's best, despite being one of its quietest moments. There are parts when it's quite intriguing, and there are flashes of a film that might have been really good. This isn't it.

Improvisation was undoubtedly the film's undoing, and the scenes that look more obviously scripted and intentional are generally the best, but I find it hard to imagine what the film would have been like if it had all been written, acted and filmed in a more conventionally cinematic way. Would it have just been a generic crime film?

Sion Sono is interesting at least in part because his films are so diverse and unpredictable, and this was clearly an experiment in doing something different. I'd be curious to find out what he thinks of it himself, whether it's the film he was hoping it would be. Somebody ask him if you get the chance, yes?