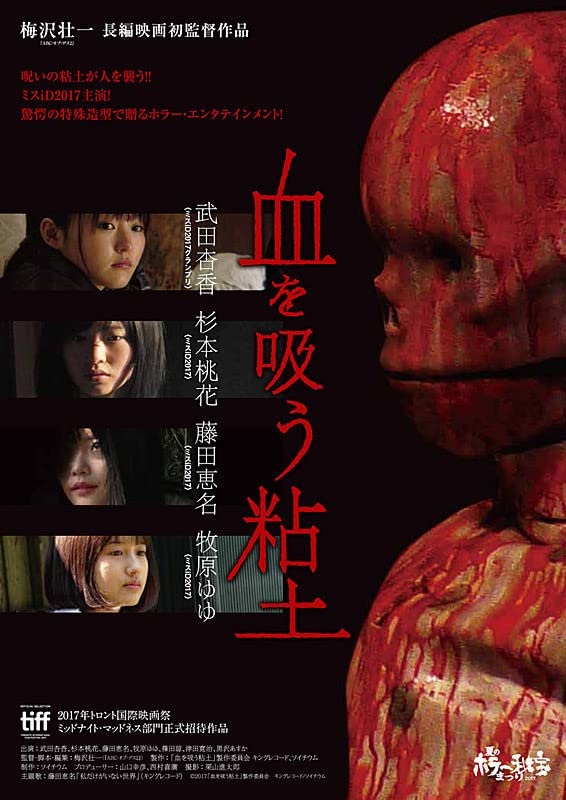 A small art school out in the country welcomes one of its students back from a semester studying in Tokyo, but her sculptures are now so obviously better than her classmates that jealousy is inevitable. She tries to pass it off as just good clay she was given to work with... and she might be right, because there's definitely something odd about that clay that was found buried in a box that was exposed by an earthquake.

I'd love to be in the meetings where Japanese indie studios come up with the ideas for their next film:

"Hey, what if there's some clay... and it drinks blood like a vampire?"
"Sounds good, here's a relatively small amount of money!"

With Yoshihiro Nishimura's name attached, if only as producer, it's impossible not to compare VAMPIRE CLAY to the output of Sushi Typhoon directors such as Nishimura and Noboru Iguchi in their heyday, and whilst it doesn't come close to the delirious madness of films like The Machine Girl or Zombie Ass: Toilet Of The Dead it does deliver the key ingredients of cute girls screaming and gruesome bloody murder. There's even quite an interesting backstory in there.

Director Sôichi Umezawa has a long history as a special effects makeup artist, though surprisingly he doesn't seem to have worked with Yoshihiro Nishimura many times before. He clearly knows what he's doing, and the malleability of the film's monster gives the makeup and modelling teams plenty to work with. How do you fight something that can take on any shape or form?

The cast aren't called upon to do a lot of what you might call "acting", but they're all as sincere in their roles as you could wish for given that it seems to have been the first gig for most of the teenage cast - and the last, in many cases.

VAMPIRE CLAY doesn't deliver gore or invention on the levels of Vampire Girl vs. Frankenstein Girl but it gets reasonably creative in dispatching its cast members. Even at 81 minutes it's probably 5 or 10 minutes longer than it strictly needed to be, but it remains watchable throughout. It's probably a stretch to call it a "good" film, but it's definitely not a bad one either.