Directed by
Genre
Don't you want to be a big strong man? 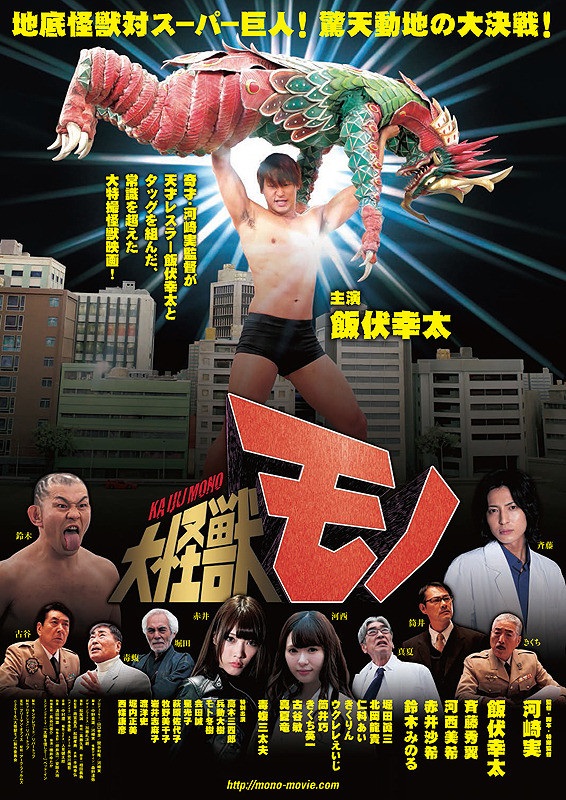 Humans have caused the Earth's environment to go out of balance, resulting in increased earth quakes and the return of species not seen for millions of years. This culminates in the appearance of a giant dinosaur-like monster, recorded in myth and legend as the kaiju Mono.

Luckily a maverick scientist shunned by his peers has just made a breakthrough in the project he has pursued for years, a serum that when injected into a human will fill them with energy and strength... and make them hundreds of metres tall. He just has to persuade his assistant to let him inject the serum into him.

Kawasaki Minoru takes a break from his usual films about anthropomorphic animals played by men in rubber suits to make a kaiju film. Wait a minute, that's not different, it's just bigger. The kaiju doesn't have a job though, so it doesn't fit into the same genre as EXECUTIVE KOALA or Crab Goalkeeper. Definitely an adjacent one though.

I like Kawasaki Minoru because his films are wilfully corny and reliably stupid, with a lack of pretension that turns things that might be considered flaws in other films into virtues. It's cheap and cheerful with a simple message, and sometimes that's just what you need in your life.

DAI KAIJU MONO actually seems to have a higher budget than some of Kawasaki's other films, though that is a pretty low bar to clear and he seems to have made sure not to use any more of it than necessary on the giant man vs giant monster fights. You can go one of two ways there - spend millions of dollars on CGI or spend a few thousand on a miniature set and a rubber suit or two. There is no in between that works, and history suggests the latter will age better.

It's hard to find fault with a film that isn't trying to be "good", so there's nothing I can really say against this one - oh, one thing, there's a couple of non-kaiju fights that are underwhelming, it might have been worth putting a bit more effort into those. And we should definitely have seen Kota Ibushi's ass at least once.

It's a simple tale painted in broad strokes, and a giant man fights a giant monster. In Tokyo. What more do you want?