Directed by
7/10 - More even-keeled than its predecessors 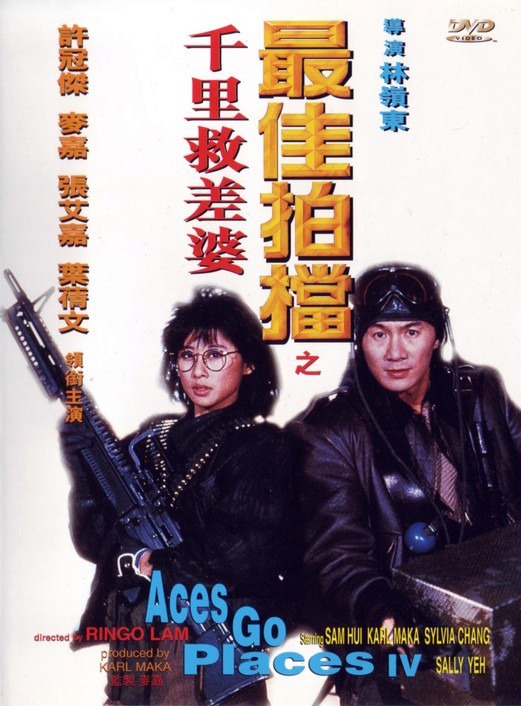 King Kong volunteers to be the guinea pig for a magic crystal - sorry, hi-tech prism - which uses hypnosis to transform a man into a superman. It doesn't work, but the bad guys don't know that when they burst in and try to take it. King Kong manages to escape with the prism and Sally Yeh, the daughter of the scientist that created it. The bad guys follow them to Hong Kong and take his best friend Baldy's wife hostage, demanding that they bring the prism to New Zealand to exchange for her.

No, the plot doesn't make a lot of sense, but that's never been a major concern for the Aces Go Places films, and overall this is actually one of their more coherent plots.

ACES GO PLACES IV brings in a new director for the series, Ringo Lam. This was actually quite an early gig for him, before City On Fire, Prison On Fire, SCHOOL ON FIRE etc. made him a celebrated name. It seems like he'd only directed a few romantic comedies prior to this, so it's not clear why Cinema City decided to entrust him with one of their most successful franchises - perhaps he had some TV work that was more indicative of his ability to handle a big budget action film?

Regardless, the choice proved to be a wise one as part 4 is a significant improvement over Aces Go Places III. The gadgets that were one of the distinguishing features of the series are gone in this film, but we get probably the best action of the series so far in their place, which is not a bad trade. At least some of the credit for this should go to New Zealand wrestler Onno Boelee, who proves surprisingly game for getting thrown around for somebody his size.

One of the series' better features is Sam Hui doing his own stunts (for the most part). Quite often a stunt is filmed with a close-in camera and you think "stuntman", but then it pulls back and you see it is really Sam. That continues to be the case here, and seemingly not to be outdone, Karl Maka and Cyrus Wong are both very visible in some insanely dangerous-looking stunts - particularly impressive when you consider that Cyrus Wong was THREE YEARS OLD at the time. I bet he's never been above the 2nd floor of a building since.

Unfortunately Sylvia Chang is relegated to "guest starring" in this film, though it's more than just a token appearance even if it is only two scenes - one is the entire finale. To compensate for the Sylvia Chang reduction we get Sally Yeh in full-on goofball mode, being quite adorable.

A recurring gag in the film has Kwan Tak-Hing and Shek Kin as the heads of rival police forces and ice hockey teams, playing on their long running rivalry in the Wong Fei-Hung films, which is sweet.

ACES GO PLACES IV is perhaps the least stupid film in the series, with less mo lei tau and more situational comedy. It has less laugh out loud moments than Aces Go Places II, but it's more even keeled than any of its predecessors. It's one of the more successful entries in the series, and has aged fairly well.

Only Aces Go Places V to go now - actually the only one I haven't seen before, though I saw the others so long ago I might as well not have as far as my memory is concerned.