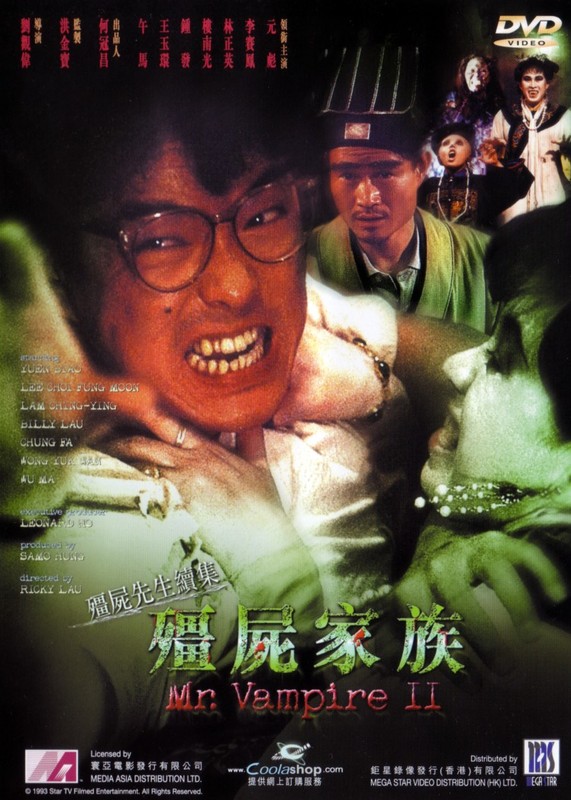 A group of body snatchers come across a Qing Dynasty tomb in a cave, where a whole family have been interred. They note that the bodies are unusually well preserved, and conclude that this means they will fetch a good price. They take them back to their headquarters... failing to appreciate the signficance of the talismans attached to the corpses until it's too late.

The corpses come back to life (you knew that from the title of the film, right?), and the young boy gyonsi gets separated from his dead parents, hiding out in the greenhouse of Wu Fung's family - where his daughter naturally mistakes him for an illegal immigrant. Then it all gets very E.T. for a while, before finally Mr. Vampire himself, Lam Ching-Ying, gets involved and things proceed slightly more as we had been expecting them to.

The gyonsi genre is pretty simple... you take some hopping vampires, season with a blend of comedy and action, and basically let it play out. It's quite hard to get wrong, which is probably why there are so many films which follow the formula. The original Mr. Vampire is of course the film that defined the genre, but the first sequel is definitely a misstep. There's really only one way to blow the formula: try to give your vampires a personality. I suppose we can give MR. VAMPIRE II a little leeway for having been the first film to commit this error... but just a little.

One thing your Gyonsi film definitely does not need is a cute vampire kid (zombie foetuses are of course fine in any film). It may have been the eighties, and everybody was still glowing warmly at the memory of E.T., but trying to apply the same formula to hopping vampires was just a bad idea. A huge portion of the film is basically blown on scenes of Wu Fung's kids having a great time with their new undead buddy and his magical powers. Please! Even the parents end up having personalities forced upon them... sorry, but if your marital strife hasn't been resolved by the time you're dead then it's time to move on. Vampires, especially hopping ones, should be alien and mysterious, an implacable foe driven purely by bloodlust. When you're working harder at generating sympathy for the vampires than the humans, it's time to rethink your script. 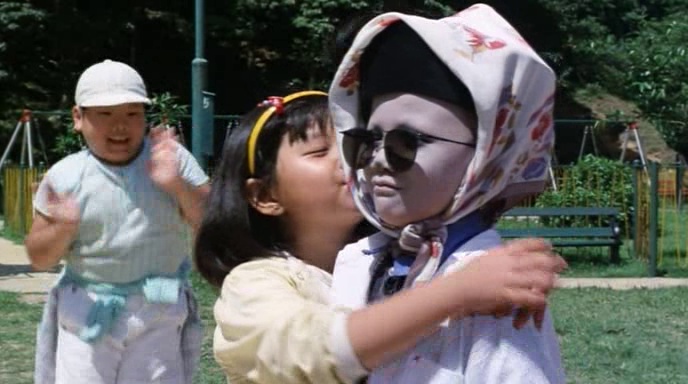 As with the original, MR. VAMPIRE II is a bit of a genre mashup, dwelling mainly on comedy so that sometimes it feels like a bit of a sketch show. Unfortunately, much of the comedy is delegated to Billy Lau... possibly in the mistaken impression that he isn't incredibly annoying. Also annoying is the fact that Lam Ching-Ying doesn't even show up until 40 minutes into the film - though Chung Faat's presence before then is a small consolation. Upgrading Chin Siu-Ho to Yuen Biao was probably a good idea though.

The film makes some other nasty mistakes... the 'Retardant Gas' scene is hilarious for about a minute, but unfortunately it goes on for at least a million years (or seems to). Too much of a good thing is sometimes an even better thing, but in most cases it is not, and in this case it is most assuredly a bad thing - ruining what should have been the best part of the film by dragging it on until it has made us thoroughly sick of it.

In the end, the best part of the film is when James Tien asks Lam Ching-Ying what qualifications he has for tackling the vampires, and he reels off a list of his relevant movie appearances. A good gag that isn't drawn out until it ceases to be funny. The action scenes liven things up at times too, though there's a distinct shortness of the cool Taoist rituals that are supposed to be a mainstay of the genre.