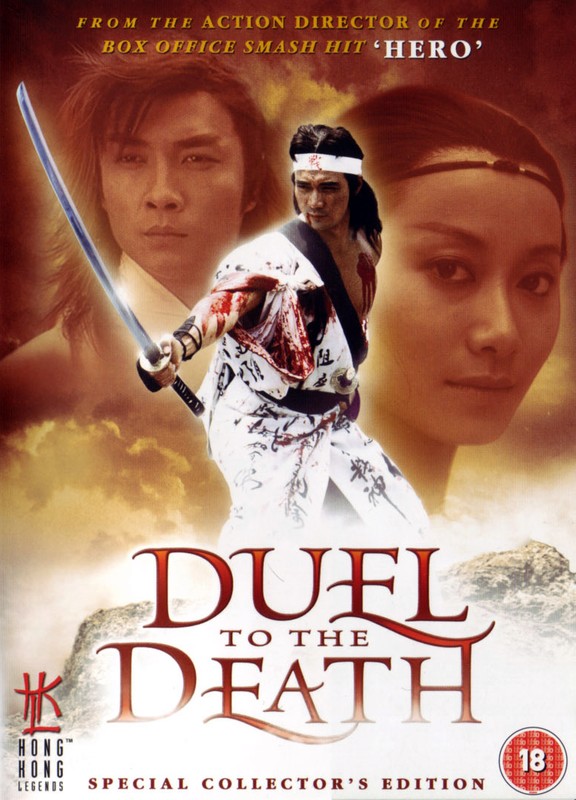 Every 10 years a duel is held between the top Chinese swordsman and the top Japanese swordsman, to see which country has the best martial arts. Lord Of Swords (Damian Lau) has been training at Shaolin Temple for 10 years for his chance to fight, whilst Hashimoto (Norman Tsui) has been training for just as long in Japan. The date of the duel approaches, and both swordsmen converge on the House Of Swords, traditional location for the duel. But forces in the background on both sides have deeper ambitions, and a fair duel does not necessarily feature in their plans.

Tsui Hark's The Butterfly Murders and Patrick Tam's The Sword are usually credited as being the first of the "new wave" of martial arts films (with Johnnie To's The Enigmatic Case generally being forgotten, for some reason), but it was with Ching Siu-Tung's DUEL TO THE DEATH that there was no doubt a new wave had arrived. The introduction of more modern visual language to the martial arts film and the realisation of a highly innovative style of wire-based action choreography showed a clear departure from the films that came before it such as those produced by Shaw Brothers. There was a brief flourishing of the style in its wake, with Shaw Brothers responding with films such as Holy Flame Of The Martial World and Bastard Swordsman, and Tsui Hark countering with the remarkable Zu: Warriors Of The Magic Mountain, but they were fighting a losing battle against audiences whose interests were shifting towards modern day action films, with Sammo Hung and Jackie Chan leading the charge in that direction. There were a few more attempts at producing period films in this style in the eighties, with Ching Siu-Tung continuing to fly the flag (and much of the cast) with the A Chinese Ghost Story series, but it wasn't until the early 90's that audiences were really ready for period films again, and the "second new wave" of martial arts films (which was really a continuation of the first) exploded in the wake of Once Upon A Time In China and Swordsman.

Like other films of the new wave, DUEL TO THE DEATH eschews the comedy stylings that were popular at the time they were made, in favour of a quite dark and cynical tone. In early scenes the film seems to draw sides, with the Chinese martial artists and monks preaching the virtues of martial arts for health and for justice, whilst the Japanese forces believe victory is paramount and the important thing is to crush your opponent. As the film progresses, though, things become less clearly defined, and Hashimoto's observation that there are scum from both countries seems to be the only conclusion to draw.

There is a certain element of tragedy and fatalism in the story of the duel, with both characters having cause to question this goal that they have dedicated so much of their lives preparing for, as they realise that they are both being used by less principled agencies but are unsure whether they can choose a different destiny now that events have been set in motion. When you have trained to achieve the supreme level of martial arts ability, is a duel to the death the inevitable end result?

Ching Siu-Tung is credited as director on some of the finest films Hong Kong has produced (A CHINESE GHOST STORY, Swordsman II), but then he has directed some utter drivel as well (Wonder Seven, anybody?). It has led some reviewers such as myself to speculate whether the guiding hand behind Ching Siu-Tung's classics was really producer Tsui Hark, as without somebody with a strong vision working alongside him, Ching's focus does seem to be rather scattershot, and his ability to tell a coherent story sometimes questionable. DUEL TO THE DEATH is the enigma that makes this conclusion seem much less than inevitable though, as it shows an incredible purity of focus and of vision with Tsui Hark nowhere in sight. For his first film, at least, Ching seems to have known exactly what he wanted to achieve and exactly how to deliver it.

Ching's status as a visionary action choreographer and visual stylist is never called into question, and for good reason. His distinctive visual style is not quite fully developed in DUEL TO THE DEATH, but his fantastical vision of martial arts choreography bursts into existence fully formed here. The film was a clear pioneer in the use of wirework and of rapid editing and camera movements to create a more impressionistic style of martial arts action than had been seen before (except perhaps in the films of King Hu). DUEL TO THE DEATH is packed full of innovative and truly spectacular action scenes, and has hands down the coolest ninjas ever commited to celluloid. The sneak attacks of the ninjas are fearsomely imaginative, whilst the swordplay duels are startlingly quick, clever and brutal.

Cinematography is of a very high standard throughout, with some shots that are just achingly beautiful, and an effective use of camera placement, mise-en-scene and light and shade as techniques to enhance the telling of the story and the revelation of character. It sounded a clear death knell for the Shaw Brothers studio, whose productions were becoming increasingly studio bound and lacking in relevance as Hong Kong cinema moved into the eighties and they failed to keep up. Some of Ching Siu-Tung's distinctive techniques such as heavy filters, fisheye lenses and cameras tracking along the ground are not really to be found in this film, but it is still clear that he has put a lot of thought and care into every shot, and some shots are just astonishing.

Norman Tsui gets one of his best roles in the film (he makes the interesting observation that directors always cast him as the hero in period films and the villain in modern day films, which seems to be true), and Damian Lau certainly gets his most memorable film role too (though I think he was always more of a TV star). Eddie Ko is great as the leader of the Japanese ninjas, and Flora Cheung makes a particularly strong impression as the daughter of the House Of Swords. In an interview on the DVD from Hong Kong Legends she notes that she fell in love with making period martial arts films after DUEL TO THE DEATH, but according to HKMDB it was her last movie credit?).

A strong story, good performances and striking visuals would be enough to make DUEL TO THE DEATH a solid entry in the martial arts genre, but it is the action choreography that truly elevates it to classic status. Ching Siu-Tung's whole approach to choreographing fight scenes was totally fresh, and the techniques he innovated here would (eventually) be adopted by the entire industry. There are still some scenes in DUEL TO THE DEATH that are without comparison though - the giant ninja being particularly remarkable (I still can't tell how some of the shots were done!).

Whilst his timing was perhaps unfortunate, as Sammo Hung and Jackie Chan were busy innovating a completely different style of action choreography that would dominate the 1980's, he was certainly vindicated when the 1990's came around and everybody was striving to create the kind of fantastical martial arts sequences that he had pioneered here (and his services as choreographer were suddenly very much in demand).

If not for Ching Siu-Tung's unique vision I would probably never have been drawn to Hong Kong cinema, as it was the style he developed which really blew my mind and made me a devoted follower. I suppose this website owes its very existence to DUEL TO THE DEATH, in some ways! Ching Siu-Tung, I owe you a beer :-)