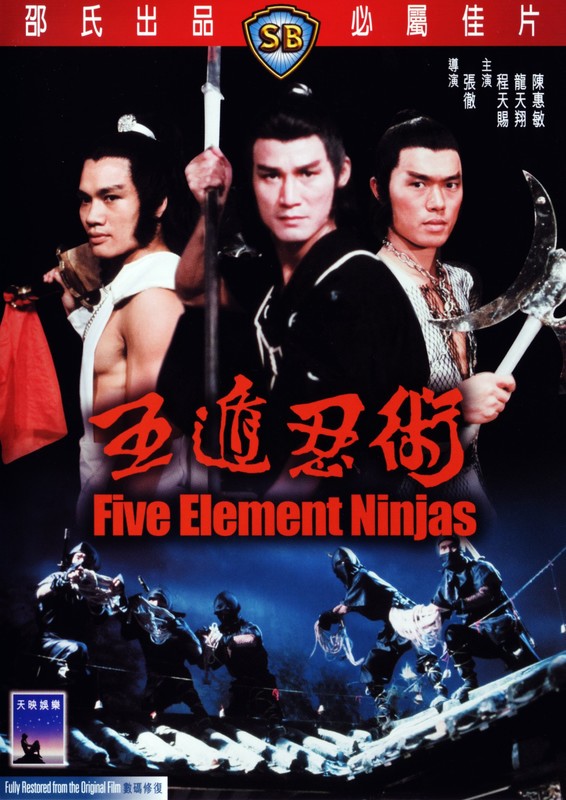 A challenge from the ninja duly arrives, announcing that they will be attacked by the Five Elements style of ninjitsu. The sneaky underhand tricks of the ninja prove far too much for the noble, trusting Chinese fighters and the righteous school is decimated. One of the surviving students must learn the ancient Chinese kung fu from which Ninjitsu is allegedly derived in order to take revenge.

FIVE ELEMENT NINJAS has some interesting ideas, but is let down by uninspired implementation. By 1982 it did seem a bit like Chang Cheh had stopped caring, certainly stopped making an effort. After directing something like 100 movies for Shaw Brothers in the previous 15 years I suppose you can hardly blame him for no longer being an innovator at the cutting edge, but as Golden Harvest and various independent studios were busy forging the new wave of martial arts films, Chang Cheh seemed to be retreating further and further into his shell (in Chang Cheh's case his shell was the studio... I don't think there's a single outside shot in this film). Where once Chang Cheh was known for his dramatic scripts and innovative filming methods, FIVE ELEMENT NINJAS has an absolutely paper thin script and suprisingly static and dull camera placement and framing. It's hard to believe that it was contemporaneous with Duel To The Death, a ninja film that feels like it comes from an entirely different era of cinema.

Before the Shaw Brothers films received home video releases en masse, FIVE ELEMENT NINJAS was one of the few Shaw Brothers films that had been reasonably widely seen by Western audiences, and it had a good reputation. This was largely due to the ideas in the film, and especially the shameless violence and gore. In Chang Cheh's world gore was pretty much synonymous with red paint though, and it is really more the idea of what's happening on screen that is gory, as the implementation is so tame and fake. Fans would speak in gleeful tones of a fighter tripping up on his own intestines, but in practice you really aren't sure he hasn't just tripped up on a strip of cloth coated in red paint - since that's what it looks like he's doing.

Perhaps it was easier to forgive the film's low budget, low tech feel when the only way to see it was on dubious quality bootlegs, and the film suffers from being presented on a remastered DVD which makes the cheapness of the sets and special effects all too clear. This doesn't really excuse Chang Cheh for not putting more effort into the film though, since he presumably didn't have dodgy bootleg VHS tapes in mind as the primary means of distribution.

There still seems to be a certain fondness for the film amongst fans, but I think the only way to appreciate it is to treat it as a source of unintentional amusement - to laugh at the cheapness, the cheesiness and the shallowness of it all... whilst perhaps taking a moment to acknowledge the creativity of some of the ideas behind it. It's probably a good film for a "midnight movie" session with an audience in high spirits, who aren't going to let the lack of quality in the execution bother them too much.