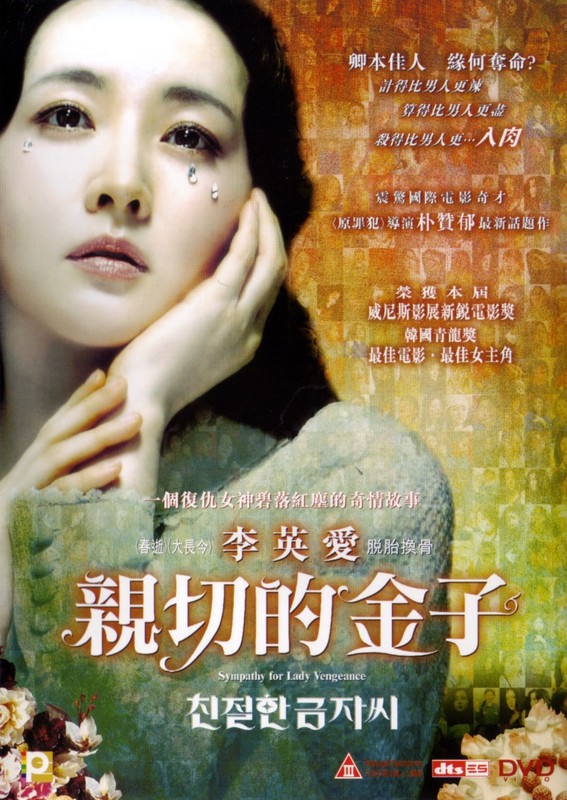 Geum-Ja is sent to prison for 13.5 years for murdering a young boy, a crime to which she freely confesses. In the prison she develops a reputation for a kind heart and angelic face, and on her release a Christian group convinced of her redemption are ready to take her in. She tells them she is not interested, however, and it is soon revealed that her good behaviour was entirely an act. In fact she has spent her time in prison plotting revenge. Despite her confession, she was not in fact the killer... her own daughter was being held hostage to force her to take the rap.

Once outside she reunites with allies she made in prison that owe her a favour, and sets out to track down the real killer. Once he is found, she learns there were further victims whilst she was in jail, and assembles the parents of the dead children to hold a kangaroo court and decide whether he should be allowed the justice of the law or a more immediate, personal justice.

The first time I watched SYMPATHY FOR LADY VENGEANCE I was a bit baffled, as it was not at all what I was expecting following Sympathy For Mr. Vengeance and OLDBOY. The first hour is entirely different in style to those films, being rather quirky, surreal and filled with slapstick and occasional farce - despite the subject matter being clearly quite dark. The tone changes dramatically for the second half of the film, though, as it drags the viewer through the lead up to, meting out of and the aftermath of Geum-Ja's vengeance.

Where the first half of the film is whimsical, and filled with seemingly incongruous stylisation, the denoument of the film is unflinchingly raw, as Geum-Ja confronts her past and the assembled parents debate what they should do, and then execute their decision. Their revenge is not sweet, and what satisfaction it brings is of a grim sort. It most certainly is not going to bring their lost children back.

Whilst Fritz Lang shocks the viewer in 'M' by giving his child killer the chance to plead his defence - never asking for forgiveness but (arguably worse) challenging his self-appointed judge and jury to at least understand him, Park Chan-Wook focusses more on the effect that judgment has on those who must make it. Offered the chance to justify or at least explain his crimes, Choi Min-Sik offers only "maam, nobody's perfect", which would seem to make the decision almost too easy - though the assembled parents still realise that they will have to live with their decision for the rest of their lives, whatever they decide.

As the third part of Park Chan-Wook's loose "Vengeance Trilogy" it is no surprise that vengeance does not turn out to have the cathartic, redemptive or transformative qualities that it might bring in a Chuck Norris movie, but it seems more ambivalent than either SFMV or OLDBOY in asserting that revenge is at best futile and at worst self-destructive. Geum-Ja's quest for vengeance is arguably a lot more productive, and perhaps even necessary.

Park Chan-Wook's status as a cinematic auteur is in no doubt, but in the first half of the film the displays of virtuosity do verge on the gratuitous at times, creating a somewhat surreal and fantastical atmosphere that serves to detach the viewer from the world depicted - essentially continuously nudging you and whispering "You're watching a film!" in your ear. On first viewing I found this more off-putting than I did on a repeat view, since I was expecting it the second time around. The intention may have been to keep the tone light and deceptively non-serious in order to soften up the viewer for the infinitely more visceral second half. It certainly had that effect on me first time around, and whilst it meant that the first half the film was much less enjoyable than I was hoping, the second half did genuinely shock and impress me. On a repeat viewing I enjoyed the beginning of the film a lot more, but the end had much less impact.

The unevenness of the tone, whether it was a deliberate device or not, certainly means that SYMPATHY FOR LADY VENGEANCE is the least unqualified success of the Vengeance trilogy, and I'm sure it disappointed many after the flawless brilliance of OLDBOY. There is still a lot to like in the film though, and it provides further evidence that Park Chan-Wook is a prodiguous talent, and one of the most interesting voices in Asian cinema in the 21st century.