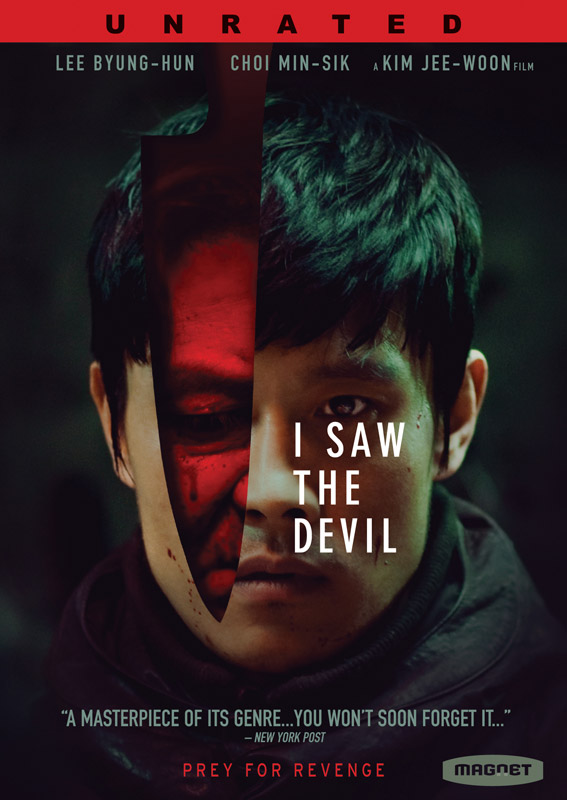 A serial killer takes a woman from a broken down car and butchers her, not realising that her father is a former chief of police and her fiance is a secret agent. The fiance vows to track down the killer, and to make sure that he suffers at least as much pain as she did.

How to tell if you've got the next OLDBOY on your hands?

1. Is it a Korean film about revenge? Check!
2. Does it contain unflinching, graphic violence? Check!
3. Does it star Choi Min-Sik? Check!
4. Is it a virtuoso display of cinematic talent? Ummm...
5. Is it intelligently written and genuinely thought provoking? Ahhh...
6. Is it, basically, any good? Well...

Given that the first three were trick questions, we can safely conclude that Magnolia pictures have not discovered the next OLDBOY with I SAW THE DEVIL. What they've found instead is a pretty standard serial killer-cum-revenge film whose only really distinguishing feature is the level of graphic violence on display, which is really not that much of a distinguishing feature any more, is it? One of the first Korean films I ever saw was Tell Me Something, a serial killer film which shocked with the level of graphic violence on display... and at the time it certainly made an impression. That was a long time and a lot of Korean films ago though, and I doubt that TELL ME SOMETHING would make much of an impression if I were to rewatch it now. I SAW THE DEVIL undoubtedly ups the violence and gore, but it fails to put it in a context of genuinely interesting ideas, so it's really less like OLDBOY than, e.g., a trip to the butcher's shop. 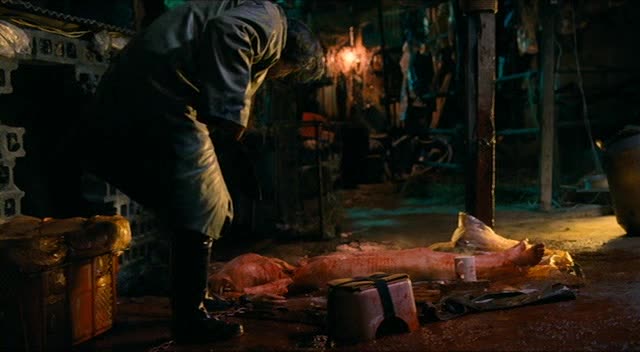 There is a certain perception in some quarters that Asian cinema fans are 'Extreme cinema fans', and that we enjoy Asian films because they are generally more extreme than their Hollywood brethren. I think there is some validity to this point of view, and in general I am drawn to the extremes of cinema - though a film can be extreme in many different ways, and it does not always equate to graphic violence. There are some films which are extremely beautiful, extremely tranquil, extremely thoughtful... and these films are often just as interesting to me as films which are extremely violent.

In general I like there to be a point to my violence... even if the point is just to be extremely violent. That's surely been done already though, with films like Ichi The Killer, Versus and The Machine Girl being so ridiculously over-the-top there's not much more you can do with gore. Some critics dismissed OLDBOY as a cheap attempt to shock with violence, but most had the sense to realise that what was truly shocking about OLDBOY was the ideas, and the graphic imagery was an inextricable part of their delivery.

I SAW THE DEVIL contains no shocking ideas, and without them the gore is really just a cheap attempt to shock... but unlike a film such as Tokyo Gore Police the film takes itself far too seriously to simply revel in the gore and be hilariously funny about it. Without taking a tongue in cheek approach to its butchery, it is just explicit unpleasantness for the sake of it. It's exactly the sort of pointless nastiness that our detractors think is all we Asian/Extreme cinema fans are looking for.

I suppose I can only speak for myself, and apparently I'm at odds with a majority of IMDB members, given the film's currently high score there, but I SAW THE DEVIL is not what I am looking for in my Asian cinema, at least. At its best, Asian cinema often is 'extreme' and it often is shocking... but those are never the only or the main reasons for it being good. Great films need to be genuinely thought provoking and challenging, or genuinely creative, absurd or just hilariously entertaining. I SAW THE DEVIL achieves none of these things... even the set piece scenes of brutality are mostly just copies of scenes that have been seen in other films (I saw bits of ICHI THE KILLER, OLDBOY, IRREVERSIBLE and I forget what else in there). It's technically accomplished but has no creativity or originality, and a complete dearth of ideas of its own.

It worries me to think that people might watch Battle Royale or Sympathy For Mr. Vengeance and see nothing more to the film than an exercise in how late the camera can turn away when something horrific is being done to a human being... to see no distinction between them and a film like I SAW THE DEVIL. The film-makers and distributors do us all a disservice by providing fuel for such misconceptions of Asian cinema and its fans... we should demand better!