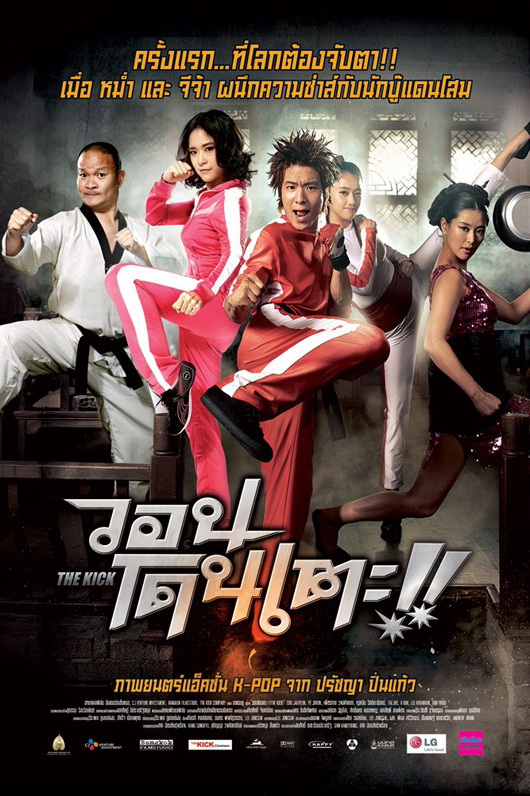 A group of ruthless Korean thieves steal a priceless Thai national treasure from a museum in Bangkok. A Korean family who happen to be in the right place at the right time manage to foil the robbery with their Tae Kwon Do skills. The thieves do not take too kindly to the family spoiling their plans.

If it takes more than three sentences to explain the plot of a Prachya Pinkaew film, you're probably trying too hard. His films tend to be high concept crowd pleasers, popcorn fodder that promises little more than to put a smile on your face, but can be relied upon to deliver one. Films like Ong Bak, CHOCOLATE and THE KICK all have plots that would work perfectly well in video games, because they serve much the same purpose in his films... a bit of light relief that ties the action together.

THE KICK is a Thai/South Korean co-production, filmed in Thailand with a mostly Thai crew but a mostly Korean cast. It could be considered something of a cinematic goodwill ambassador for both countries, presenting a little of the culture of each for the benefit of audiences in the other.

Prachya Pinkaew brings along his regular action director Panna Rittikrai for the action scenes, along with JeeJa Yanin to add a Muay Thai presence and Petchtai Wongkamlao for the comic relief. Action scenes mostly focus on Taekwondo and hence on kicking skills, a focus which gives the film its title. Pinkaew always starts his films off with fairly light action scenes that build in intensity and complexity towards a climax, though in THE KICK things never quite reach the levels of jaw dropping stuntwork that make his fully home-grown products so satisfying.

The cast all acquit themselves well in both dramatic and combat scenes, with young actor Na Tae-joo having the best role and showing off great athletic ability and a good sense of comedy, and Kim Kyung-suk of Taekwondo performance group K-Tigers showing plenty of potential too. JeeJa seems to be holding back a bit, perhaps recognising that her role is only supposed to be a supporting one.

As usual, Pinkaew finds some interesting locations to stage his action scenes, with the Bangkok Zoo offering plenty of opportunities for creative choreography - though Panna Rittikrai perhaps doesn't use the environment to its full potential. The mix of Thai and Korean styles does give the action in the film a distinctive flavour, and Taejoo's ambitions as a K-Pop dancer lead to a novel fighting style and probably the film's best fight scene.

THE KICK is wilfully populist and consequently lightweight, but it's slick and entertaining fun that audiences in its target countries and elsewhere should have no trouble enjoying.