Directed by
Genre
Too adult for kids, too childish for adults? 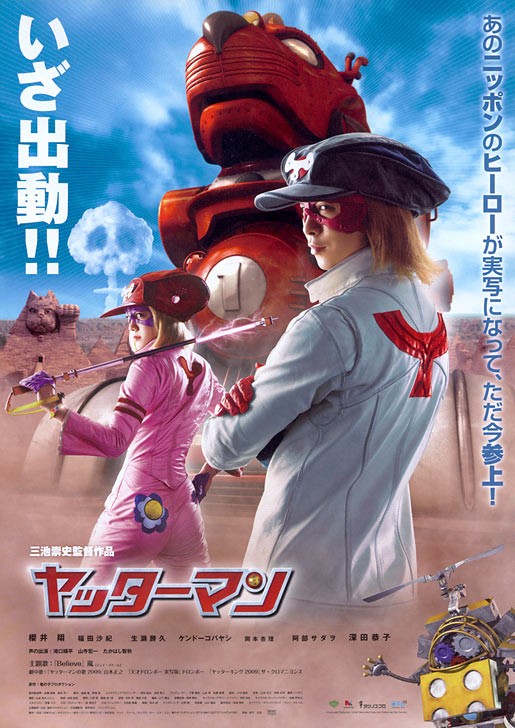 YATTERMAN is a live action adaptation of an anime series from the late 1970's directed by Takashi Miike. It tells of the ongoing struggles between our heroes Yatterman #1 and #2 and their nemesis The Doronbo Gang, as they try to keep the pieces of a magical artefact called the Skull Stone out of each other's hands.

Takashi Miike has never liked to be constrained to a single genre, despite some critics wishing to dismiss him as a one trick pony. YATTERMAN is as far a cry from his gangster films or horror-ish films as it's possible to get, though it fits in with The Great Yokai War or Zebraman. It's closer kin still to Hideaki Anno's live action version of Cutie Honey, being a piece of high camp and great silliness that might pass as a children's movie if not for some mild sexual content. It gets a 15 rating in the UK, though subtitled films always get a higher rating here than English language films (especially if they're Asian films, it seems).

The film is quite ridiculous from the very beginning, with bizarre costumes and cartoonish CGI coupled with a lot of playing to the camera and general mugging. Although clearly intended as a general joke, and never in any danger of anybody taking it seriously, there's a little too much nudging and winking at the audience. It would probably work best as a midnight movie at a film festival, with an actual audience there to get into the spirit of things - it doesn't work as well when watched from the solitude of my sofa. It would probably work best of all for an audience familiar with the original anime, as there are clearly a lot of references to it in the film.

It's hard to say whether it's a film that would really work for the young audiences that the original cartoon was aimed at... the sexual content is a little bit too overt for me to recommend it to anybody younger than mid teens (especially not if they're watching it with their parents around... nothing guaranteed to make a young teen squirm than a giant mecha firing "titty machine guns" whilst their parents look on!). I think it's more likely that the aim was to capture original fans from the 1970's who are now grown up a bit (ok, a lot!) and want something which feeds their nostalgia for youth without reminding them how easily entertained they were as kids. If that's the case, it probably should have gone a bit further than it does, and left some of the afternoon children's tv style acting and mugging to the camera on the cutting room floor.

The film is largely filmed on blue screen, in a visual style that never seeks to look realistic or expensive - cheap and cheerful is the order of the day.

CUTIE HONEY was probably more successful as an homage cum send-up of silly comic book camp because it was less ambiguous about being aimed at adults who wanted to play at being kids for an hour or two... and had a more tangible sense of nostalgic affection for its source material. ZEBRAMAN was a far more engrossing take on nostalgia for a TV superhero, incorporating the importance of rosy-tinted childhood memories to add some colour to the disappointment of adult life as a central theme and plot point. In making YATTERMAN, Miike seems to have forgotten that those colourful childhood memories lose a lot of their lustre if they're examined too close up, though.