The Heavenly Mountain sect rules the martial arts world thanks to its mystical techniques which grant near-immortal powers. Siu Yiu-Tze, the leader of the sect, has three juniors - Mo Han-Wan (Gong Li) and the twin sisters Li Chou-Shui and Li Chong-Hoi (Brigitte Lin). Li Chong-Hoi and Li Chou-Shui both fall in love with Siu Yiu-Tze but he loves only Li Chong-Hoi, and retires into seclusion with her after being wounded by the traitorous Ting Chun-Chou, who wants to acquire the sect's mystical powers. Mo Han-Wan also loves Li Chong-Hoi, so it's something a bit more complicated than a love triangle.

That's the backstory to the film anyway... trying to summarise the whole plot would probably require transcribing the entire subtitles... actually quite a lot more than that, since the subtitles are really not an adequate explanation for what is going on most of the time. It's another one of those Jin Yong adaptations where everything but the kitchen sink has been thrown in, and there is barely a second that goes by when cast members aren't pontificating about various complicated betrayals and allegiances, mystical kung fu powers or something equally incomprehensible. The only other thing you need to know, really, is that Cheung Man also has her eye on gaining immortal kung fu, and a Shaolin monk reluctantly gets mixed up in the whole complicated business.

MAIDENS OF HEAVENLY MOUNTAIN goes by quite a few names, and was a relative latecomer in the early 90's wu xia boom when incomprehensible plots involving flying characters with magical kung fu powers that make the scenery explode were all the rage. It is cut from the same cloth as the mind-boggling Swordsman II and Kung Fu Cult Master. It must have had a pretty decent budget, as the visuals are splendidly opulent, with lots of huge fantastical sets filled with smoke and rippling silk, and three of the biggest actresses of the day in the lead roles. Director Andy Chin was certainly not a big name, but has worn many hats in his career - writer, director, producer, art director and even action director, all of which experience must have come in handy in this film. 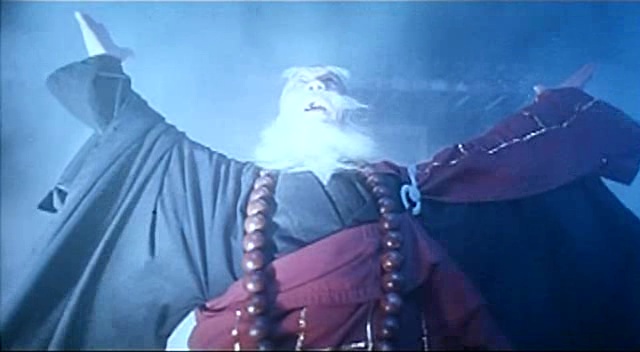 It's the sort of film where trying to follow the plot is a recipe for inducing madness - which may actually be the ideal state of mind in which to appreciate the psychedelic visuals and over the top action scenes. For about half of the running time the film commits the same mistake as Legend Of Zu, of trying to deliver this tale about the affairs of post-mortal warriors whose powers border on the godly (hence the name of the novel, DEMI-GODS AND SEMI-DEVILS, I assume) and which are hence difficult for us mere mortals to comprehend, let alone care about. When the monk's character is moved to centre stage it gets a bit more like the classic Zu: Warriors Of The Magic Mountain though, by giving us a more human character that we can relate to, and who is as mystified by the comings and goings of the various immortals as we are.

It's basically the cinematic equivalent of mixing crack and LSD... a complete sensory overload liable to leave you confused and drooling. It's the sort of film you'll enjoy if you enjoy this sort of film, but is likely to leave you completely nonplussed if you don't. If you don't know whether you enjoy early 90's new wave wuxia films, this almost certainly isn't the film I'd recommend sampling to find out.