Directed by
Genre
Great entry into the Wong Fei-Hung canon 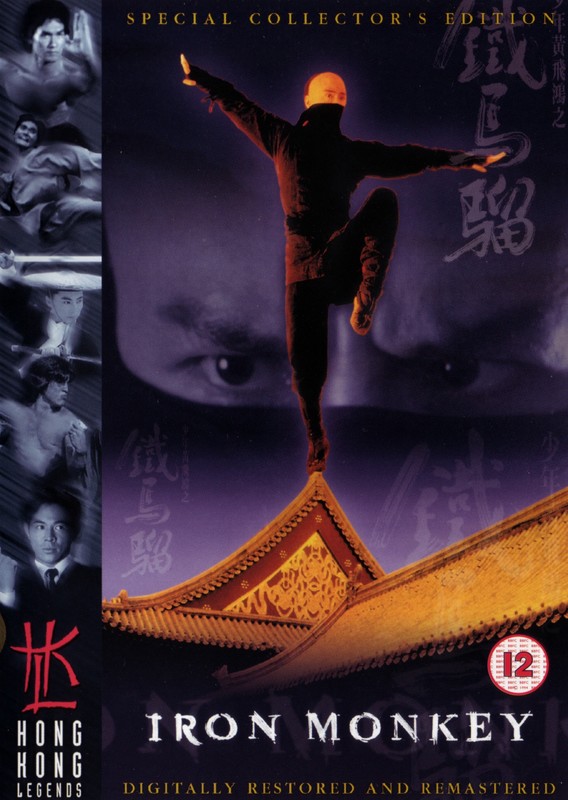 The Iron Monkey is a Robin Hood type figure, robbing the rich and corrupt officials to bring some relief to the poor, hungry and plague-stricken residents of the town. Despite the officials' best efforts, they can not capture him, or even figure out that he is in fact the kindly doctor of the town that treats the injuries he has himself inflicted on them. A very young Wong Fei-Hung and his father Wong Kei-Ying arrive in town (for reasons that are never made clear), and quickly get caught up in the Iron Monkey situation. Recognizing Wong Kei-Ying's superior kung fu skills, the governer puts Wong Fei-Hung in prison and tells his father that he will only be released when Wong Kei-Ying brings him The Iron Monkey.

IRON MONKEY is clearly a close cousin to the Once Upon A Time In China series - effectively a prequel I suppose, coming from Film Workshop with Tsui Hark credited as producer and co-writer, and Yuen Wo-Ping rising from Action Director to fully fledged Director. The film shares a very similar look and feel to the OUATIC films, and the use of the classic Wong Fei-Hung theme tune makes the kinship explicit (unless you're watching the US release with a different soundtrack).

Yu Rong-Guang gets one of his few non-villainous roles as the titular metallic simian, and it does make you wonder why he wasn't given lead roles more often - he's got the looks, the charisma, the acting and the martial arts skills to make a great hero. I suppose he was just too good at playing the villain! Donnie Yen has one of his better roles from the era as Wong Kei-Ying, whilst Jet Li was clearly too old to reprise the Wong Fei-Hung role here but is more than adequately replaced by a young girl called Angie Tsang. She only seems to have made two films, which is a real shame because she is brilliant here - her acting is perfect, and she kicks ass in her fight scenes just as well as the adults... there must have been a career there for her if she'd wanted it! According to Wikipedia, she decided to use her skills as a wushu champion in the Hong Kong police force instead. 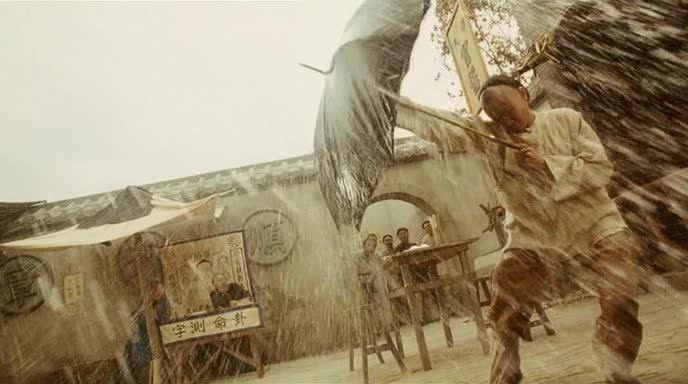 The other major character on the side of justice is Taiwanese actress Jean Wang as the doctor's assistant, who also delivers a brilliant performance and carries herself well in the fight scenes without relying on obvious doubles - and who also seems to have had a much less successful film career than her performance here suggests she ought to. Yen Shi-Kwan gets to play the villain again, and is as brilliant as always - nobody chews scenery quite as maniacally as he does!

IRON MONKEY is a top-notch production in every respect - it clearly had a substantial budget, and was obviously one of those rare Hong Kong films where the script was written before they started shooting... and where this actually works out. The story and characters are well thought out, with the scenes between father and son being particularly touching and adding some welcome depth to the cinematic myth of Wong Fei-Hung.

For once, having a script does not appear to have restricted the creativity of the team on set at all. The film is packed with fight scenes, and contains some of the very best choreography of the wire fu boom... so good that Yuen Wo-Ping reused several sequences pretty much wholesale in Crouching Tiger, Hidden Dragon in fact. Having two seriously talented martial artists as your leads clearly helps when you want to choreograph elaborate, acrobatic action sequences - even when they are heavily wire-boosted. There is a little too much undercranking, a Wo-Ping weakness that Donnie Yen must have encouraged, but the extravagance and creativity of the choreography more than overcomes this problem.

Following ONCE UPON A TIME IN CHINA's brilliant ladder fight, the tradition in the wire fu genre was to stage a climactic fight in which the fighter's moves were dictated by a unique, dynamic environment. IRON MONKEY's climactic fight atop a set of burning wooden poles is a fine example of this, as the collapsing environment becomes increasingly restrictive and yet also offers vital opportunities for the equally matched martial artists to seek advantage. 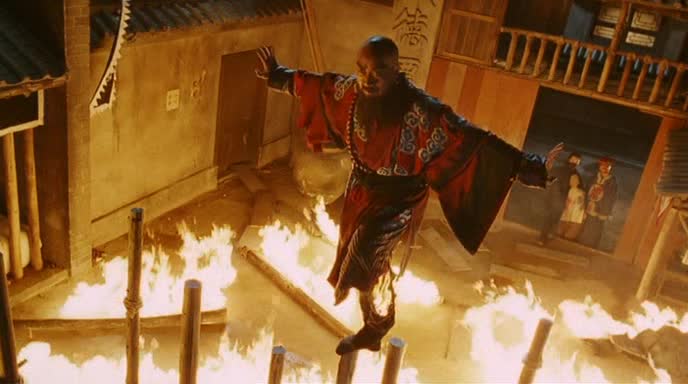 After the success of CTHD, IRON MONKEY was probably the obvious choice for Miramax to dust off and bring to American cinemas, to find out if the interest in Chinese martial arts films post-CTHD would transfer to it. Being MiramAxe they did of course have to cut and edit it, and modify the subtitles to make it a little less "Chinese". They also completely replaced the soundtrack, which is almost criminal given the importance (and sheer brilliance) of the Wong Fei-Hung theme - even if American audiences wouldn't necessarily have understood the context and connotations, it's still about the most rousing theme music ever recorded. It would have been nice (and completely unprecedented) if Harvey "I cut this shit to make it work" Weinstein had had the balls to release the film as it was, but I suppose we should be thankful that he released it in its original language at least. Miramax failed to mention in their promotion that the film was 10 years old, of course, which did lead to large numbers of viewers ironically dismissing it as "an obvious copy of CROUCHING TIGER". I guess that it wasn't all that successful, because it wasn't followed by a tide of other classic Hong Kong films in American theatres.

After the first two ONCE UPON A TIME IN CHINA films, IRON MONKEY is probably the best of the early 1990's wire fu boom. The production values are as high as they got, the script is very tight and the fight scenes feature some of the most imaginative and brilliantly realised choreography in that style. It's a nearly flawless example of the genre.

Naturally, I would recommend bypassing the American release and going for the original - the UK DVD from Hong Kong Legends (now re-released by CineAsia) being the best version that I'm aware of.