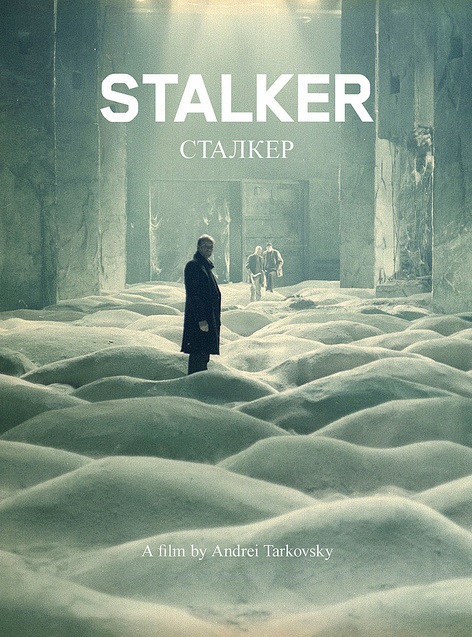 The Stalker is hired by two men - The Writer and The Professor - to guide them through The Zone... which is what stalkers do. The Zone is a region of mysterious origin, where reality is dysfunctional and the normal rules of time and space break down. It is capricious and volatile, frequently fatal to those attempting to cross it, but at its heart lies The Room... a place where wishes are granted.

STALKER is a film which wears its allegorical nature on its sleeve, not even bothering to give its characters names to disguise their roles as abstract symbols, and making explicit the ideologies they will represent as they attempt to navigate The Zone. Each of the clients comes to The Stalker in a state of despair, hoping that The Room will bring them better fortunes, even greatness. The Professor represents science, the attempt to seek The Truth by exploring and identifying nature's inviolable laws and constants. By exploring the physical anomalies of the zone he hopes to develop new theories of the rational, mechanical, natural world to share with his fellow men - and to achieve fame and fortune in the process. The Writer represents art, the attempt to seek The Truth as a human, sociological entity... to explore the meaning and purpose of human existence, to enlighten the world by transforming our understanding of ourselves.

The Stalker begins the film as a more practical man - he seeks only to navigate a treacherous and unpredictable terrain (life) and to ensure that those in his care survive. As the film progresses, this pragmatic facade begins to crumble though, and he becomes an icon of that other putative path to The Truth, religion. Indeed The Room itself becomes a symbol of religious salvation, the prospect of hope and meaning in an otherwise bleak and cruel existence, with The Stalker as guide representing the priesthood.

In other words, it all gets very Franz Kafka. 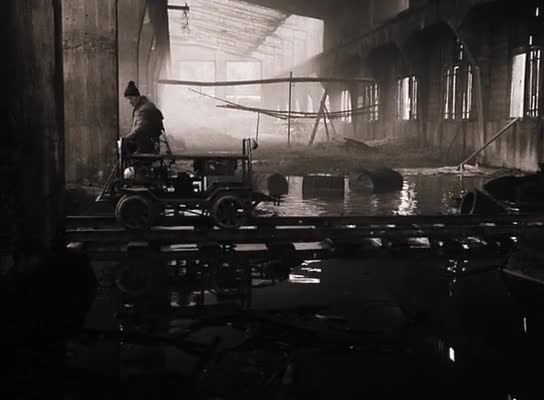 The reductive materialism of science is seen as antithetical to the possibility of hope and meaning in life, and art is seen as an ineffective path too easily distracted by ego and self-indulgence (surely Tarkovsky cannot be fingering himself there, though?) - yet scant evidence is presented that the numerous obstacles and perils The Stalker insists lie between his party and salvation have any objective existence, and as a stalker he is denied the possibility of ever entering The Room himself. The Room is "just over there", he tells his clients at the start of The Zone, but a direct approach is impossible - instead a convoluted and uncertain route must be taken, full of alleged danger with the chance of dying before reaching the goal being high. The State only makes a brief appearance, at the start of the film, where it seeks to prevent the seekers of Truth from even starting their quest - lethally, if necessary.

STALKER was largely filmed at an abandoned power plant and an abandoned chemical factory, two desolate and apocalyptic environments which give the film a powerful, striking look and feel. The film begins in bold, stark monochrome, but when the travellers reach The Zone it shifts to colour - albeit a rather dull, washed out Soviet sort of colour. The sense of danger and toxicity in the environment was apparently more than just an effective visual indicator of existential peril - the premature deaths of several members of the cast and crew, including Tarkovsky himself, have been blamed on exposure to toxic chemicals at the plant.

For the majority of the film there are only three characters present, our three symbols, who alternate between long silent stretches of striking imagery and bouts of high-browed discussion (or more often, monologue). These seekers of truth may be misguided and doomed in their quest, but they are at least motivated (however self-servingly) to make it - in Tarkovsky's universe nobody else even cares. In the coda to the film, The Stalker laments to his wife that the artists and scientists of his society are living empty lives, devoid of meaning and purpose... that his desire to help people achieve their greatest wish by taking them to The Room is thwarted by the absolute disinterest of those he would save. But, he finally seems to acknowledge, it may be that nobody really needs salvation anyway... that The Room is no more a source of Truth and Redemption than any other path people might look for it on. Much like Kafka, Tarkovsky seems to be haunted by the idea that religion - knowing the mind of God, the eternal truth, the purpose of existence - is so critically important that it overwhelms any other human endeavour, but that it is also a fundamentally unachievable goal, an exercise in futility. If it were possible to know with absolute certainty why we were here and what we should do with our lives, it would undoubtedly be a great gift for the species - but for some reason we have been denied a nice clear, concise and empirically verifiable statement of the divine will. Kafka envisaged the situation as being like a trial in which our ultimate fate lies perilously in the balance, but nobody will even tell us what the charges are or how we can acquit ourself, and advocacy on our behalf is inexplicably inaccessible. Tarkovsky seems to be channeling a similar existential angst in STALKER, but without the whimsy and absurdist humour that Kafka brought to his neurosis. 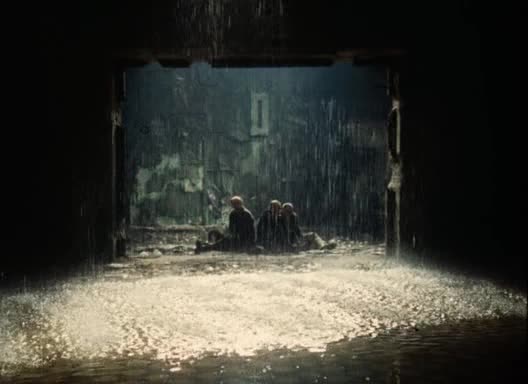 STALKER is actually one of the few films that I would like to see get a Hollywood remake. Replace Tarkovsky's austere, claustrophobic visual style with some slick big budget gloss... replace the trio of abstract symbols with a group of stereotypes who succumb to gruesome deaths in this hostile environment. A mix of PREDATOR and HELLRAISER perhaps. It'll kill half of the world's film critics through sheer apoplexy, I suspect, but it will probably be a better film.

I suspect that STALKER will resonate a lot more strongly with those who have both religious belief and religious doubt. True Believers are unlikely to appreciate the torment of having both an intense craving for salvation and an intense fear that it us unobtainable. Non-believers such as myself are more likely to dismiss the existential doubt as self-delusional and side with the unseen public in the film who are unconcerned and largely unaware of the intellectual and moral perils of The Zone, finding meaning in their lives in some other way which does not depend on Absolute Truth. The Stalker's wife suggests to The Stalker that his secular clients are more to be pitied than to be damned, but the non-theistic viewer might conclude that this judgment applies at least as much to The Stalker himself. After he falls asleep, his wife turns to address the camera and acknowledges that we might find something pitiful in her husband, and that his belief and his quest have brought much suffering to the family... but that she still believes she is better off for having chosen to "follow him", because at least the prospect of salvation - of finding some meaning in life - holds some hope, and without it there would be none. The Stalker has pretty much become Christ by this point.

I think it's a common belief amongst the religious that without religion there can be no meaning and no purpose in life, but I think that most atheists would argue that meaning and purpose can be found in humanist values and beliefs. Whilst the theist believes that Eternal Truth exists and that not to know it must be a terrible thing, the atheist recognises that Eternal Truth is an illusion and its absence is no curse, but instead liberates us to find meaning and purpose in our own values and on our own terms. A life without religion is not meaningless - it is the most meaningful thing that exists in the universe. It certainly need not be a source of doubt and despair, such as religion seems to have been to Tarkovsky or Kafka. 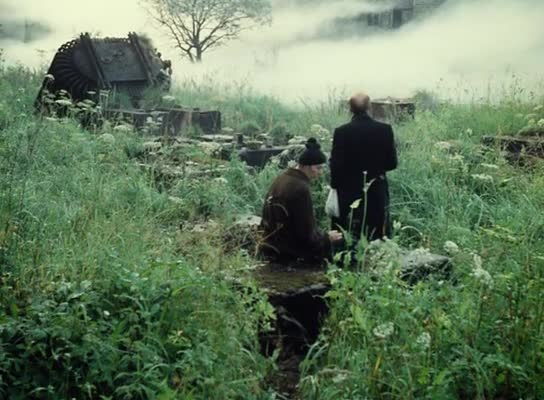 Whatever you think of STALKER's philosophical stance it is a visually stunning film though. The monochromatic sequences are especially striking, and the environment of The Zone provides some incredibly rich imagery. Tarkovsky's direction is typically austere, unmistakably the style of an artist with Serious Things To Say (which presumably The Writer is not!). The symbolism and deeper meaning is all a little too obvious though, and feels more like a lecture - or a sermon - than an attempt to engage the audience and cloak some deeper message or meaning in a narrative form.

"Think about these things! They're important!", the film seems to yell from the pulpit.

Tarkovsky reportedly had no interest in making the film accessable - if the audience were not willing/ready/able to appreciate it, he would rather they leave the theatre than make any concessions to them. Whether you, as a viewer, feel any compulsion to follow Tarkovsky on his personal journey of existential doubt will probably depend upon your own nature and inclinations. If Tarkovsky finds himself, like The Stalker, wandering this territory of possibly imagined perils and mortal consequence largely alone, he does not seem too concerned.

Obviously STALKER is a highly regarded film, currently just scraping into IMDB's Top #250. Whilst it is undeniably visually unforgettable, philosophically it seems mired in territory that I left behind with my teenage years, and which Kafka already mapped with far more wit and insight many years earlier. It is definitely the sort of film that can readily be discussed, deconstructed and debated, and hence has a natural appeal to film critics and film students. It's a film of big ideas and experimental technique, which has got to be good for quite a few academic theses and articles. It's not necessarily something that the average viewer ought to feel compelled to watch, though.