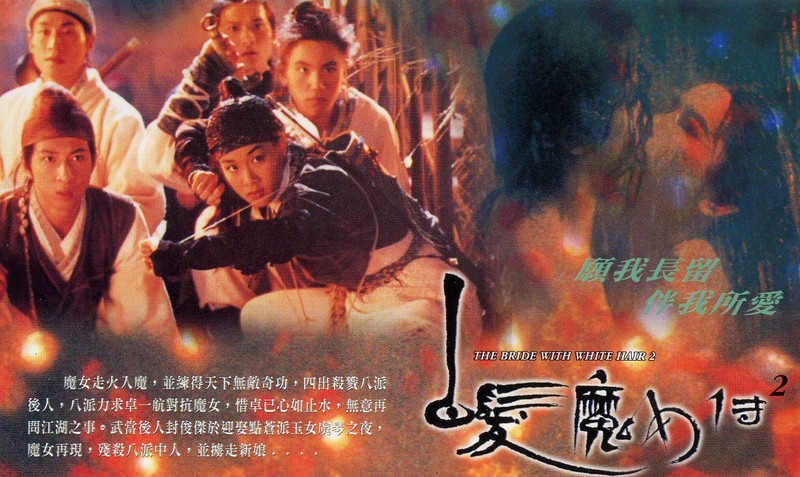 *** contains spoilers for THE BRIDE WITH WHITE HAIR ***

Following on from the events of The Bride With White Hair, Wu Dang clan has been all but wiped out and Wolf Girl Lien Ni Chang has been transformed into the White-Haired Witch, filled with bitterness against her former lover Cho Yi Hang (who has gone flower picking in the mountains) which she extends to all members of Wu Dang, and all men in general. She has built herself a palace where she takes in mistreated women and trains them in martial arts, and captures men to work as servants in roles which are more commonly filled by women in the society of the day.

Only one senior Wu Dang student (Sunny Chan) survived the first film, we discover, and the other clans are anxious that he should begin producing heirs straight away so that the clan will survive, so a marriage is quickly arranged to the rather lovely Lyre (Joey Man). The wedding night is going fairly well until Lien Ni Chang turns up, determined to eliminate the clan and to rescue poor Lyre from the clutches of male villainy.

The clans decide that Lien Ni Chang must be eliminated, and give Sunny Chan the job of leading a group of young clan students against her - the clan elders quite sensibly deciding that this is a job for the promising youth (or not for them at any rate). 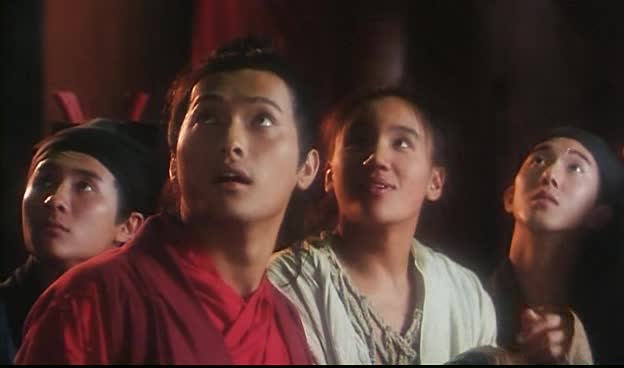 It's rare that a sequel to a classic is also a classic (Swordsman II is one of the few that springs to mind), and it is certainly not the case with THE BRIDE WITH WHITE HAIR 2. As is so often the case, the film-makers seem to have quite misunderstood the qualities which made the original successful and popular, and delivered a sequel with an entirely different tone. TBWWH was an opulent, melodramatic, gothic romance with luscious visuals and an intense tale of doomed lovers, carried by intense performances from two celebrated industry veterans. TBWWH2 is more of a 'rescue the princess' story, which seems to have made a conscious effort to give some fresh young faces a break. It's much closer kin to The East Is Red than to SWORDMAN II - although if we argue that the first Swordsman doesn't count then the parallels between the series are easy to draw.

Brigitte Lin does return as the "Bride", which is lucky as there really wouldn't have been much of a film if she hadn't. Since she has already undergone the transformation in the first film there is much less depth to her character here though - she really doesn't have much to do except for rant about what arseholes men are and occasionally kill people with a flick of her hair. The only time we get to see any of the range of emotions she goes through in the first film is in flashbacks to it - of which there are many - and to some extent in the final scene. Leslie Cheung had evidently figured out the "sequels to classics often suck" rule by this point, and declines to appear for most of the film except via flashback, and briefly in the first and last scenes (the first scene possibly just being unused footage from the original film). 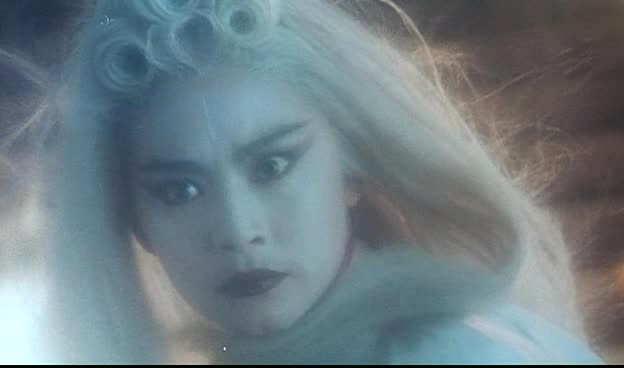 TBWWH2 definitely feels like one of those sequels that was made purely from the inspiration "Hey, we made money off the first film, I bet we can milk it with a sequel", although it may also have been "We've got these awesome sets and costumes and we really should try and get some more use out of them". Certainly it can't have been "We have a brilliant idea for a story, the original was just crying out for further development". Much like THE EAST IS RED, the film basically takes a fairly generic story and tries to shoehorn in references to and flashbacks to the first film in the hope that people's memory of how good the original was will somehow transfer over to the sequel by association. I suppose that can be said about a lot of sequels, but it's never been a successful strategy as far as I can recall. Whilst having Brigitte Lin in full white-haired makeup and costume giving people the stare of death is never going to be unpleasant, it's arguable that the rest of the film would stand better on its own two feet rather than constantly reminding people of the original, in comparison to which the sequel can only look bad.

The young cast members do at least do a reasonable job with the material they're given, though Christy Chung easily steals any scene she's in - and arguably the whole movie. Fresh from winning the Miss Chinese International Pageant, she oozes sassiness and charisma which most of her co-stars lack, and of course looks fantastic. Her constant munching on the butt of a rolled up cigarette and her unique arm-bow weapon make her by far the most memorable of the new characters in the film, though her character feels a little anachronistic and the sassiness of her character is one of the reasons the tone of the sequel is so different to the original. 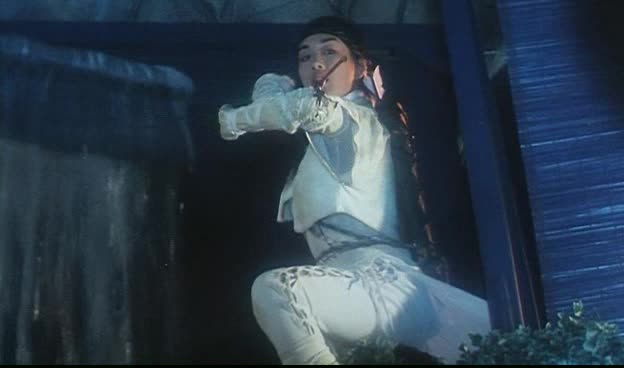 Whilst TBWWH was unrepentant in its tragedy and romanticism, TBWWH2 tends to drift into far more conventional territory whenever Brigitte Lin is off screen, even incorporating elements of comedy. It is this difference in tone that is the biggest problem with the film, really... people who go to watch a sequel are presumably setting out cynical but at least hoping that it will recapture (or copy) the things they liked about the original - but the makers don't seem to have even understood what those things were themselves here.

The film is at least still good-looking, with the production design continuing to be excellent (though the new sets are on a smaller scale to those reused from the original) and the cinematography is still luscious and very stylised. Peter Pau was not on board as cinematographer this time, but his replacements do a passable job of emulating his style.

Had it not been a sequel to one of the most beloved Hong Kong films of the era, THE BRIDE WITH WHITE HAIR 2 might now be regarded as a pretty decent also-ran from the early 90's new wave wu xia boom. As it is, it spends too much time trying to remind us of the first film's greatness, whilst evidently failing to understand what made it great - or not caring to emulate its greatness in the sequel anyway. The result is inevitably disappointment, and the feeling of a cash-in. It's not actively unpleasant to watch, but it certainly can't be regarded as a worthy companion to the film which it follows.