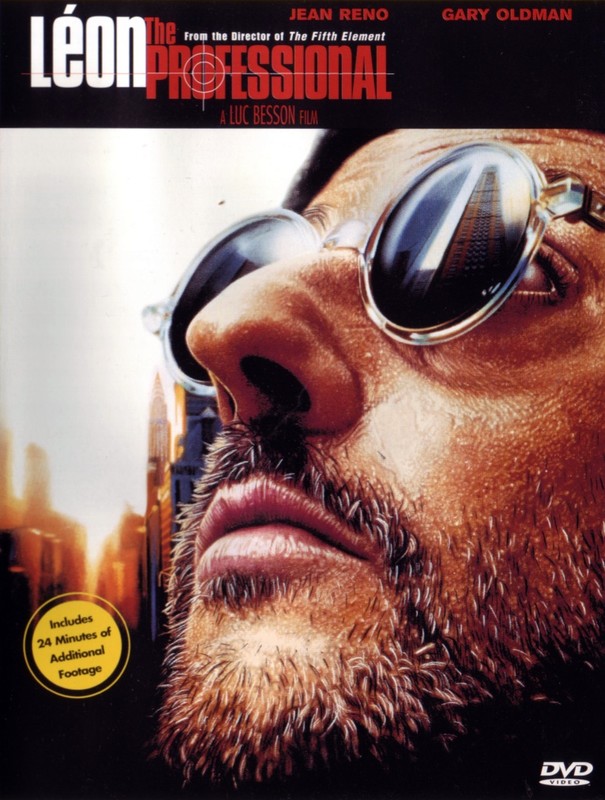 Leon is a 'cleaner', by which he means 'hitman', living alone in a New York apartment with little human contact except for his agent Tony, who took him in when he arrived in New York as a fugitive and trained him as a killer. Tony also helpfully looks after the money Leon earns from his work... like a bank, only better, because there's no paperwork to befuddle poor illiterate Leon.

Mathilda is a 12 year old girl who has had to grow up much too fast, living in the neighbouring apartment where her father and stepmom are low-level criminals distantly under the aegis of an incredibly corrupt DEA agent. When Pops pisses off the boss, the family are dealt punishment in the only way Agent Stansfield knows how to deal it - very violently. Mathilda is lucky enough to be out of the apartment at the time, and to find sanctuary with her neighbour Leon.

Mathilda pleads with Leon to let her stay with him, and later to take her on as an apprentice 'cleaner'. Leon's lifestyle does not really leave room for apprentices, companions or any other human beings, let alone 12 year old girls... his only real friend is a potted plant, which he cares for with diligence. Mathilda somehow manages to convince him to let her stay there temporarily, and as time wears on the two begin to form a bond. It is a strange relationship that develops between the naive hitman and the precocious little girl, with Mathilda convinced that at 12 years old she's done all the growing up she needs to do, and Leon at his unspecified but clearly much higher age feeling that he still hasn't reached maturity. Leon reluctantly agrees to teach Mathilda the basics of his trade, whilst Mathilda decides that Leon would be an ideal first lover for her.

LEON is the film that put Luc Besson's name firmly on the international map, an absolute masterclass in writing and direction which leaves an indelible impression on the viewer (provided said viewer has seen the full length "Director's Cut", anyway). Jean Reno's Leon and Natalie Portman's Mathilda both became iconic characters, and Gary Oldman's Agent Stansfield is one of the most memorable villains in cinema history. The script works by placing two characters with entirely different forms of innocence together in the gritty urban hell of New York's criminal underworld. Despite his age and profession, Leon is the ingenue of the film - a semi-child whose insulation from human contact has stunted his emotional development. He is very good at his job, but almost completely clueless about everything else. Jean Reno's performance captures this deceptively simple character wonderfully, but the stage is almost completely stolen by Natalie Portman in her debut role. Mathilda's environment and family have robbed her of innocence and childhood, and the contrast between her grown-up behaviour and her physical size and build makes for one of the most deeply disturbing performances a young actress has ever delivered. The dynamics between her Lolita-esque precociousness and Leon's simplicity forms the core of the film, and is what makes it so uniquely powerful. Luc Besson uses the potted plant brilliantly as a symbol, with the handing over or assumption of care of the plant marking the shifting of the relationship between carer and cared for between the two characters, and its continued growth showing the mutual flourishing that the characters experience as a result of their relationship.

Gary Oldman almost steals the show from both of them, and certainly steals any scene he actually appears in, with a truly inspired performance. Agent Stansfield is so over the top demented, sinister, soulless and yet utterly camp that he manages to be completely terrifying and yet rather endearing, truly a bad guy you can love to hate. His character's absolute disregard for the law except as support for his criminal enterprise paints a rather damning picture of New York, a city whose lack of humanity is one of the themes of the film. Oldman's performance has clearly been the inspiration for a number of cinematic villains since LEON, though few actors are able to pull off such an outrageous character as convincingly as Oldman does.

Luc Besson's direction is extremely assured throughout the film, clearly showing his love for Hong Kong cinema in the visual style (there is a sort of Ringo Lam flavour to the film, in particular), whilst infusing the film with a moral ambiguity and complex, flawed and fascinating characters that are wholly European. The Hong Kong influence is especially apparent in the action scenes, which are staged and shot with an attention to detail that would make John Woo proud. The cinematography is uniformly excellent, and clearly benefits from either a bigger budget or more modern equipment than the average Hong Kong film is able to utilise.

LEON was one of the most memorable films of the 1990's, an instant classic that only got better with the release of the extended version (probably the first version I saw, I think) - it is currently ranked #31 on the IMDB Top 250, and I would probably put it in my Top 15 films of all time. It seemed to mark Luc Besson as one of the most promising directors working in the world, though this promise did not last all that long. I'm one of those who loved THE FIFTH ELEMENT, but I don't think many people could bring themselves to love JOAN OF ARC a few years later... certainly I couldn't. Every great director has his misfires though, but JOAN OF ARC seems to have shaken Luc Besson in some way as he didn't return to directing for 6 years, and has directed relatively little since. Instead he seems to have focussed on writing and producing films for his company EuropaCorp, who tend to specialise in genre movies - mainly silly, fun, cheesy action films. Whilst many of these films have been very entertaining, they seem unambitious for the writer/director of LEON, which takes an action movie format and manages to fill it with intellect and emotion worthy of the best of European cinema. As fun as Banlieue 13 or Taxi are, they are clearly comfortable to confine themselves to the realm of disposable popcorn cinema.

Besson has started directing again more regularly recently, though I am ashamed to say I have yet to see any of his post-2000 self-directed films (planning to work on that!). None seem to have the kind of ratings or reputation that LEON has, though. A string of great films like LA FEMME NIKITA, LEON and THE FIFTH ELEMENT can't have been an accident, and clearly show that Besson has both vision and talent when he chooses to apply them, along with a great love of cinema. Here's hoping he regains the confidence or motivation to produce another film that can sit alongside those classics without looking a bit immature.