Directed by
Genre
Stylish thriller that sometimes gets a bit silly 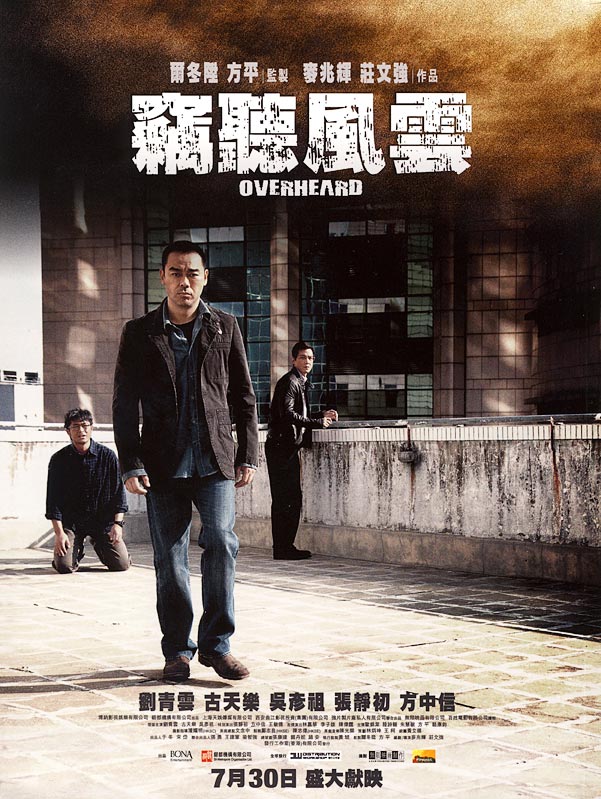 The Commercial Crimes Bureau (CCB) suspect the E&T company of corporate crimes such as insider trading, so they bring in the Criminal Investigation Bureau (CIB) to install and monitor surveillance equipment in the E&T offices. Two months of constant surveillance produces no leads, until one night shift an executive is heard telling a floozy that the next day the company's stock price is going to be manipulated so that it rockets. CIB team member Gene (Louis Koo) is having severe financial problems, and sees an opportunity to get himself out of them. He persuades his colleague Max (Daniel Wu) to erase what they've heard from their logs, and the next day the two of them purchase stock in E&T and wait for it to rise. It seems like a harmless cheat to them, certainly no worse than anything the corporate fat cats they are investigating do on a daily basis. However, it sets in motion a chain of events that quickly spirals out of their control.

OVERHEARD is a slick thriller co-written and co-directed by Alan Mak and Felix Chong, channeling something of the taut cat and mouse tension of Infernal Affairs, but in places losing sight of such concepts as subtlety and throwing in some exaggerated plot developments and overcooked melodrama that spoil the tension and slip into silly land. I find that I seem to enjoy Alan Mak's films more when I'm watching them than I do when I think about them afterwards, which I think is because he does often succumb to cliche to drive his plots forwards, but wraps it in well written dialogue and slick direction which masks it at the time, until you start thinking about what actually happened afterwards. This is only partly true in OVERHEARD, which is by and large very engaging and thrilling whilst you watch it, but has perhaps half a dozen moments that are just too overdone and which took me out of the film whilst watching it to contemplate this. Part of the fault may be in the casting of Louis Koo (why do people keep doing that?)... a good actor such as Lau Ching-Wan can make even ridiculous plot developments seem entirely natural by embuing them with conviction through their performance. Louis Koo just does not have that talent, even though he has improved - slightly and slowly - with age.

There are other scenes in the film which are great though - particularly the opening scene when the team are planting their surveillance equipment, which is done with style and panache and is genuinely gripping even though at that point you have no idea who these people are or what they're actually doing. It's helped by a splendid soundtrack, as is much of the film.

The themes of a surveillance society and the impact of technology on our privacy are nicely woven into the story - though the film is by no means the first to do so. It's vaguely reminiscent of Eye In The Sky, directed by Milkyway Image's regular script writer Yau Nai-Hoi, and there is deinitely a Milkyway feel to the film, with a touch of Johnnie To's slick, stylish direction in the film's more subtle moments, and splendid cinematography. Lau Ching-Wan and Alex Fong turn in great performances, as does Zhang Jing-Chu, and Louis Koo and Daniel Wu scrape by OK. The film did shock me by making me realise I'd missed Michael Wong, who has a small part here as the big boss behind the scenes, and who can still barely speak Cantonese after all these years. He is rather menacing and kind of cool here, having perhaps matured into the whole acting lark after 20-odd years of trying - or perhaps just not having to try very hard with the role he has here, which isn't a complicated one.

OVERHEARD was a big hit with local audiences, winning best film of 2009 from the Hong Kong Film Critics Society and getting plenty of nominations (if only one win, for editing) at the Hong Kong Film Awards. It proved that there is still an appetite for local produce with a local flavour, particularly in the slick, modern thriller genre that Milkyway Image pretty much brought into existence in the late 1990's, and that the afterglow of the writer/directors' success with INFERNAL AFFAIRS hadn't been entirely squandered by their less successful work since then. It has even produced a sequel which reuintes the three main cast members, though apparently all playing different roles.