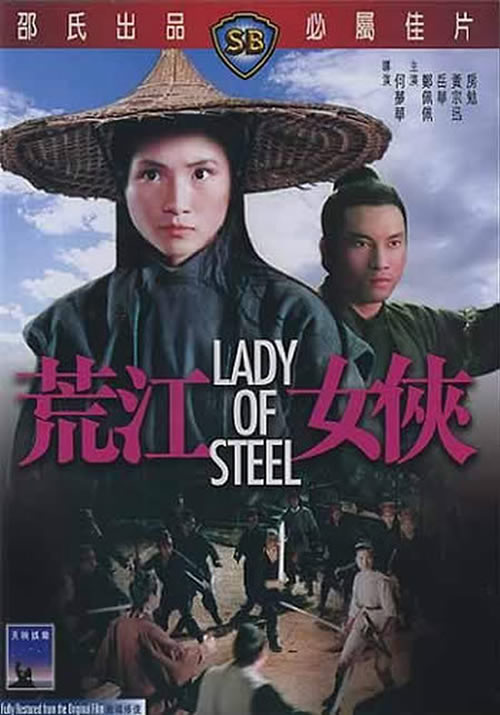 Fang Ying Qi's family is murdered by the evil bandit Han Shi Xiong when she is a small baby. She alone escapes and is raised by a monk who teaches her formidable kung fu skills. As a young adult she wants nothing more than to take revenge for her family, but the country is suffering under a foreign invader and her mentor persuades her to go and offer her help. What would be really neat is if the bandit who killed her family were to be a traitor masquerading as a righteous hero but secretly helping the invaders for personal gain, don't you think?

LADY OF STEEL is clearly quite comfortable to be a "me too" film, with the early scenes where righteous hero Cheng Pei-Pei meets into kung fu beggar Yueh Hua in an inn it's clear that Ho Meng-Hua was happy to follow along on COME DRINK WITH ME's coat tails, as so many films of the era were. There's nothing wrong with that, of course - Come Drink With Me was a fantastic film, and its many imitators were often quite worthy themselves. LADY OF STEEL is a decent enough effort that ticks most of the boxes you'd look for in a film of this genre, but has no spark of originality or style that might make it more memorable. Cheng Pei-Pei is cute, Yueh Hua is too, the villains are villainous and the heroes are righteous. A bunch of stuff happens that you wouldn't necessarily predict before it happens (not the details, anyway - overall the plot is pretty much exactly what you'd expect from the premise). People swing swords at each other, leap backwards onto tall walls, squirt the little bags of red paint they've been carrying around with them over themselves and fall down on the floor at appropriate moments. You've seen it before, you should probably have figured out by now if you like it or not. I keep coming back to these sort of films, so I must do :)

Action is decent by the standards of the day... some occasionally imaginative wirework or camera trickery enlivens the fights more than any actual martial arts prowess from the cast, but for the most part they follow the template established by King Hu rather than showing originality and creativity of their own.

It's nice to find that there are still a few Shaw Brothers period martial arts films that I haven't already seen, especially ones with Cheng Pei-Pei and Yueh Hua in them - and for that reason alone it was a pleasure to watch LADY OF STEEL. Having seen so very, very many of them in the past though, there's little reason to suppose that I will remember anything about this particular example a few years... or possibly days... from now.