Directed by
Genre
Disappointing effort from a usually talented writer/director 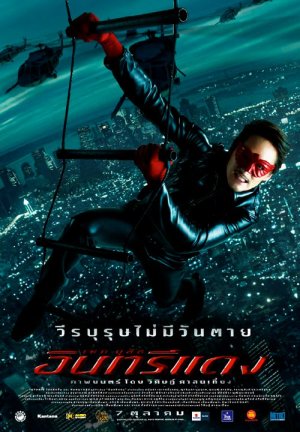 It's 2013 and Thailand is (still) under the grip of a corrupt prime minister, who favours business interests and his own financial gain over the well-being of the citizenry - best exemplified by authorising the building of a nuclear power plant in the poor district of Chumphon, even though he was elected on a platform of opposition to it. The police are in the pockets of the politicians, who are in the pockets of the wealthy - some people start to wish there was a champion of the people, a hero who would stand up for justice. And then The Red Eagle starts killing bad guys.

RED EAGLE is a resurrection of a popular Thai film series from the 1960's which starred Mitr Chaibancha, who famously died on set during the filming of the final scene of what would be the last film in the series (until now), Insee Thong, in 1970. This time around, luk kreung pretty boy and part time Orlando Bloom clone Ananda Everingham plays the titular Red Eagle, and Wisit Sasanatieng writes and directs. Wisit Sasanatieng has proven himself to be one of the more interesting Thai film makers, directing some quite weird and wonderful films like Tears Of The Black Tiger and Citizen Dog and writing the scripts for quality fare such as Nang Nak and SLICE (CHEUN). I hence had high hopes for RED EAGLE, a big budget superhero action movie coming from a director who had already demonstrated intelligence, imagination and a love for classic cinema.

Sadly, those hopes were dashed by the finished product... a cheesy, dull, messy and formulaic action movie with little flare or style about it. The storyline is sub-par B-movie fluff with some clumsy shoehorning in of politics (at the time there was significant civil unrest in Thailand with the 'Red Shirt' group representing Thailand's rural poor clashing with the 'Yellow Shirt' brigade representing Thailand's urban elites and allegedly traditional culture, and it seems clear that the RED EAGLE was showing his colours, so to speak, in this film. It doesn't manage to say anything particularly clever or even coherent about the situation though, other than a general 'corrupt politicians are awful, aren't they?' sort of message, and I suppose 'maybe violence is the answer... except when they use it, obviously'.

In the midst of this there is a 'superhero' who isn't very super (he's like a less gadgety Batman, basically), and certainly doesn't have any personality to speak of, fighting for justice one dead bad guy at a time. Then there's the one honest cop who's trying to bring him to book, and the lady activist who manages to be connected to each of the main characters as well as being the leader of the opposition/protest movement and... err, some fighting, and stuff.

Wisit Sasanatieng has proven himself to be a sharp writer with a good grasp of satire and whimsy, so I was expecting either a giddy fanboy homage to classic action films or a clever satire of them, but RED EAGLE doesn't seem to be either. There are moments when it does seem to be trying to be a comedy, but they're neither frequent enough or funny enough to believe that the overall film is supposed to be one. It doesn't have the feel of a 'director is a fan tribute' production either, though perhaps if I'd seen more of the original films I would recognise more references and touches of homage. I somehow doubt that super-charged motorbikes and sword fights in an elevator shaft were regular staples of the Mitr Chaibanacha films though. Exactly what the film was trying to be, assuming that 'sloppy and tedious' was not the spec, remains unclear.

There is a fair amount of action in the film, though it's not terribly well distributed - most of it comes in an overlong sequence around the half way point, including that elevator shaft fight, which is probably the closest the film ever comes to being fresh and inventive... even though it really has been done before (So Close springs to mind as one example) and isn't done all that well here. Actually the single best scene - certainly the funniest - is probably when the cop's Sikh partner (played by Ron Smoorenburg?) fights off some bad guys in an outdoor restaurant using location appropriate props. Actually, the fact that an essentially rather anomalous side character has most of the best scenes and lines in the film is a testament to how lacking the main cast and narrative are.

It's a real shame that the film turned out so poorly, and hard to explain given the previous promise shown by its director. To top it all off, the film is much too long at over 2 hours... there's a lot of fat that could have been trimmed... most of the film, probably. That's not even the end of it... after all that time the film ends abruptly with a "To Be Continued" screen. Continued it may be, but it's unlikely to be doing so on my screen.