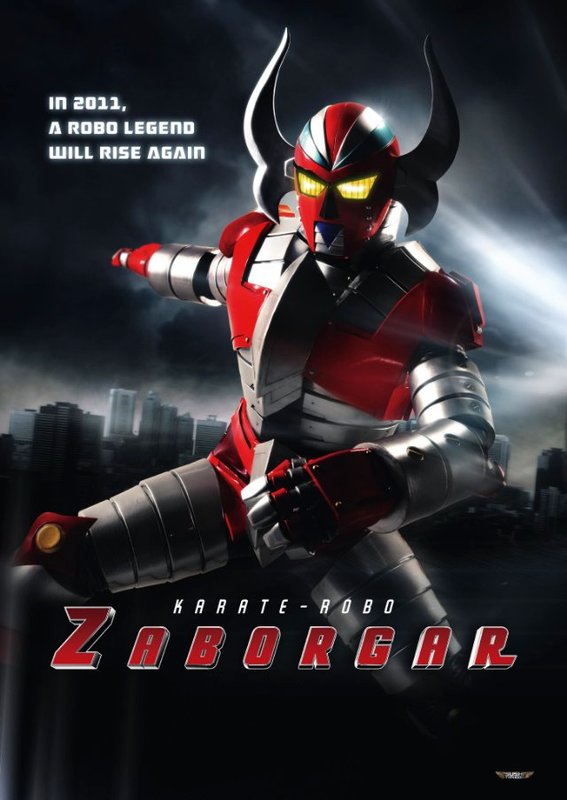 The Cyborg Association Sigma is trying to manufacture the ultimate battle robot, but they need human DNA to build it, so they are trying to harvest the best DNA humanity has to offer - but not making very good choices about it. Special Police Agent Daimon comes to the rescue of a group of politicians Sigma are trying to harvest, fighting them off along with his sidekick and former twin brother, the combat robot (and occasional motorcycle) Zaborgar.

The Cyborg named Miss Borg sets out to destroy Daimon and Zaborgar, but when another group of Sigma members ambushes them and Daimon rescues Miss Borg, the two start to have feelings for each other. Daimon is conflicted, and Zaborgar does not approve.

Flash forward 25 years and Daimon is alone and pathetic, no longer a police agent and no longer having the company of Zaborgar or Miss Borg. Meanwhile, Sigma have bought the politicians and achieved political power, but still dream of building the ultimate battle robot. When they attack Tokyo once more, can the now middle-aged Daimon possibly do anything to help without his trusty combat robot?

KARATE-ROBO ZABORGAR is a remake of a 1970's TV show (clips of which are shown in the end credits, showing that the plot and characters appear to be directly lifted from the show), as remembered by Noboru Iguchi - which is clearly very fondly, whilst recognising the extreme cheesiness of the show. The 21st century version is no less camp, though at least we can be sure it is deliberately so - in fact from the credit clips it appears that the only significant difference is slightly better special effects and a bit more T&A.

There have been a few of these kids show resurrection projects of late, now that the technology has reached the point that it doesn't take much of a budget to produce them. K-RZ is along similar lines to Takashi Miike's Yatterman, in that it keeps the silliness and childishness high but adds a faint hint of maturity in some sexuality and a tiny bit of violence. This sort of approach presumably works best with an audience who are familiar with the source material from their childhood, and can look back at their youthful memories with the justification that it's now tongue in cheek, and a little bit more grown up. It is less effective when the audience (i.e. me) has no fond memories of the show to relive. To my mind a more successful approach was that of Takashi Miike's Zebraman, which managed to incorporate the nostalgic fondness and mature acknowledgement of juvenile naivety into the plot of the film, and deliver a more multilayered experience which was less dependent on any familiarity with the source (in fact I don't even know if there was an original ZEBRAMAN).

The first half or so of KARATE ROBO-ZABORGAR is mildly entertaining, in a "we know it's bad but we meant it to be so that's OK" sort of way, but the fact that we know it knows it is kind of lame is not really enough to overcome the actuality of its lameness past an hour. Thankfully, at about that point the film changes - the jump of 25 years comes with some new developments and a certain amount of maturity and wit that was lacking prior, along with some opportunities for the kind of crazed imagination and invention that we have come to expect from Noboru Iguchi. It's still very tame compared to his other films such as Robogeisha though, still sticking fairly close to its kids show roots and denying special effects master Yoshiro Nishimura any opportunity to indulge in gleeful gore.

K-RZ is probably going to be a hit with two groups - fans of the original show, and film festival audiences at midnight showings. It's the kind of film a large group can enjoy laughing along with (or at), especially if they have fond memories of this sort of show (I was too old for the POWER RANGERS boat personally, I'm afraid!). It's not really well suited to private viewing, though there are bits and pieces which ought to raise a smile in genre fans. It's probably my least favourite Noboru Iguchi film so far though.