Directed by
Genre
Inferior remake of BOXER FROM SHANTUNG 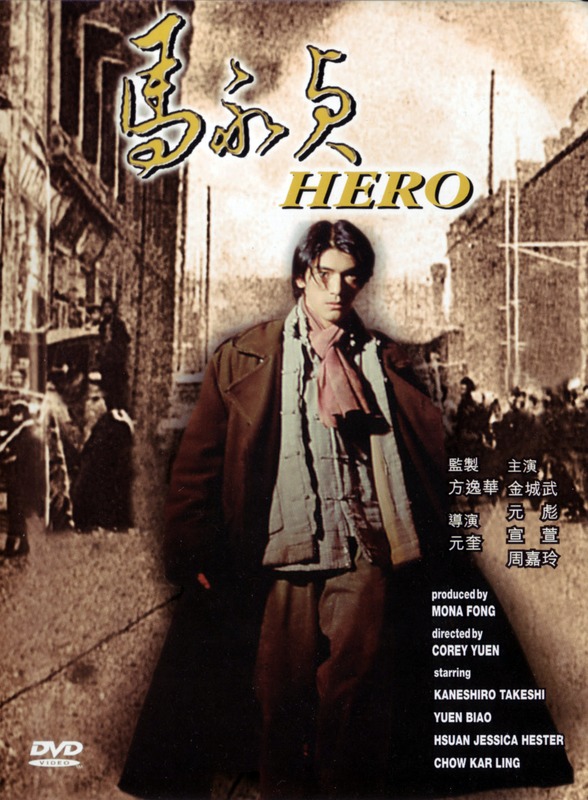 It's the 1920's and Shantung province is suffering from drought. Two brothers head to Shanghai to seek work, but the younger brother, Ma Wing Jing (Takeshi Kaneshiro), sees the wealth that the gang bosses there enjoy and decides to seek his own fortune - with his formidable fists.

Corey Yuen's 1997 film is a remake of the classic Shaw Brothers film Boxer From Shantung from 1972, and it's basically the same but not as good. Chang Cheh and Pao Hsueh-Li's seminal original was a lavish production, epic in scale and featuring compelling storytelling and a star-making performance from Chen Kuan-Tai. Despite the 25 year advance in technology, Hero (1997) manages to feel shoddier and cheaper, with less opulent sets and sloppy camerawork that would have never made it past Shaw Brothers quality control department in 1972. Takeshi Kaneshiro is a handsome fellow, but we knew that already, and such a direct comparison proves that he doesn't have nearly the same screen presence as young Chen Kuan-Tai, nor even a fraction of his martial arts skill.

HERO (1997) does at least have a quartet of little fortunes in the cast - Yuen Biao, Yuen Wah, Yuen Tak and Yuen Kwai (director Corey Yuen), though Corey Yuen and Yuen Wah have entirely action-free roles. When Biao and Tak go toe to toe it is almost worth the price of admission though, and there are a few other scenes which just about justify the effort of watching. There is one scene in particular that is hilarious ("telling lies"), though comedy was not something which I imagine anybody except Corey Yuen and writer Jeff Lau thought BOXER FROM SHANTUNG needed or could be improved by.

I saw this remake long before I saw BOXER, and at the time I found it to be rather enjoyable. Having seen the original - not to mention any number of other superior martial arts films - in the 15 years or so since then, I find myself a lot less inclined to forgive this film its flaws - and its virtues are too thinly spaced to really give it a recommendation. One definite virtue is a fierce final fight scene between Biao, Tak and Kaneshiro. Unfortunately I think all DVD releases of the film have been badly cut in this section (and others) - the only complete version I'm aware of is the Australian VHS tape (which is what I rewatched the film on today).

It was, I suppose, one of Yuen Biao's last at least semi-decent roles, and one of Yuen Tak's more substantial on-screen roles, so fans of those two are probably the audience most likely to enjoy this film... or anybody who just wants to look at Takeshi Kaneshiro being pretty, I guess!