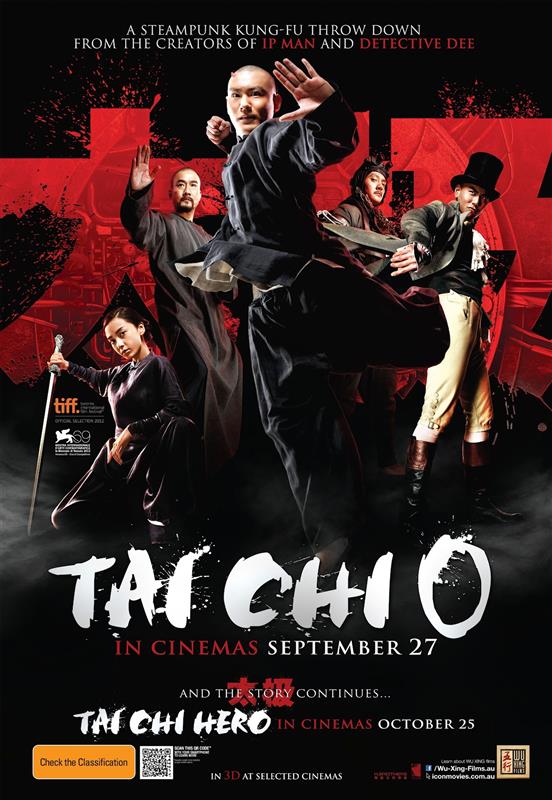 As a young boy, Yang Lu Chan (Jayden Yuan) is marked by a growth on his forehead as a potential kung fu prodigy, and trained by a general named Zhao (Fung Hak-On). However, the army doctor (Bruce Leung Siu-Lung) warns him that the general's style of martial arts is not compatible with his inner energies and that the training will kill him, urging him to go to the Chen Village and seek training in the Chen's soft, internal style of martial arts... that would be Tai Chi, then. However, the Chen Family do not willingly teach their style to outsiders.

TAI CHI ZERO is very much a love song to the martial arts films of the late 1970's and early 1980's, featuring genuine Wu Shu champion Jayden Yuan, guest spots from a couple of old-school martial artists and a great performance from Tony Leung Ka-Fai. The theme may be old but the style is thoroughly modern, with an intriguing mix of visual styles including bits of animation and influences from video games and Steampunk. These assorted influences put it in similar territory to Kung Fu Hustle, though Stephen Fung doesn't quite have the directorial vision of Stephen Chiau, and the mash up of influences feels more contrived.

Martial arts fans are always on the look out for a new star with genuine skills, and Jayden Yuan certainly has the credentials... but not the screen presence or charisma of Wu Jing or Jet Li. He's alright for a new-comer, but doesn't set the screen alight with either his acting or his acrobatics. Leung Ka-Fai and the oddly named Angelababy somehow manage to look more convincing as Tai Chi masters. I guess there is a technique to screen presentation that's just as important as actual martial arts technique - here's hoping that Jayden Yuan is able to develop it.

The film is very slick, with some good quality CGI and exceptionally fluid camerawork throughout - I believe the film was intended to be seen in 3D (don't get the point, personally, but it seems to be the new thing). It feels very expensive, somehow, in contrast to the martial arts films it is a homage too. I have come to accept that the old Hong Kong martial arts film is dead (or perhaps hiding out in Thailand and Indonesia), but the "new style" which Hong Kong's increasingly close ties with the Mainland (and its money) has brought about does have its own promise.

Sammo Hung's action choreography is alright, though there's nothing remarkable in there and the use of wires is too conspicuous in places. It certainly doesn't have the impact of his work in the 1970's and 1980's, but I suppose a film about Tai Chi is necessarily going to be less hard-hitting. Yuen Wo-Ping would have been a more obvious candidate for the job, having done several Tai Chi films (including the equally anomalously numbered Tai Chi II with Wu Jing), but I guess there'd be no point having him retread the turf.

The film ends on something of a cliff-hanger, with promise of more to come... and clips during the end credits showing that the sequel seems to be pretty much ready to roll. In fact, it appears to have been released to Hong Kong cinemas a mere month later, under the name Tai Chi Hero. I suppose I'd better try and track it down!