Directed by
Can music save the world? 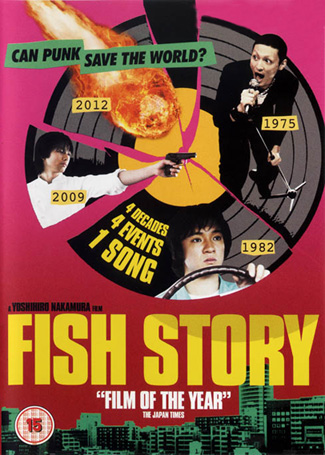 (Music won't save you from anything but) silence

So opined Piano Magic back in 2002. FISH STORY has a different take... music might just save the world.

2012: The world is coming to an end, as a 5 kilometre wide comet barrels in for a collision with earth, pretty much a guaranteed armageddon scenario. In a music shop in Tokyo, the owner introduces his last ever customer to a song by obscure Japanese band Gekirin, who were making punk music a year before the Sex Pistols made it popular.

Flash back to 1974 and we are introduced to Gekirin, struggling to bring their music to the attention of the world, against a music industry that is hostile to innovation and a public that is indifferent to it. Will the band bow to commercial pressures or stay true to their artistic vision?

For the most part, FISH STORY is the story of a song, called FISH STORY, and the band that made it. We also get some stories from intervals between the song's recording in 1974 and its doomsday airing in 2012. For most of the running time you will probably think that Piano Magic had it right, and nobody is getting saved by this song - not even the band that recorded it.

I will say no more about that :)

FISH STORY is one of those films that Japan seems to make in much higher abundance than anywhere else... quirky, off-beat, unpredictable, meandering and subtly clever. Quite disparate elements are woven throughout the film, with the temporally disconnected stories of various unusual characters each quite self-contained. The thread that runs through it all is one of believing in yourself and staying true to your values... of believing that there is value in integrity. This is most explicitly expressed in the story of the band, whose belief in their music - and in particular their song FISH STORY - is challenged from every direction.

Can music really save the world? You might think it's a fishy story indeed. But you never know... it just might!