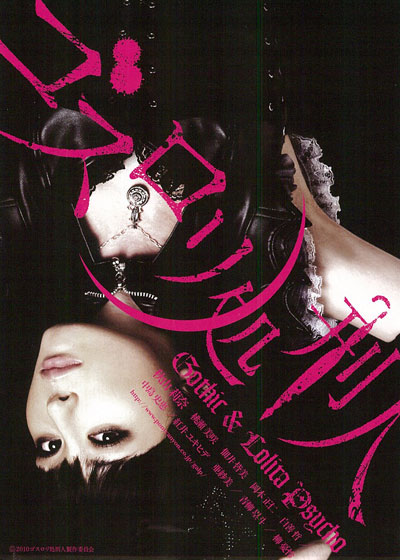 A girl named Yuki takes revenge on the gang that killed her mother, whilst dressed in a Gothic-Lolita style.

I like simple movies. I like complicated movies too, but there's something to be said for a film that can be summed up in a single sentence. GOTHIC LOLITA PSYCHO does have a couple of surprises up its sleeve, but for the most part it's a straightforward case of our Gothic Lolita heroine taking on each villain in turn, and delivering a gruesome death after a suitable amount of fighting.

Unfortunately, it's a concept that's been done better before - Hard Revenge Milly springs to mind as a superior example, for instance. Whilst adding Gothic Lolita styling ought to improve things, on paper, in most other respects the film just isn't very well made. Yoshihiro Nishimura has been brought in to handle the gore, but even he doesn't seem to have been making much of an effort. Fight scenes are relatively well choreographed, with a highlight of the film being the fight between Yuki and the gaijin stunt crew Team 2x, but they don't have anything like the panache of the fights in Versus.

The film has plentiful action and gore, but it lacks the sort of inspired dementia that makes the better examples of Japan's indie action-splatter cheapies so fun to watch. A large part of the blame must go to the lead actress, who is unspeakably bland in a role that should have allowed for a huge amount of character, and is not nearly cute enough for the costume.

GOTHIC & LOLITA PSYCHO is at best an also-ran in the recent wave of silly, sexy, splatter films coming out of Japan - better than some of the real trash like BIG TITS ZOMBIE, but nowhere near the entertainment value of films like The Machine Girl and VAMPIRE GIRL VS. FRANKENSTEIN GIRL.