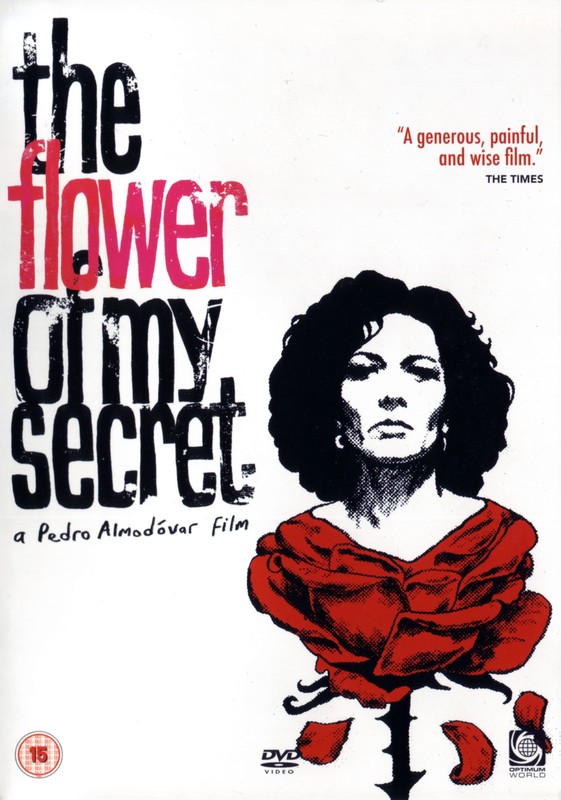 Leo is a writer of trashy romance novels, but when the romance in her own life ebbs away she finds it impossible to continue writing in the style of her Nom De Plume. She wants to write darker, more adventurous works, but her contract with the publisher is very explicit about what they will accept from her.

I had always had trouble remembering what THE FLOWER OF MY SECRET was about, which is not that unusual (the main reason I write reviews is to help my memory), but in this case it appears to be because I've never actually seen it - which means the DVD must have been lying around unwatched for nigh on 10 years. Also not all that unusual, to be honest! Highly unusual for a Pedro Almodovar film though - as one of the most interesting and reliable directors in the world, his films don't tend to linger unwatched in my possession for long.

Watching it now, I have to move the beginnings of Almodovar's shift from wild, anarchic and energetic film-making to his more mature later films back a few years, as the beginnings of the change are already apparent in FLOWER - perhaps indicating an internal conflict somewhat similar to the main character's. Indeed there are some quite explicit signs towards his change of direction, including the plot for Leo's rejected novel being essentially the plot of Almodovar's own film VOLVER, a decade or so later. There are also some nods back to his earlier work, such as the wonderful Chus Lampreave essentially reprising her character from What Have I Done To Deserve This? over a decade earlier. THE FLOWER OF MY SECRET is thus the most obviously transitional work in Almodovar's filmography.

Unfortunately it does seem to be left sitting somewhat between two styles... more staid and mannered than the films that came before it, but not as richly layered and emotional as the films that came after it. It's still a well crafted film, a strong character study of a woman going through a crisis, and in doing so throwing off her naivety and immaturity and discovering an emotionally richer side to herself. Hmmm, still sounding pretty autobiographical I guess!

Marisa Paredes plays the lead role with all the skill you'd expect of a veteran actress under the direction of a deeply humanistic director, but despite her being up front and centre in every scene, the film is really stolen by the characters around her - none of them are given much screen time of their own, but each has a certain richness in their character and life that the main character seems to be lacking. It is their combined influence that eventually allows Leo to overcome her self-centred and self-indulgent attitudes, and become more of a real person herself.

As usual, the cinematography is strong and full of bold colours, and the soundtrack is artfully utilised. So, another interesting work from a director whose entire filmography is full of them - so if I note that it is not one of his own best films, that's not to say that it is a bad film, and coming from anybody else it might be judged quite precious.