Directed by
Definitely interesting, but not sure if I liked it 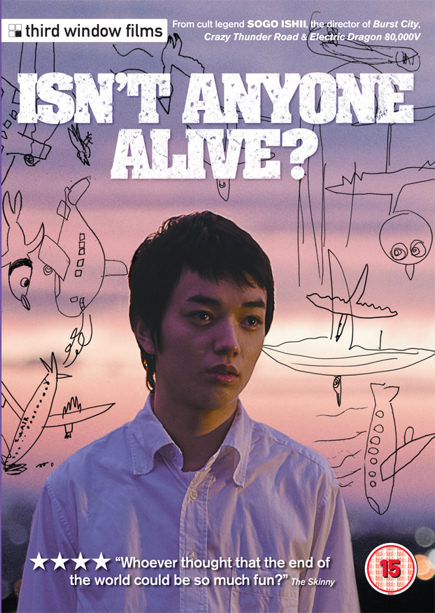 A number of people meet up, for one reason another, in the grounds of a university hospital. Word arrives of a terrible train crash nearby, and people hope that nobody they know was involved. Soon, however, people start dropping dead around the university, each complaining of terrible stomach pains and then gasping for breath first. Could it be related to the train crash? Or to the urban legends about secret experiments conducted by the US military in a basement of the hospital?

ISN'T ANYONE ALIVE? is a strange film - strange enough that on a first viewing I can't even decide if I like it, let alone what rating to give it. There are definitely moments that I like, and it is certainly an intriguing film... but then there are bits of it I did not like, or that left me scratching my head. It took me quite a while to decide that the film is, in fact, a comedy... I will have to watch it again keeping that in mind from the start, and see whether it makes me enjoy bits I didn't like the first time around... or perhaps even stops me enjoying the bits I did like!

I don't know how much to write about the film before it crosses into spoiler territory. I think it is probably fair to say that providing an answer to my questions from the synopsis was not a high priority for Sogo... sorry, I mean Gakuryu Ishii. Part of my inability to adequately assess my feelings about the film is that I'm not at all sure what Ishii's priorities actually were. The most obvious interpretation is that the film is a meditation on mortality, perhaps of age. We are all going to die, and the older a person gets, and the more of their friends don't, the harder it is to ignore or deny that fact (whatever your views are on the finality of death, its inevitability is undisputable). By condensing the experience of friends and family disappearing out of your life, and the diminishing likelihood of your own survival, into an afternoon rather than a lifetime, Ishii might have wanted us to think a little harder about our eventual fate.

On the other hand, if Ishii were to tell me that was actually the furthest thing from his mind when making the film, he was just trying to make a comedy film, I'd have a hard time presenting much evidence to refute him. Perhaps he wanted to explore the different ways people respond to mortality, perhaps he just thinks it's funny when people die. Hard to be quite sure. The film is certainly not an overt comedy though, with much of the humour being drawn from incongruous absurdities and oddities... black by the very nature of the context, but somehow farcical and tragic at the same time. As observed, it took me a while to conclude that it was in fact intentional humour rather than bad dialogue or acting... and it will take a second watch to decide whether that is really true for some early scenes.

ISN'T ANYONE ALIVE lacks the visual flair and kinetic energy of Sogo Ishii's earlier films like Gojoe or BURST CITY - the change of name presumably being intended to telegraph his desire to break away from the unique style he perhaps felt pigeon-holed into by his early reputation. Visually it is fairly unremarkable... generally featuring natural lighting and unobtrusive camera placement, though there are some shots and edits that are a bit more inventive. For the most part it seems to have been a conscious effort not to have the camera and editing room dominate the film as they did in his earlier work, though. There are pros and cons to that... GOJOE was probably the only Ishii film where I didn't find the visuals distracted from whatever the hell was actually happening (it might even be the only Ishii film where I've made it to the end). Certainly a punk-rocking handheld camera would have been entirely inappropriate in this film - though a little bit more style wouldn't have hurt it. The music is very good, at least.

It's not hard to find and point out flaws in the film, but overall I did find it intriguing and a little mystifying... which is to say that I enjoyed it, I guess. I think that means I liked it... but it's one of those films where I can't quite accurately read my own feelings, on first watch at least. I suppose I'll have to fill in the score if/when I watch it again!