The Foreign Duck, The Native Duck And God In A Coin Locker (2007) 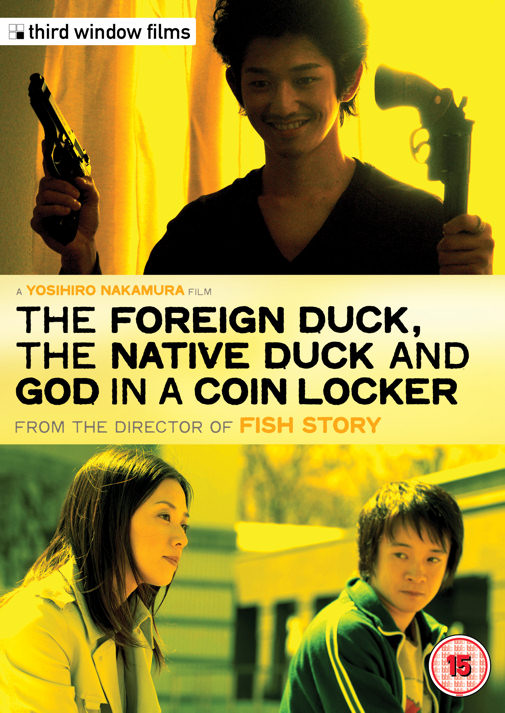 An awkward, shy student named Shiina moves into a small apartment in Sendai to begin university there. When his neighbour Kawasaki hears Shiina singing Bob Dylan's "Blowin' In The Wind" he invites him in and offers the hand of friendship - with a catch. Kawasaki tells him about another neighbour, a young man from Bhutan, who is isolated and withdrawn after losing his girlfriend. Kawasaki wants to help the Bhutanese man... by stealing a dictionary from the book store to help him learn Japanese. Shiina wants nothing to do with the plan, being as mild-mannered a character as you could meet - but Kawasaki's charisma eventually persuades him to take a minor role in it.

The two make an unlikely pair, with Shiina being as awkward and geeky as only Gaku Hamada could make him, whilst Kawasaki is handsome, achingly cool and... a little bit odd. As Shiina meets other people around the university, he begins to hear stories - with the picture presented about some of his new friends by others being hard to reconcile with the picture they paint of themselves. As events unfurl, Shiina discovers that he has been drawn into a story that is not his own, and which has been playing out since well before he arrived.

THE FOREIGN DUCK, THE NATIVE DUCK AND GOD IN A COIN LOCKER comes from the same author and director as Fish Story, and obviously has one of the best titles ever. Much like FISH STORY, by the time the end credits roll the meaning of the title will seem obvious in a way that could never have been predicted at the start, and it is indeed exactly the right title for and a perfect summary of the film.

The story of TFDTNDAGiaCL (long even in acronym!) is not quite as fractured and jigsaw-like as FISH STORY's, though it is another film where later happenings cast earlier events in a different light, including some that seemed irrelevant or innocuous at the time. Because Shiina relies on the testimony of others for his understanding of the people around him, it takes a while for fact and fiction to become distinguishable. Shiina is a naive, trusting sort of guy - and the story he has been drawn into turns out to be darker and more tragic than he could possibly know at the start.

One of the themes that FOREIGN DUCK addresses is Japanese xenophobia, though it does not really tackle it head on. My gaijin friends who have lived in Japan tell me that whilst overt racism is not common, the distinction between the foreign and the native is endemic in Japanese culture (even to the extent of having a written alphabet solely for loan words from other languages), and it is very difficult for a foreigner to be accepted there. It's a theme which is not often addressed by Japanese cinema, though it is present in several of Takashi Miike's films, and in Shunji Iwai's sublime Swallowtail Butterfly. Other than noting its presence and lamentability, the film doesn't really say a lot about it though - isolation is not exclusively the territory of foreign ducks here.

Director Yoshihiro Nakamura has delivered another intriguing film, one which keeps the viewer uncertain about what is really happening for a fairly significant portion of its running time, and which impresses when it does play its hand at last. The main characters are well drawn and the film presents them very empathically. It's a story with surprising depths and fresh perspectives - a solid little indie gem.