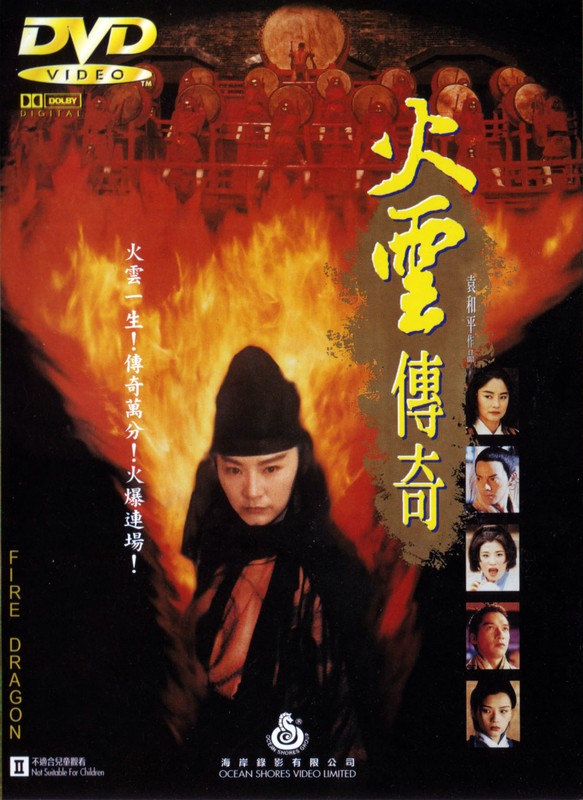 A letter detailing the corruption and brutality of a regional prince is entrusted to the care of Max Mok for delivery to the capital, so the prince sends his toughest fighter - Fire Dragon - to recover it. Whilst escaping from Fire Dragon, Mok's seal of authenticity is captured by a circus leader, played by Sandra Ng, who decides that the price for returning it is Mok's amorous attentions. Fire Dragon herself (for it is Brigitte Lin behind the mask) tries to ingratiate herself with the troupe in order to discover the location of the letter, and is gradually changed by her exposure to non-insane, non-violent people.

FIRE DRAGON is very much in the mold of Swordsman II, with Brigitte Lin turning in a distinctly Asia The Invincible-ish performance when masked and flaming, contrasted with a more subtle performance of deception and feigned vulnerability when she is unmasked - which, ironically, is when she is most in disguise.

Like many Hong Kong films, it seems that shooting was commenced with only the outline of a story, and the running time was padded out with a reversion to default filler - mostly slapstick and pratfalls. Luckily most of the responsibility for this material falls on Sandra Ng, who is at least able to make it amusing. The film is bookended with action, which is where it most shines - with Yuen Wo-Ping in the director's chair there's never any doubt that there will be some spectacular and imaginative choreography, and so it is - particularly in the quite literally explosive final reel.

Whether the interludes of comedy and romance strike you as an annoying distraction from the action or as welcome variety and spice will largely depend on taste and/or mood. It's at least well enough done here that it isn't as irritating or ruinous as such mixed content has been known to be in other films of the genre. If you're amenable to some genre crossing then FIRE DRAGON is a solid production in most respects - and if not, then the action is at least of a high enough calibre to be worth a look.