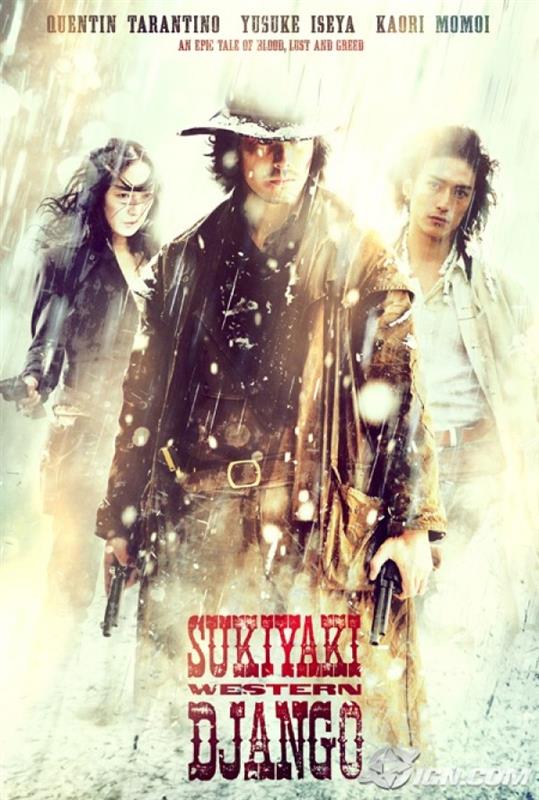 A lone gunslinger wanders into a town which is under the thumb of two warring gangs - the Reds and the Whites, drawn there by rumours of gold. Will the stranger tip the balance of power in favour of one group or the other, or does he have his own agenda?

SUKIYAKI WESTERN DJANGO is Takashi Miike's homage to the Western genre, and an altogether very strange beast. When I first saw it, I was decidedly unimpressed... it seemed that the arrival of international recognition, increased budgets and creative freedom had turned Miike self-indulgent, seemingly determined to show that he was more than just a shock jockey by proving his arthouse credibility. SUKIYAKI does sometimes feel like an art movie wrapped in genre trappings, with sometimes extreme stylisation and surreal plot and dialogue... whilst on the other hand clearly being an affectionate homage to genre films.

One of the oddest, and most jarring, aspects of the film is Miike's decision to shoot it in English - despite a Japanese cast whose ability with the language varies from modest to non-existent. Native English speakers will probably still find themselves needing subtitles, as a result. This results in some very awkward, stilted dialogue and performances... it feels more like a bunch of people play-acting at Cowboys & Indians.

Some 5 or 6 years later, watching it again, I was initially no more impressed... until I realised that play-acting is exactly the right perspective to view the film in. It is genre homage filtered through the perspective of a childhood game, then filtered again through a very adult perspective of the violence and real life, historical misery that lies behind those childhood games.

No wonder then, that the film is such a strange beast, flitting wildly between a number of different tones, with various factions representing different perspectives on the Western genre, and the archetypal Cowboys & Indians tales and games. Whilst the nameless hero is clearly love of the genre, other characters represent a modern, grown-up amusement at its naivety, whilst some have surprisingly rich, poignant and tragic tales to remind us that this is history, at its roots.

SUKIYAKI WESTERN DJANGO is perhaps most comparable to the Thai film Tears Of The Black Tiger, though comparisons with Quentin Tarantino were also inevitable even before he made his own "Django" film, and even if the man himself didn't appear in it. There are certainly shades of Kill Bill in it - Tarantino's homage to the movies that inspired him from the East being answered by Miike's homage to movies that inspired him from the West.

I'm still curious how the film would have been if the cast had been allowed to speak their native language - certainly it would have made the film more accessible, but once you accept that the play-acting aspect is part and parcel of the film, not a distraction, it does perhaps add something that the film would otherwise have lacked. Whether that was Miike's intention or not, we'll probably never know.