Directed by
Perhaps the strangest thing you will ever see 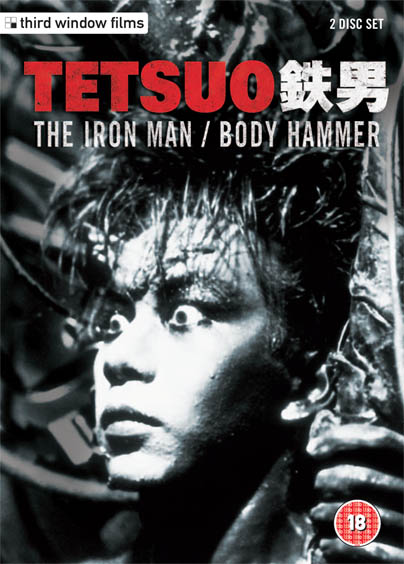 After a hit and run accident, a man begins to mutate into a cyborg amalgamation of flesh and scrap metal.

Shinya Tsukamoto's first feature length (just about) film is about as experimental a piece of cinema as you're ever likely to come across, and is the primary reason why he's pretty much the godfather to Japan's independent cinema scene, and an idol of fans of extreme cinema worldwide. Tsukamoto channels ERASERHEAD and VIDEODROME, via H.R.Giger, Einstürzende Neubauten and Sogo Ishii. And then some.

TETSUO is a barrage of bizarre imagery, noise and concepts - one of the first films to feature the kind of cyberpunk body morphing that has become a staple of Japanese cinema, still alive in films such as Tokyo Gore Police and Meatball Machine. Shinya Tsukamoto's trademark style of wild, hyperkinetic camerawork and intrusive, terrifying sound design are at their most extreme in this film - there is virtually no dialogue throughout, it's all about the imagery.

It's not an easy watch, to be fair... any longer than its 67 minutes and it would definitely be starting to outstay its welcome. It's intensity never lets up from start to finish, and with a camera that swings about as much as Tsukamotos, and the epileptic editing and migraine soundtrack it's not a soothing experience. I think it's fair to say the plot isn't going to bring any deep insights into the human condition, either, so its short running time is probably a blessing.

TETSUO's influence is undeniable, e.g. Darren Aronofsky's Pi certainly owes it a large debt, and its presence is felt in the films of Yoshihiro Nishimura and (to a lesser extent) Takashi Miike. Whether you find it enjoyable or not will depend on how much value you place on uniqueness, extremity and flat out weirdness. It certainly has all of these in spades - a condensed version of Tsukamoto's personal vision and favourite themes, many of which would be teased out and given more space in his later work.

Definitely one of those films that you should have seen, either way.