The Extraordinary Adventures Of Adèle Blanc-Sec (2010)

Directed by
Not a return to glory for Luc Besson 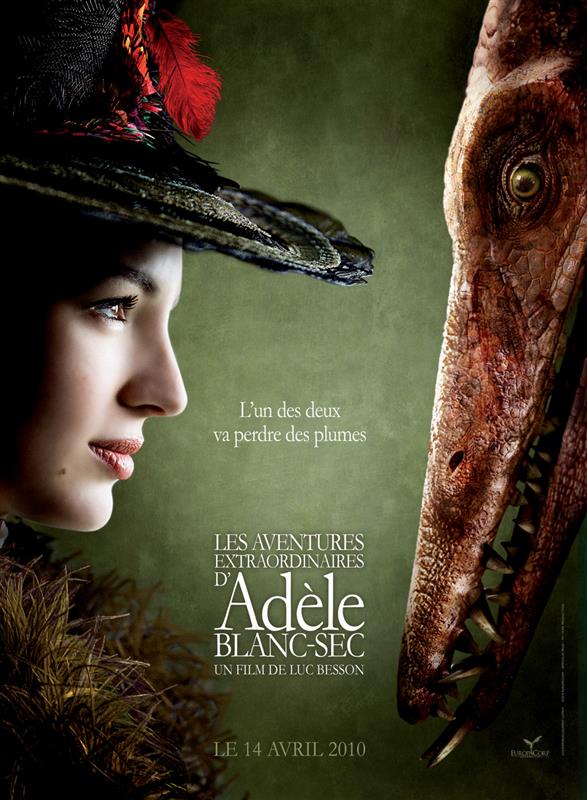 Author and Adventuress Adèle Blanc-Sec heads to Egypt to find a mummified doctor, in the hope that he can be brought back to life by her friend in Paris, and use his ancient medical knowledge to heal her sister, who has been in a coma since a freak tennis accident 5 years earlier. Her friend has problems of his own, however, after accidentally releasing a pterodactyl from a fossilized egg from a museum.

"Amelie meets Indiana Jones" is how Film 4 introduced the film, and that's about right. You get the 'Boys Own Adventure Tales' story of sassy, tomb-raiding Adèle coupled with a colourful cinematic style and air of French whimsy straight out of Amelie. The fact that the source material is a comic series is quite evident, with many visual touches and especially the acting feeling much like they have come from the pages of a comic book from the early 20th century (apparently the actual comics were from the 1970's, but they feel like they could and should have been written many years earlier).

What we don't get with the film is any sense that Luc Besson has got his "mojo" back after his long hiatus from directing feature films. The easy comparison to other films is possible because "Adèle..." has very little style or character of its own, as imbued by its writer-director. It feels too much like a director making a film how he thinks other directors make films, rather than following a personal vision.

It continues to puzzle me what happened to Luc Besson after THE FIFTH ELEMENT. JOAN OF ARC was clearly a turkey, but every director has at least one in his history. It seems to have destroyed Besson's self-confidence though, instigating a move out of the director's chair and into a writer/producer role, focusing on entertaining but lightweight genre films rather than the more ambitious projects he had been involved with previously. I had hoped that his return to the director's chair was a sign that he had regained that confidence, but his failure to project any particular sense of vision or style in this film suggests he still finds himself uncertain of his abilities.

The fact that the plot of the film makes little to no sense is hardly a criticism... I don't think it was ever particularly intended to. Debating whether a 5000 year old Egyptian doctor would really have greater medical knowledge than a modern French doctor is pretty pointless when you have a 135 million year old pterodactyl terrorising the city at the same time.

Surprisingly, the special effects in the film look rather dated - modern CGI is often only possible to detect because of the impossible things it allows film-makers to depict, but here the low quality rendering and animation stand out like a sore thumb.

If the film has any virtues, the lead actress Louise Bourgoin is probably the main one - not because she's a brilliant actress, necessarily, but she does give the character an appropriate amount of sassiness, and is nice to look at.

I suppose some slack can be cut if you treat THE EXTRAORDINARY ADVENTURES OF ADELE BLANC-SEC as a kid's film, as it probably contains enough elements to entertain a younger viewer, who might not be so peturbed at the lack of inspirational talent once suggested by films such as Leon: The Professional to be found here. I suppose that taken on its own merits the film is... still pretty mediocre, to be honest.