Directed by
Very British collision of genre and style 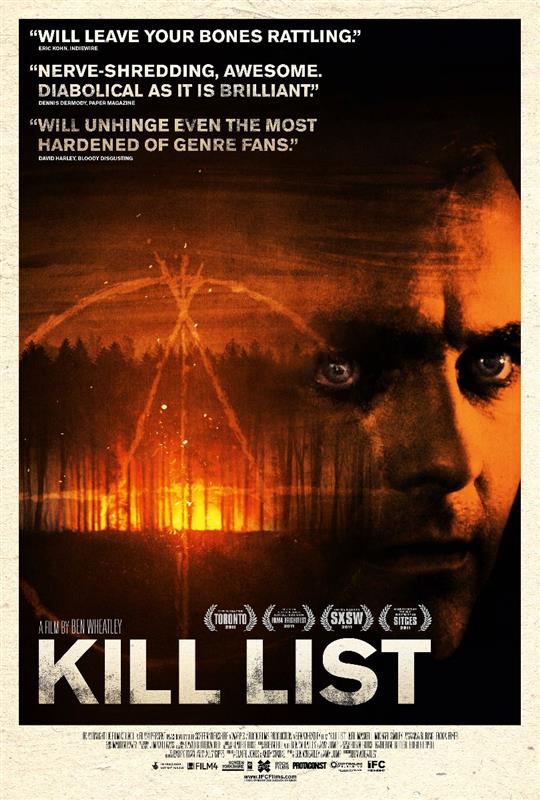 Jay and Gal are Iraq veterans returned to civilian life, but using their skills and training to turn a living as hired killers. They haven't worked for 8 months though, since a job which evidently went wrong (in ways never specified), but as financial worries and household stresses build up, they agree to take on a UK job. A client gives them a list of 3 people that he wants dead.

The duo set off to do their work in a professional mode, but the job starts to uncover signs of something sinister going on around them, which gradually pulls them off track - and pulls the film itself into a quite different mode.

Having been off work ill for a few days I've had time to take a chance on a couple of films by UK Indie director Ben Wheatley on Film 4. KILL LIST and DOWN TERRACE both feature an unusual collision of genre and style, delivering genre movie content in the framework of a kitchen sink drama, with results that are unmistakably British. Whilst DOWN TERRACE is a pitch black comedy, KILL LIST is infinitely more black than it is comedic. This time family dynamics are the wrapper in which a brutal horror film is lurking.

The film serves up some well written and complex characters, with highly believable dynamics, before thrusting them into an altogether more macabre scenario. The film is occasionally extremely violent, but builds its tension and terror at a methodically slow pace.

The lead actors all do a superb job - convincing and likable despite their flaws. Wheatley's direction is mostly understated, even during the moments of extreme violence. The result is that KILL LIST is probably the most enjoyable British film I've seen since DOG SOLDIERS.