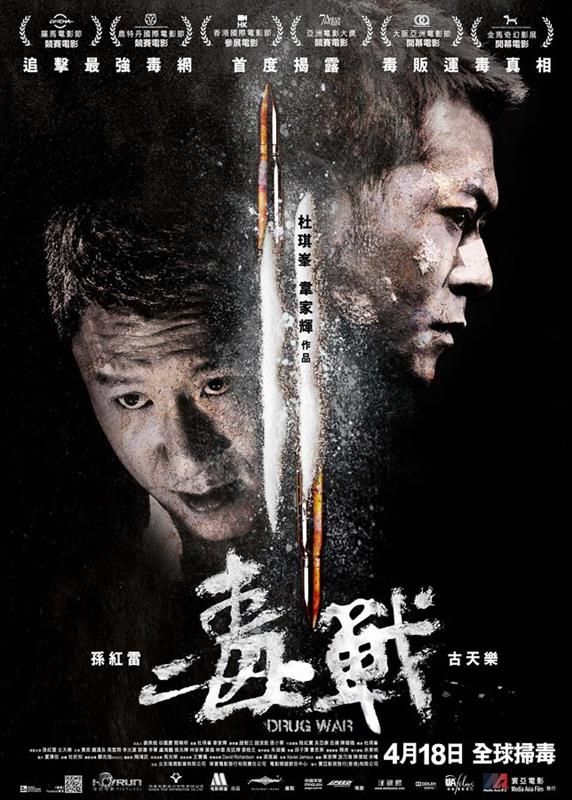 Hong Kong drug manufacturer Louis Koo is arrested by mainland police, and agrees to work as an undercover informant to bring down the criminal gang he is involved with, in order to escape the death penalty he would otherwise be facing.

Johnnie To really made a name for himself in the wake of the 1997 handover - when the biggest names in the industry left to try their chances in Hollywood, Johnnie To stepped up and pretty much took over in Hong Kong. His production company Milkyway Image released a string of films which made a big splash overseas and at home (not necessarily the same films in each case), and whilst those who had Exiled themselves to the US mostly ended up coming back with their tails between their legs and looking to China for investment and a market, To seemed to have carved himself a pretty comfortable position without leaving home.

However, the lure of the mainland seems to have at least tickled his curiosity eventually, and DRUG WAR is his first venture into the mainland co-productions that are the bread and butter of Hong Kong's film industry these days. Getting into bed with the mainland is a bittersweet prospect for a Hong Kong film maker... whilst it brings much larger budgets and access to equipment and manpower Hong Kong films have rarely experienced - and of course a gigantic market for the finished product - it comes with a hefty price tag: Heavy-handed government censorship. It's famously hard to get a film approved by the mainland authorities, and film-makers have to be very careful about what subjects they cover and how they present them. Most famously, films must not allow the bad guys to win - crime does not and must not pay, in Chinese cinema.

Given the restrictions that To must have known he was working with, DRUG WAR still manages to come across as classic Milkyway Image. The tale of uncompromising anti-narcotics officers engaged in a high stakes game of cat and mouse with a ruthless criminal gang dwells on procedure in obsessive detail, and develops its characters with To's trademark economy of exposition - "show, don't tell" is very much the house motto.

The head of the team, Captain Zhang (Sun Hong-Lei) will stop at nothing to bring down the criminals, who know all too well what the stakes are with China's stance on drug trafficking. At times the film does seem a little bit like "super cops battling evil villains", where Milkyway Image's films have tended to be more morally neutral or ambiguous, and one wonders if that is To playing to the Chinese authorities... but he still manages to stamp his mark on the story by the end. Expect The Unexpected springs to mind.

Whilst still quite far from my favourite Johnnie To film, DRUG WAR shows that he can play the Mainland's game as well as any other director who has tried - probably compromising far less than most who have ventured there, in fact. Hopefully the film will do as well in China as it is sure to do overseas (it's clearly going to be a festival hit!).